Making a Saga out of it.

OK, blistering hot on Tuesday night and only eight of us braved the heat to get to the club, Simon was introducing me to Saga, I had played once before with the 'big' Saga armies but this time it was straight out of the box vanilla. Simon had a Viking army and I put together an Anglo-Dane force from my Saxons, Vikings are an army like the Normans which I just wouldn't build, I do like the idea of the Anglo-Danes, a proper army having settled in nice and comfortable in this green and pleasant land.

Not a lot to the game, we both built a six point force which gave me three Hearthguard, two Warriors and a Levy along with my Warlord, out of the corner of my eye I watched Simon put units together info larger 'mobs' so I did the same with two of the Hearthguard. I quickly noticed he did not go for a Levy. We played a simple meeting engagement so that I could get a taste of the rules etc. As we deployed I had an idea to rush his left flank while holding off with my left, I managed fairly well and bounced back a group of Warriors with mine, my Hearthguard attacked as well and wiped out their foes however the enemy Warlord managed to wipe out mine in return, a real shame. My own leader now took on the enemy commander and they managed to kill each other, I threw some dreadful saving dice, one save would have kept my guy in the fight, but.. 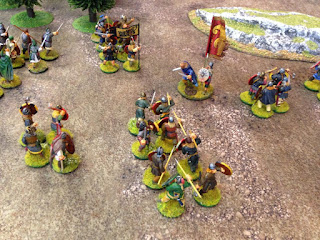 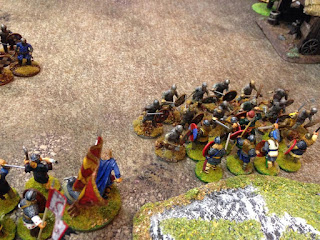 As Simon pulled his last Hearthguard unit over to join in the melee on his left I pounced on his right, I wiped out some Warriors but was left with one man, my Levy had managed to launch some javelins and got one kill throughout the game. We eventually got down to lone fighters and a full, but cautious Levy before we called a halt. The game had actually ended when the two leaders dropped but we fought on rather than start again. 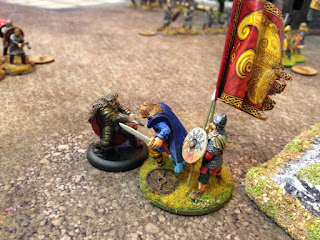 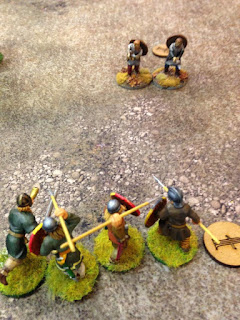 What did I think, well, I think it is a boardgame with figures, I thought it was a wargame but there is no morale, I knocked back several units but it had no effect on them, I also thought it a bit strange that one unit can only fight one other unit, unless you throw in the Warlord, so you cannot gang up on anyone with a clever piece of maneuvering. It is very bloody and quick especially if you know how to use the Battleboard which gives you abilities to help you win a fight or disrupt the enemy. This is the crux of the game, if you know your Battleboard you can cause havoc to the enemy. I enjoyed the game for what it was and it was a nice change and perfect for a club night, I would certainly play again and it was good of Simon to take the time to bring it along and help me through it, it is not a complicated game but you would have to play a lot to gain the best from the subtleties. Simon is building up some 'big' Saga Samurai forces, I look forward to that.

Very busy with maps at the moment, along with Leipzig and a military history of the 20th Century I have completed Maharatta Wars, Western and Italian Fronts for WWI, Ottoman and Muscovite Wars and now Wars against the Dutch, much of this is for Helion's Century of the Soldier series which is very popular at the moment with new material coming out of Europe and Russia. 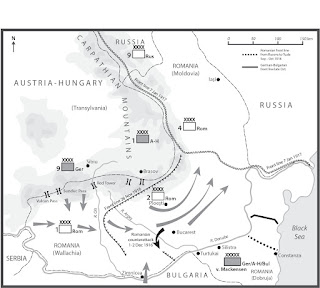 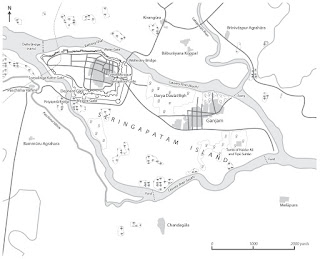 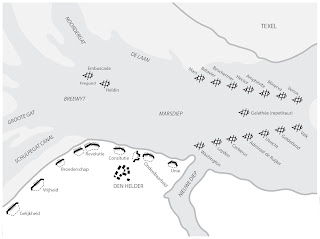 I am away from tomorrow at Tankfest, the annual Tank Museum bash at Bovington, myself and my two sons are going, we found out too late that there is a Rick Stein's within shooting distance but we noticed too late to get a booking for Saturday night. No matter, I am looking forward to the weekend and have a hat and suncream, and I am taking train south this weekend after my eight hour nightmare last Friday on Britain's roads or lack of them.

I have another SYW unit complete, but I have no time to show you just now, I'll put it up when I get back.

Posted by George Anderson at 19:35