Chain of Command last night and not a good start, pitch black, decided to go down Borwick Lane, the local rat run, to get to the A6, too many cars and one clipped my wing mirror, not a happy bunny although there seems to be no real damage, will check this morning in the bright, no, grey light of day.

Anyway, I got to the club early to grab a table and set up a quick battlefield to introduce Too Fat Lardies forum member Dave to Chain of Command, so a novice playing a newbie. I kept it simple and organised a scenario straight from the book, a British attack on a German position, I also weeded out all the troops and vehicles which would not be used in the scenario so that my old back could take the strain of three boxes and all the paraphernalia. It was just as well I got there early as there was almost a full house again this week.

Dave duly turned up as I was half way through getting the table ready so a quick introduction as I trailed back and forth from the store cupboard. Dave chose the Germans while defending, I rolled for supports and got a lousy six, the Germans get half that and went for a green infantry squad giving him four altogether, I like a vehicle of some sort (I have enough) so I went for a Stuart light tank and an adjutant as I planned to use my two Senior Leaders heroically in the front line. I did fine with the patrol phase and managed to get my jump off points half way up the table, the Germans however had theirs right next to two large buildings which dominated that side of the table,. The Force Morale throws for both sides were a poor eight points. A dark cloud was approaching. 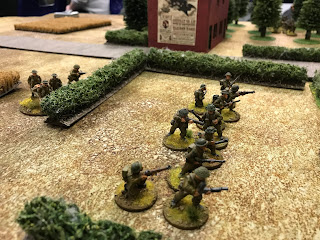 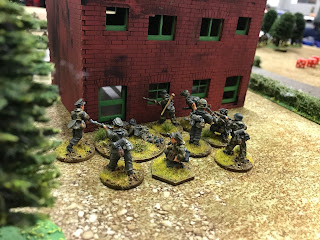 The game kicked off and I got two squads into firing positions on the houses, Dave occupied one on the left flank, no one really managed to do any serious damage, soon the right flank house was entered and my troops here started to take casualties. I got sidetracked and started lobbing smoke in front of the left flank house with an idea to run up that side and outflank the Jerries, but in fact I should have been lobbing smoke in front of the more dangerous house, duh, the placement of the smoke was not brilliant either. I brought on my little tank and it popped away, again supporting the left flank. Dave now brought a third squad on to the table and again concentrated on my right, my boys were being cut to ribbons. I at last woke up and brought my third squad on and they dealt out quite a bit of punishment to the Jerries in the orchard but it was too late, in quick succession my leaders took three wounds which dropped my force morale to four, then the loss of the squad took me to one, it was game over. Before this a panzerschreck had jumped out and shot at the Stuart but had thankfully missed, this is a very dangerous weapon in CoC. 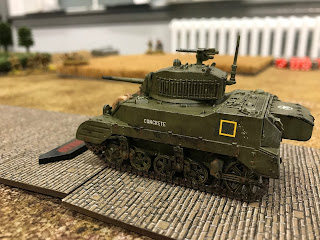 I really messed this up, I had thought and thought about attacking on the left and never did, I then kept a squad off on the right when I should have brought them on as support, a poor show and it was only on the drive home that I realised what I should have done but it was too late. I do however think that I might double the support points in these games otherwise I will never get to use all the lovely vehicles available for WWII, it is fine in the campaigns but the basic scenarios I think are too low. I think if playing at home I may try the larger 8x5 table to see how the extra room plays out. At the end of the day it was a good result for Dave in his first game and another learning experience for me.

The club as I said was busy, two very nice Sharpe Practice games, Age of Sigmar and an RPG game, I have signed up to a small X-Wing League which Andrew is going to run, not sure what is happening next week but the week after I will be back at sea as the Sea Wolf hunts down more French prizes with Black Seas. 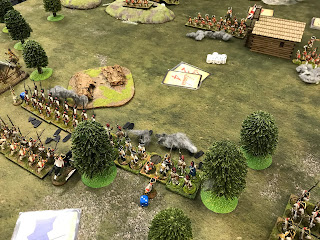 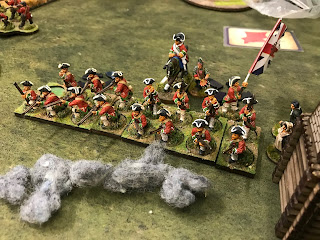 Posted by George Anderson at 09:06