After the 'Hedge of Death' episode morale in the British ranks had slipped somewhat, especially after driving unopposed through the German countryside collecting prisoners at every turn. Resistance was now stiffening as 1 Platoon supported once again with two Shermans approached a small hamlet having left 3 Platoon to lick their wounds around the Hedge Line. The Germans were once again prepared to defend the Reich, the remnants of once proud Waffen SS formations and a small team of Hitler Youth armed to the teeth with a couple of panzerfausts each were moving on the same hamlet.

At first the British were completely confident that this time their tanks would blow away the opposition, despite this not being the case over the previous 36 hours, once both sides had made their advances the British held one house on the outskirts while the Germans settled in to the remainder to await the onslaught. The approaches to the village proper were covered by barbed wire, but the British had a wire cutting team on standby. The tanks began to pummel the nearest German stronghold with impunity, I thought as the Jerries had no heavy anti-tank presence I could just about wrap the game up as it was turning out to be very bland. I contacted Matt and told him what was going on so he threw caution to the wind and ordered his men to be more aggressive. 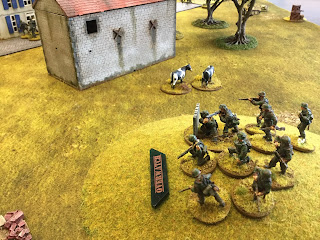 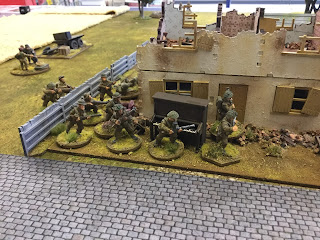 To this end I brought along the panzerschreck team and threw a die to determine which panzerfausts had been issued to the infantry, a 6 meant the best, panzerfaust 100's, so during the next German phase out popped the 'schreck team and the men in the first house opened up on the nearest Sherman, the 'fausts both missed as did the 'schreck. This however gave the British tankers a real fright, however they were too slow at moving back and in the next salvo the 'schreck brewed the closest Sherman, the other although shocked and the driver stunned managed to get out of panzerfaust range. The 'schreck team down to one man ran for cover and waited an opportunity to pop out and take another shot, this could be suicide as the British had now managed to bring on a section and move along the right flank and was waiting on overwatch for just such an occurrence. 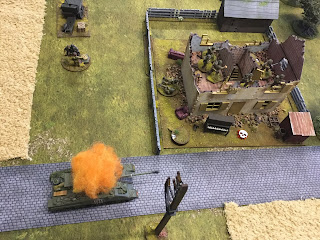 Things now began to go the right way for the British, a section was now sent to the left flank, in the spirit of Matt's orders the German section there had an idea to move out of their house to open up lines of sight but were caught short of cover and a complete team were shot to bits, the other remained in the house. In the house nearest the British both MG42 teams had been whittled down to a couple of men and looked ripe for an assault as the wire had now been breached and a British section were approaching the blind side of the house. There was no need as the remaining Sherman rained destruction on the inhabitants and wiped them out, this tank now turned its attention to the only full remaining German section in the barn. German morale fell, it was time to surrender. 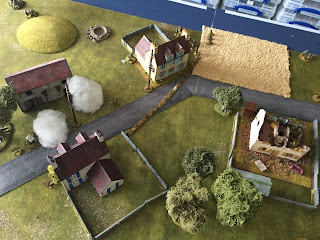 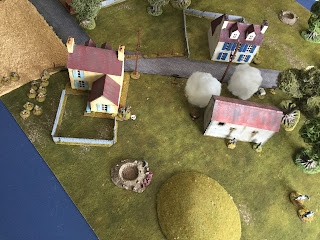 The main problem for the Germans in this game was that they had no heavy AT capability, this is of course at a premium for this campaign and to get some the Jerries need to hold the British off for a time, they managed this but sadly their replacements have been a bit on the light side so far. I of course use my own buildings and these were bereft of windows on the sides although had plenty back and front, this was not deliberate, it was just how they were put down, this played a bit of havoc with lines of sight for the Germans. The British also managed to get five free moves for the Patrol Phase, this also put the Jerries on the back foot as I think only one of their JOP's was in a really good position in the town centre almost and allowed easy flow into the barn and the opposite building, the barn did have good LOS.

There are three tables to go and the core of the German defence has either been defeated or surrendered, the British have lost almost half their armour and casualties have been heavy in two of the platoons. Intelliegence now suggests the British are up against the old men and young boys of the Volksturm, will they fight or will then fold, we will find out.

What else has been happening, well I finished my first Highland unit for the Seven Years War, the 87th Foot, Keith's Highlanders. The figures are from Perrys American War of Independence and are very nice and fit well with Front Rank, I have not gone overboard on the tartan and I have gone for the suggestion rather than a perfect set. They were military tartans back then so they were not fancy unlike the colourful stuff we get today where every man and their dog 'has their own'. These guys had a dark green set and the 88th which will be on the tray soon have dark blue/green. 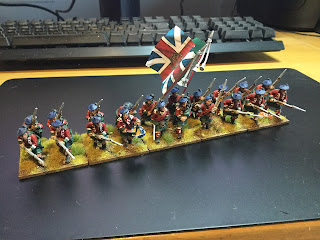 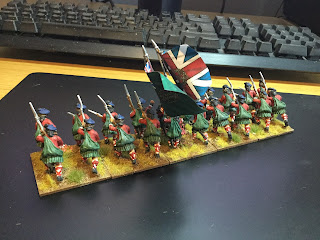 My wargamers OCD kicked in again, for the Bremen campaign one of the choices for the Germans is a Pak 36 with steil granate, so I bought one from Rubicon, it will not only do for the campaign but for other games during the fall of the Reich when local forces and garrison troops have to be thrown in to the defence. A recent book also showed Panzer II's and other early tanks including French machines being used as the Russians closed in. I got the gun yesterday and in three hours it had been built and primed, today I got started before opening the PO and I can see it being done and dusted for the next game some time over the weekend. 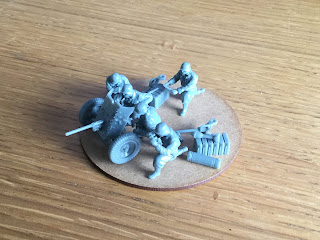 I nearly forgot that I made another visit to Duncan's emporium on the Crag, I had some books to take back and he asked me if I would like to take a spin in one of his Kubelwagens, I tried to be nonchalant as if I drove in WWII vehicles every day but it didn't work, yes please. We set off on a small journey along the Crag road and got some very odd looks as we turned around in the little car park and sped away again, well I say sped, drove off again. It was a real treat, the car has nothing fancy in it at all, completely basic and a button start would you believe, I was glad no one would be shooting at us as the petrol tank was right in front of me where a dashboard should normally be. I dragged out his panzerschreck for a closer look and wandered around a bit while Duncan got us a cold drink, we then sat and chatted for an hour or so before I returned with a huge smile on my face to Casa Anderson. 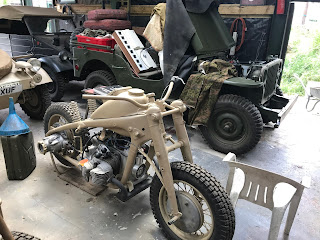 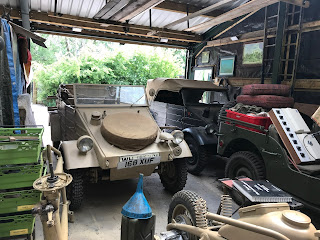 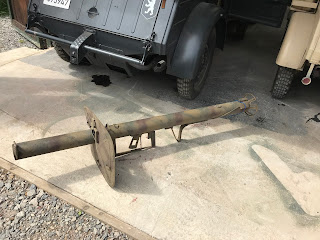 The lockdown continues to be a pain as does the madness in the outside world, thank the lord I live in a village off the beaten track and a great distance from London.
Posted by George Anderson at 17:25