We didn't get to fight a boardgame this week as I had to concentrate on some map projects which were priority but we did manage a Bolt Action game yesterday to have a break from our sword and sandal epics.

I have been busy so I dug out a Bolt Action scenario book I have (D-Day to Berlin) but have never used and decided to play Hold the Hill, loosely based on some Polish troops holding a hill would you believe. I also decided not to fill the table with buildings and roads, so I put down a rural battlefield with one ruined house, the hill and lots of hedgerows, not bocage. Both sides had four squads, some support weapons and two tanks along with a vehicle for the commanders. Each player got points for destroying an enemy unit and having troops on the hill at the end of turn six. 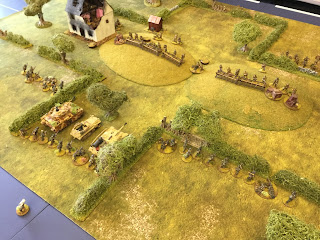 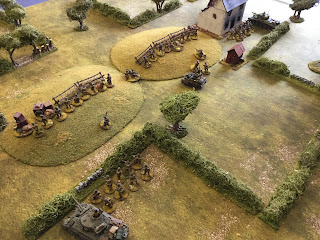 Kevin took the Germans and my 'Poles' were hit by a preparatory bombardment at the beginning, this caused a lot of pins, a few kills and destroyed my command vehicle, a bren gun carrier. The Germans then came on quite aggressively and aimed straight at the hill, one squad tried to manoeuvre against my left flank. I simply held the line and kept my tanks back for the first few moves while I sent my reserve squad towards the outflankers. Kevin continued to push forward with his StuG and PzIV, obviously with the idea to sending them against my tanks which were at opposite ends of the line, I did warn him a PIAT team were in the area but the he was sure it was no threat having read it was pretty useless. 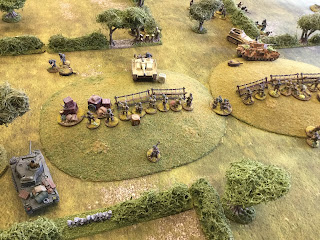 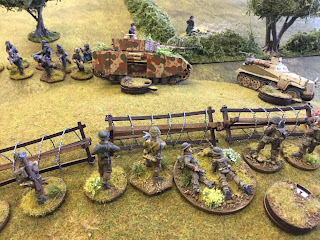 I threw the PIAT team forward for a shot at close range into the PzIV's side armour, bang, a hit, sadly the monster did not blow up, it merely ground to a halt throwing a track, which now effectively gave the Germans a pillbox on the hill. The PIAT team were immediately picked on and killed, so they had no chance to finish the tank off. I was now thinking of bringing my Cromwell over to hit it in the flank. I kept my Sherman back to help my reserve squad stop Kevin's flanking move but they got the drop on me and sent them packing, the Sherman was shooting at them and a squad to the front, I was also wary of not being flanked by the StuG. The StuG however roared over the hasty defences on the hill and into my rear area where it took out my mortar, which had not been of any use throughout the battle due to my bad positioning of both it and the observer. As the end approached I tried a couple of shots at the StuG with the Cromwell which all bounced off as did a return shot from the assault gun. My Sherman I now brought on to the hill and loosed a shot at the rear of the PzIV, missed! This gave Kevin's outflankers an opportunity to fire a panzerfaust at the Sherman, sure enough it hit the rear and started a fire, down but not out thankfully. 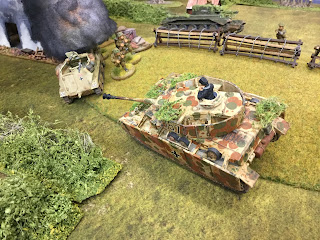 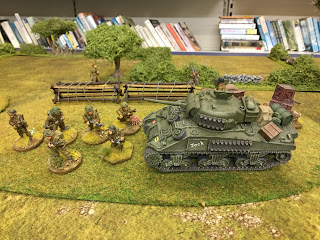 We counted the scores on the doors and I scrapped through with three points ahead, much closer than the beginning of the game promised. One thing which gave me an advantage was that Kevin threw 'Fubar' (two sixes) three times, twice this caused squads to run to the rear but the third time it resulted in his own command unit being decimated by friendly fire from the immobilised Panzer!  This turned out to be a very good game, exciting and hard fought.
Posted by George Anderson at 09:53