This afternoon we played Holdfast: Eastern Front at Kevin's, we played the first scenario which meant the Germans had to capture two of the following cities; Moscow, Leningrad or Stalingrad. I took the Russians and Kevin the Germans.

To capture two of these cities the Germans have to burst through the Soviet defences fairly quickly and open out into the rear areas while the Russian player has to try and maintain some kind of front rather than simply be a speed bump. Kevin burst across the border and concentrated on trying to grab Leningrad with Army Group North, I lost several armies in the border battles but could reconstitute them and bring them back as replacements, albeit with diminished capabilities. The German centre and southern groups made only tentative probes against me, while I threw my replacements and reinforcements in the path of AG North, the railway rule was a great help with these movements. 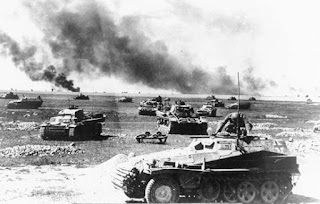 Kevin saw a chance and took it, 4th Panzer Army raced ahead for Leningrad only to have weak but effective Soviet armies cut it off from its supply lines, Stalingrad had come early to this war, I was sure I could hear the screams from the Wolfschanze in East Prussia. At the same time General Winter closed in and the Germans found it very difficult to coordinate their advances while the weather halted the Luftwaffe. Needless to say this was a boon to the defenders.

As the northern attack became bogged down AG South and AG Centre began their operations, the former taking a long time to capture Odessa while the latter was slowed by the Pripet Marshes. I managed a small counterattack in the south which also helped slow down AG South. As the summer of 1942 passed, new, full strength Russian armies began to appear and were used to strengthen the line. With the onset of Winter again about to hit the combatants it became clear the Germans could not succeed in their mission, Uncle Joe gave a sigh of relief. 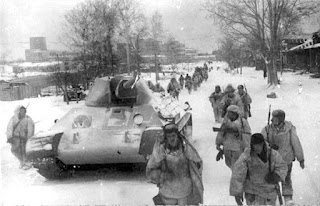 We got a lot of things wrong during the game but it did come across as quite exciting and although relatively simple, or so we were told, it was again very clever in its mechanics, I especially liked the weather and the way it affected both sides differently. This would be a very good game for a club night, I was impressed and look forward to taking the Germans next week.

I have completed another unit for the Seleucids, this time they are Thureophoroi, a nice light but well armed unit which can operate on the flanks of the army and hopefully protect the phalanx, and if required take the fight to the enemy. I am now working on my Galatian warband, I think these will look good, the shield transfers are especially lovely. 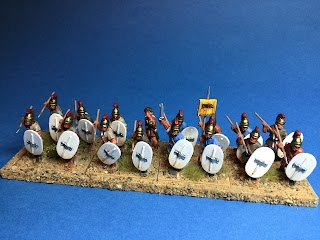 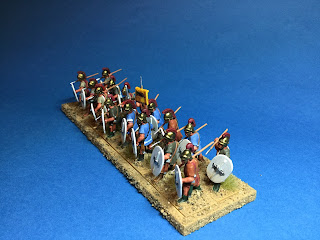 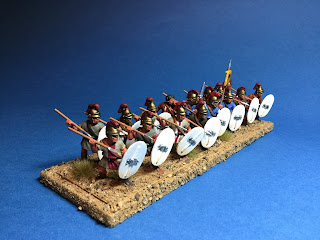 Posted by George Anderson at 21:13