The Spider is Back!

Dead Man's Hand last night and as usual I had no time to prepare a scenario so asked for someone else to do the work, Julian and Ryan between them brought one to the table. The town was full of people, as it would be, but hiding among them were criminals, so each of us had to confront a civvy and a die roll decided whether they were bad or good, if the former they fought back and if the latter they had to be escorted to a safe place. At the end of the game you got to throw a D6 for each person you had 'rescued' or captured and that was your score for the game, if it was a high falutin' character you got to throw two dice. It was different. 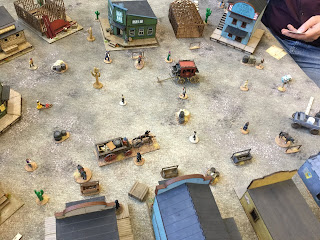 We were introducing Mike, who has never played a wargame in his life and is building up Victrix Napoleonics, Victrix is based in Kendal and Mike lives in Kendal hence his choice, I mentioned that he could get Black Powder rules for free from Warlord and it would be worth having a look at them.

I took 'El Arana' and his less than terrifying gang despite them letting me down time after time, I think he got the name from a Cornflakes packet. Anyway as we all set our sights on the nearest civilians it was clear that the Mexicans did not have as many choices as the other gangs, Julian and Simon seemed to be picking up most of them. I decided therefore to foil Julian and sent my companeros to pick a fight. Mike the newcomer confronted a figure in the square (with his hands tied, a hanging victim press ganged into use as a civvy) only for this superman to head butt his man to death, a hard intro to the joys of skirmish gaming, it did give us a laugh though.

The Spider threw his men at Julian while maintaining command from a safe distance, maybe this is where I had been going wrong, usually he led from the front. Fat Pedro chased a wounded guy into a nearby saloon, kicking the door down and firing off two barrels at point blank from his shotgun only for the lead to hit the ceiling, his mate Skinny Luis did the same outside, there was something wrong with our shotguns today.

With all the civilians accounted for, apart from the head butter who had floored another of Mike's men, we realised that with all the targets in custody there was no incentive to fight the other gangs, my Mexicans aside who were simply out for kills, so that needs looking at. Lead now flew as the square turned into a free for all as time ticked away. The Spider even managed a kill as he finished off one of Ryan's men lying wounded in the street, 'El Arana' was back! 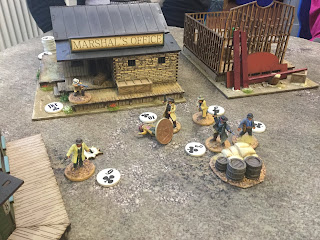 So there we go, we had a great laugh with insults being thrown back and forth, my Mexicans being the butt of several, highlights were Mike's fights with the guy with two hands tied behind his back and my useless shotguns, despite my aggressive tactics I still had four men left at the end. Oh, and who won, well I didn't only having 'rescued' two civvies, I am unsure who won in the end, Julian, Simon and Mike all had a bunch of people in tow, but I felt vindicated, more Mexicans coming at some point.
Posted by George Anderson at 09:38