The 5th Muster In

I have managed at last to complete my second British battalion for my Seven Years War project, next up will be my second French battalion but before then I am going back to Ancients, something my Wargamers OCD would not allow even a year ago. As I have mentioned the SYW is a long term project and I am deliberately not pushing ahead as all that will happen is I will start something else and I really don't need that. The new battalion is the 5th of Foot with nice lime green facings so they will stand out from the crowd, they have a piece of lace on their lower arm which is different to normal and I have painted my interpretation on top of what was modelled on the arm. I should in hindsight have sheared this off then painted it but it only occurred to me after I had painted the coats. Lesson learned. I think the next battalion will be the Gardes Lorraine. 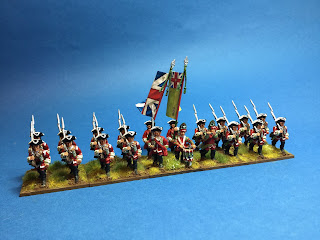 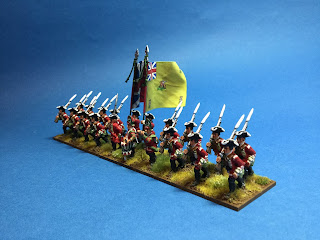 I decided after all to get a unit of line cataphracts from Aventine and add them to the Seleucids. They turned up within 48 hours, great work, I noticed they are also now mounted on the new sized horses. Aventine used to get moans about the size of their horses, personally I had no problems with them, yes a tad smaller than some manufacturers but in all fairness GB and Victrix horses for example are probably on the large side. Anyway, these are bang on. I got the unit deal, six back rank and six in the front with kontos lowered, I gave my officer a sword, this gives him a more dramatic look. You can also see some extra officers for the Thunderbolts in the picture, a Tribune and a Centurion for when I get that new cohort. Yes, that is also the latest addition to my dice collection, my new Seleucid dice, out with the old and in with the new. 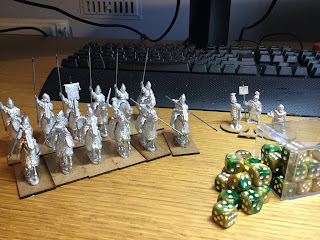 While looking for something to read some time ago I noticed an Ian Ross book in the background of a photograph of some soldiers my friend Gary had sent, I got one to test the water, I have not looked back since. I managed to get them all for a pittance as they had been out for some time, the last, "Mask of Command" almost had me turning to the end to see what happened it was that good. I have now ordered up the latest and expect it next week. I highly recommend these novels. 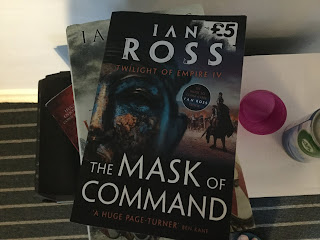 Posted by George Anderson at 12:01