I have now completed the first of my extra units which I 'need' for my Roman armies, the unit joining the Western Field Army are the Celtae Seniores, this unit is attached to the Italian Command of the Magister Peditum, the infantry commander, its sister unit the Celtae Iunories served under the Comes Africa and had a completely different shield pattern.

The sharp eyed among you may have noticed I have removed the Chi-Rho Christian symbol which the transfers have straight from Little Big Man Studios. The main source for late Roman shield patterns is of course the Notitia Dignitatum which to my knowledge does not show this symbol on shields at all. I also read that it was only ever used once, when Constantine had his troops daub it on their shields at the Battle of the Milvian Bridge, an early example of psychological warfare/Christian propaganda? So I painted it out. This Auxilia Palatina formation was normally 'brigaded' or found with the Petulantes Seniores who have a yellow shield with a blue figure which is also available from LBMS 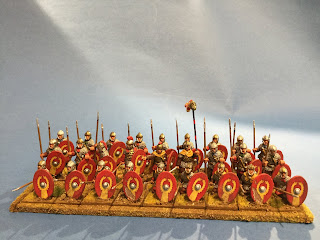 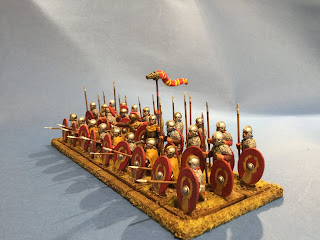 The unit as its name suggests was originally recruited from Celts, so stationed somewhere on the frontier in Gaul perhaps, like many Roman units it may not have kept this ethnic mix due to moving around the Empire and having to recruit locally, but they did like their history and origins as befits veteran units, so no doubt some Pannonian joining would become an honorary Celt.

The painting tray is full for the moment with the Seleucid Companions then the SYW artillery pieces, it is then a toss up whether to keep going with SYW infantry and cavalry or take a break again and get that last unit I 'need' for the Twelfth.
Posted by George Anderson at 10:55