Time put to good use.

As you know I received my new Bolt Action vehicles on Monday afternoon, my enthusiasm got the better of me and I built them up almost right away, the German stuff first, I had them primed by Tuesday morning and the Stuart built in between customers by Tuesday night. I put my French cavalry to the side. It was my day off on Wednesday so I primed the Stuart and got stuck in to both German vehicles.

I have a set of German tank colours for WWII but I found out too late that they really work best in an airgun, they can be used with a brush but they are rather thin. So I have fallen back on Vallejo Model Colours, German Yellow for the main colour then Russian Green, to this can be added any decent reddish brown colour for the third element, I used Cavalry Brown. A while ago I looked at getting an airgun but cost put me off, you can get cheap versions but that would not have done for me.

A quick google will show you how diverse German camouflage was in the latter half of the war, the shade of colours can differ as well, the method of applying them was usually left to the units in the field, so they could be sprayed, brushed or even applied with wet rags. I like to show diversity so all my vehicles have different examples of camouflage schemes. The Puma was based on a real one in Normandy, it is simply green lines over the yellow base coat, I then gave it a wash with Army Painter Soft Tone. After this I used a piece of sponge dipped in black to weather the edges, once all this was finished the vehicle was given a very light drybrush with Dark Sand. At this stage I usually apply MIG Europe dry Mud to the tracks, wheels and lower extremities, but I have not done this with these two models, I may yet do this at some point. Now I add crew and stowage before giving the whole thing a spray of Tamiya matt varnish. I forgot to mention I put on the decals before the AP wash, I have had a lot of difficulty in the past with this but the use of Micro-Sol and fine tweezers has turned me into a proficient decaler(?). 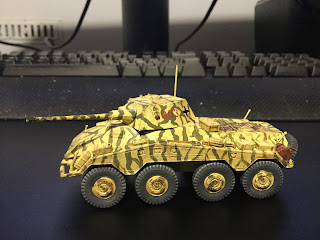 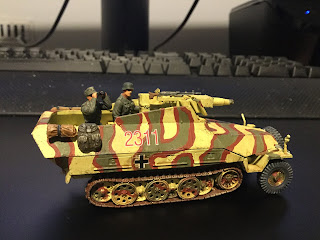 I chose to use a variation of the three colours for the Stummel in a pattern which I have seen before. I would have liked more stowage hanging from the sides and will add more when I get it, probably at Vapnartak in February. I was going to order it online but the firm was going to charge me £3.99 for postage, which, as a Subpostmaster I knew was daylight robbery.

So, what does that leave for my German Army now, obviously a Tiger I at some point although I am leaning towards the cheap anti-tank hybrids which on the table top pack almost as much of a punch, albeit without the Tigers survivability. Like wargamers who need Romans, Germans need a Tiger. To balance this my British will get a Firefly. At some point in the future I would like to get some trucks, jeeps, cars etc. but these are not imperative.

I was going to start on the Stuart today but have instead decided to be lazy as I am heading south tomorrow or will be if our dilapidated railway system can take me, driving is now only a last resort for me. I will be in the town on Saturday with my sons and then heading to the Indigo at the O2 to see the Dualers, I may even have a real drink.
Posted by George Anderson at 16:57