Game against Rob, the author of War and Conquest.

I put the Eastern Front aside last week and sorted out a game with War and Conquest author Rob Broom, Rob was keen after reading the last report when Matt Smith took control of the Romans, this time I would put all my efforts into commanding the Twelfth and send maps and photographs so that Rob could take as much control as possible.
I formed up with the bulk of my cavalry on my right, then two bolt shooters on a hill, this being the only height in my deployment area and these machines were hopefully going to bring down the elephants when they turned up. Next came the main line of the Legion in the center and on my left were the auxiliary troops, archers, infantry and cavalry. Opposite Rob had placed the elephants and Phalanxes on the left along with the Companions, his right consisted of lighter troops, Theurophoroi, Thracians, scythed chariots, skirmishers, horse archers and some medium cavalry. When I saw this I checked my points as I seemed to have a lot more than Rob, they turned out fine I also checked his as I was sure he had some left, but again the numbers were correct. On reflection Rob had paid a lot for his pikemen, Companions and command, the lighter troops don't come cheap either. I on the other hand only paid for two normal cohorts and two with recruits, I am cheap OK. 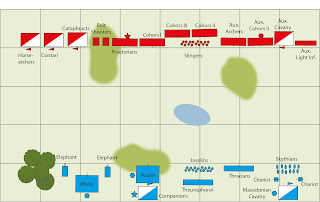 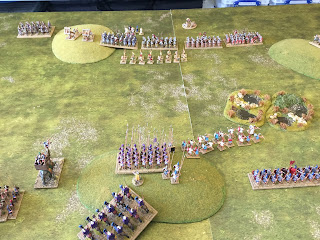 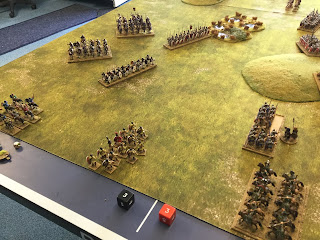 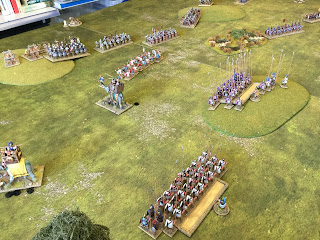 My plan was to kill the elephants as quickly as possible and luckily my bolt shooters were in a perfect position to shoot at them, I also moved the horse archers and the slingers in to take shots as well, the Auxiliary troops would advance with the possible aid of Cohors II and destroy the Seleucid right then the Legion would advance and finish the job. 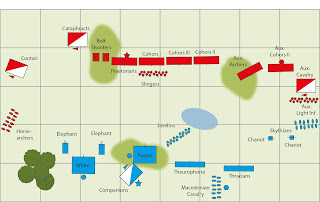 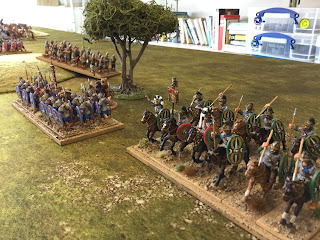 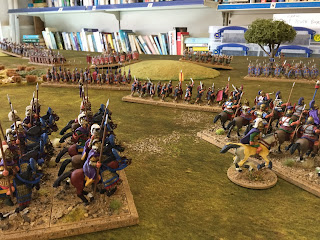 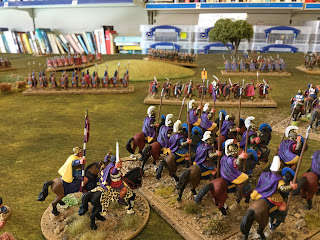 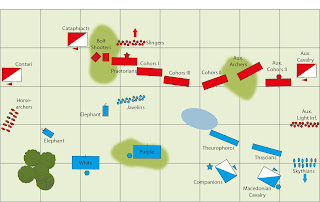 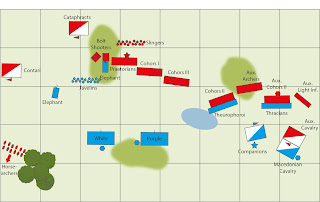 The first Roman volleys yielded no casualties at all which surprised me, the Seleucids did not have a lot to retaliate with and both armies got on with manouvering. Rob wanted his elephants and chariots to move to contact as fast as they could, despite this the elephants could only lumber on at a snails pace and this time they began to take hits, one looked like it would not make it to the Roman line so I turned it towards the Roman cavalry to force morale checks (I had to take some decisions for the enemy). One chariot fell to massed archery but the other hit Auxiliary Cohors II and caused a fistful of damage before succumbing. Nevertheless the Lanciari (Aux. Light Infantry) routed the Skythian horse archers so honours were even. Now Rob turned his cavalry back to his right and moved his light troops forward with the intention of taking on the Roman left. Cohors II peeled off to threaten this move. 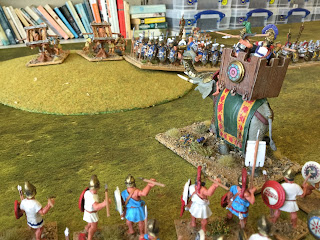 I had moved the Contari back from fear of the Elephant but then decided as it turned back into the centre towards the Cataphracts to move them forward again and chance their morale. The second Elephant had got into charge reach of one of the Bolt Shooters and decided to go for it, the artillerymen held their nerves and the elephant took several hits as it came in, in a surprise outcome the artillerymen held and actually won the combat, the second round would result in a draw and the elephant near death. The White phalanx cautiously edged forward. On the Roman left the crises had arrived and the Seleucids threw all their troops at the Roman Auxiliaries and Cohors II, despite being lighter than the Auxiliaries the Greeks at first did quite well, but as the combats continued the heavier Roman troops routed the Theurophoroi and Thracians, the Macedonian light cavalry also lost their edge in the second round. The Companions now found themselves the sole targets of the massed archers on the hill and men and horses began to fall. I called a halt here and as I looked over the battlefield I felt the Legate of the Twelfth was on his way to a Triumph. 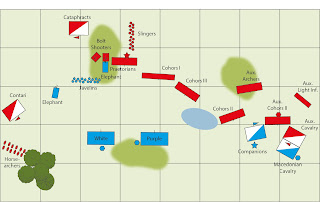 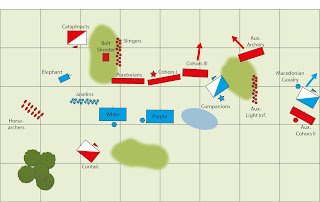 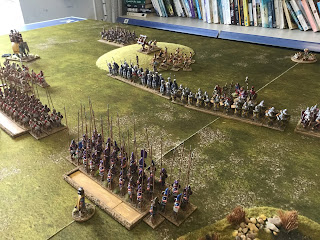 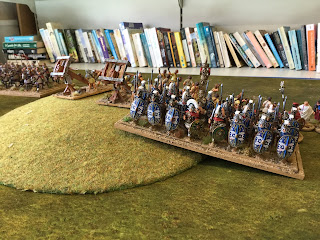 Being a bank holiday I got up early and returned to the fray, I had it in my mind that I would be packing things up after I had destroyed the remaining troops on the Seleucid right, how wrong that turned out to be. It started well and my Auxiliary Cohort hit the Macedonian light cavalry after they had routed my medium cavalry, the Companions now turned on Cohors II an easy victory thought I. Within so many blinks of an eye the Companions had ridden down Cohors II and nearby Cohors III and my Auxiliary archers had decided they would join the rout. The archers refused to rally for the rest of the game and the Seleucid cavalry now caught and dispersed Cohors III, almost all of my left flank was running or dispersed, and the Phalanxes were now advancing against my remaining two cohorts, I started to get a trifle nervous. On my right my artillerymen now managed to kill the elephant, I am glad it was not mine as it had been basically useless throughout the battle, I now sent my Contari on a wide flanking movement against the Greek left, would I have time to throw them into the battle before my legionaries fell to the phalanx. 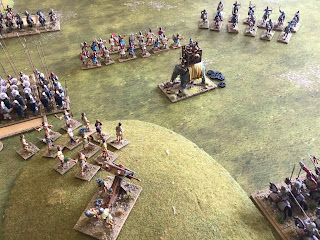 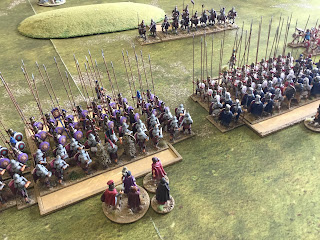 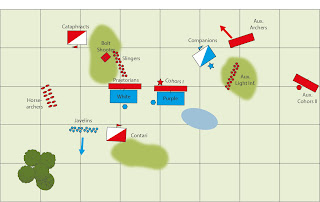 I managed to hit the phalanxes before they charged me, but my elation did not last long as they pushed my boys back and I furtively glanced for a white flag. The long suffering left flank elephant had lined up to take the Praetorians in the flank but a host of missile fire at last put it out of its misery, but my guys were still on the back foot, however their morale held as the bodies piled up, the Legate could see his Triumph disappearing. The Contari now rode in to rescue the Thunderbolts reputation and the legionaries found renewed strength, the White phalanx crumbled as the horsemen hit them in the rear and the Praetorians, under threat of decimation, made a superhuman effort and did their part to rout the Whites. Cohors I also rose to the occasion and caused enough casualties to reverse their fortunes and cause the Purple phalanx to fail its morale and rout. The day had been saved, "Remember you are mortal" as the Romans say. 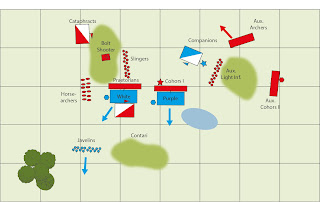 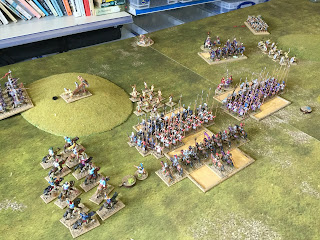 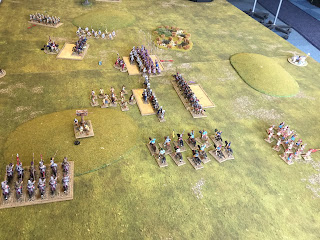 A lot more maps this time from the normal three as once I needed input from Rob I sent a map and photographs. A very enjoyable game for me and although there is always a problem of judging distance through maps and photographs I felt Rob was as good as standing across from me, almost. As the Seleucids closed to hand to hand combat their die rolls were unbelievably bad, don't tell me I need yet another set of dice, the amount of 1s and 2s turning up was depressing especially as some of the units only needed 3 and above to save or kill. I asked Rob why the phalanxes were not moving and he said he was looking out for their flanks. I think if he had advanced them with or close behind the elephants a bit earlier it might have been a different game, I also thought the use of the elephants a good tactic as they nullified my shock cavalry and I was at first a bit wary of them. As Cohors II had been pulled to my left flank the two large phalanxes I suspect could have given my Legion a very hard time.
So there you have it, an excellent game. Back to the Eastern Front next to finish the Konigsberg Campaign.
And now a few words from our Sponsor.
Hammer and Anvil
When George invited me to play against him remotely using War & Conquest and his Successor army I must say I was looking forward to the challenge. His Successor army has plenty of choices so I selected elephants and scythed chariots to disrupt his forces, pike blocks to act as an anvil and then Companions and experienced light cavalry to act as the hammer.
It became obviously early in the game that being a remote general really gives you more a feel for how helpless some of the ancient generals must have felt once the action started - you know what you want the troops to do - and you issue the orders - but at times they come up short :)
My plan had been to hold the cavalry back, show a bit of feint and then race the cavalry to strike at a suitable flank or weak spot. In this case it ended up being the Roman Auxiliary flank. As Georges excellent report, maps and photos will show, the best plans don’t always work out and apparently, ‘my’ dice rolling was very poor!
But come the end, the game ran close - the stewards enquiry on the dice is still out, and a rematch will be most welcome. My thanks to George for a superb bit of entertainment and I really would recommend you trying out this kind of game - it really gives a new twist and overview of ancient battles.

Posted by George Anderson at 15:00