During the breakout campaign the Soviets once past table three can mount a counterattack, I deliberated whether to do so as the later maps might prove more conducive to an assault but then decided no, it would be Seerappen. The map showed the ground to the west of the little station compound to be open but with a wood in the top corner, I did some checking online and found out there had been an airfield there, but where I was unsure. I settled on a farm complex of a few buildings west of the station and some trees.

The extra support for the attack had to be used on armour so I went all out for armour and took an SU122 and the mighty T34/85 which had proved so formidable at Metgethen, I went for the assault gun as I wanted to clear the buildings in my path which the Germans would naturally sit in. I also retired my initial squad due to high casualties and proceeded with a new platoon, this now has to last the Soviets for the rest of the game. Also in support I took an MMG and an HMG, again the latter was to help, hopefully, clear the buildings. Matt also had a new platoon, he had a choice of infantry or volksgrenadiers and chose the former, he also took a second panzerschreck and a StuG III.

Matt wanted to hold off until the Russians had shown their hand, despite this I brought on the StuG early and positioned it to command the center of the table, both sides now suffered from pre-game barrages and had a hard time getting troops on. As time passed the Russians ended the turn and with a couple of double phases rushed a squad up the left flank to take cover behind a stone wall, their armour turned up on the right and edged forward to get firing positions on the large yellow station house. I expected with the amount of firepower being sent into the building that it would be abandoned very quickly but yes, that did not happen, the Russian shooting was dismal and the forward squad began to suffer badly despite being behind the wall. 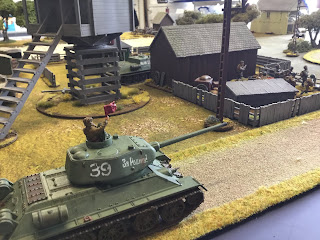 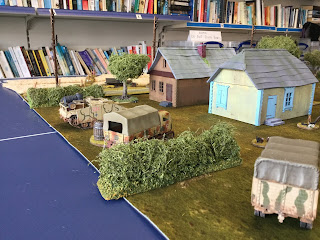 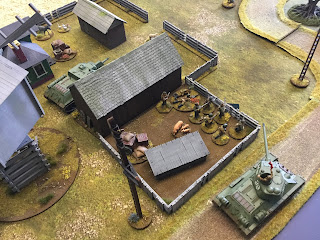 On my right I deployed the heavy squad and as the tanks crawled along the road I set the infantry off to advance further into German territory and perhaps capture a nearby JOP, despite the double phases they seemed to be running through treacle. The two panzerschrecks now deployed and fired at the SU122, both missed and suffered accordingly from the retaliation, both these teams broke for the rear. I now offered Matt the choice of withdrawing or moving the StuG to take on the Russian armour, the StuG edged forward, the SU122 took shock and retired, it managed during the next turn to hide from the German vehicle which now moved on the T34. Before the StuG could take a shot the T34 interrupted and convincingly knocked it out. This now left the German infantry with only panzerfausts to take out the Soviet armour, so they wisely decided to retire. 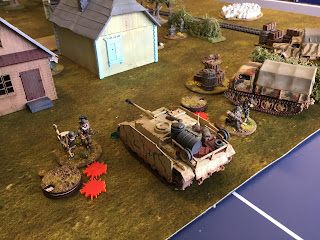 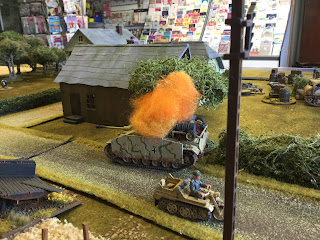 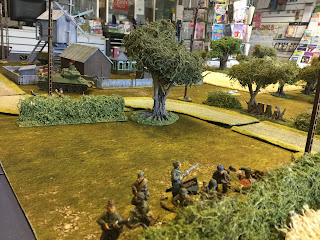 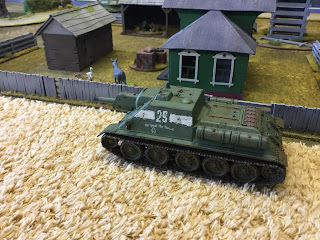 I think this counterattack along with the stubborn defence of Metgethen has put the kybosh on the breakout however as I have nothing better to do I may continue to see just how close the Germans can come, I may take pity if they win the next two games, a hard call but a fair call.

I have 99.9% finished my latest SYW unit, an Irish battalion (Rooth's) in the French service but can go no further as I have not received their flags yet, nor the flags for the next load of Irishmen (De Clare's) on the tray or the ones for the Highlanders on their way from Perry Miniatures, I do hope they turn up soon. 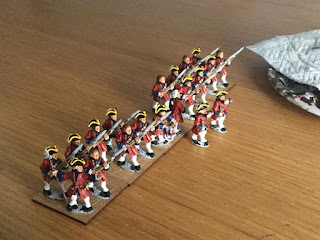 Rubicon were doing 25% off for VE day and I jumped and got a Kettenkrad, why, because it was cheap, I stopped myself just in time from getting a mortar carrier for the Jerries, you can't really use it in Chain of Command and it would be too expensive in Bolt Action, so commonsense won out, for now. The Goliath guided bomb had two pins to hold it in place but I could see these breaking very easily so glued the little tank to the carriage as if not it did not sit well, after all when would you see it on the table and supposedly it could not take a lot of damage. 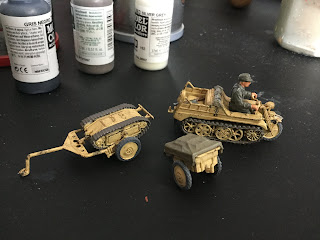 I posted some of my photographs from my visit to Duncan's place this week on Facebook, smiling and happy to be holding several pieces of history only to have my Rambo poses described as pandering to 'gun nuts' and therefore perhaps I was a gun nut. Two people who have no idea at all about me and obviously did not take in the blog post re deactivated weapons and that they were used as props for movies and television, nope I was a gun nut. The last time I fired a gun was around 1975 when defending the Empire and even then it was against a paper target, I did enjoy it but all that was left behind in 1979, my services no longer being required having fended off the Red Menace and the Yellow Peril, can I say that?

Posted by George Anderson at 19:15