Back in the mid 70's I went to one of my first wargaming shows, probably Claymore, at that time I was an SNP supporter when it was all a bit of fun and pie in the sky, unlike the fanatics in charge today. Nigel Tranter's Bruce trilogy was still a vivid memory and I had completed my first ever, proper army, Scots naturally. At this show I came upon a game by Fusilier games of Aberdeen and it cost £5, a princely sum back then for a game, but as it was called 'Robert the Bruce' and covered the Wars of Independence (although we were in fact independent) I dug deep and became a proud owner. 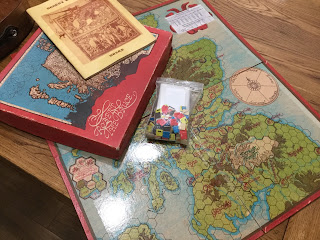 I enjoyed many games and like a proper wargamer I wanted to spruce it up, I always wanted to use 25mm knights rather than the counters but never got around to it, I did however make some nice coloured cards and laminated them. My one bugbear with the game was the map, many of the hexes could be argued over whether they were highland or lowland so I designed my own map, but never got around to actually printing it off, looking back it was a pretty amateur job which was best left alone.

I became aware years later of the game 'Hammer of the Scots' a nod to Eddie One and always fancied getting it but never did, every now and again the idea came up and again it disappeared as whatever I was doing at the time took priority. Due to technology the next time I looked I could actually see the game and watch how it was played, niggling away at me was the idea that this was simply 'Robert the Bruce' updated, I even checked up the designers and they are indeed different, but believe me the similarities are too many for it not to be a clone. 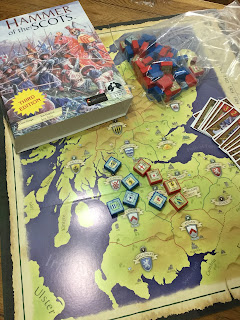 So the other day I bought it, the price had come down and I was tipped off that it was now £43, so I jumped at it. I had hoped to take it to the club this week but the one day I am expecting a parcel Parclefarce don't turn up until late afternoon so way too late to sort the rules out, and guess what, the next day 0910 bright and early!

I like the look of the game and the mechanics are better and more streamlined than RtB, it is a block game and will be the first I have ever played. But, yes there is always a but, there is a touch of Braveheart in it, RtB was completely historical with HotS there are French knights, nope, don't remember them during the Wars, they don't turn up until the Stewart's are on the throne so why they should be Scottish allies niggles me. In the original the Lord of the Isles was a Bruce supporter and MacDougall a Comyn supporter, both had fleets and were a great way to move forces around, the English had a fleet as well, in this version for some reason the only fleet in the area is Norse, seeing as the game starts around 1297 and the Norse had not been seen on the Scottish mainland since 1263 and signed a treaty in 1266 I do wonder who came up with this. I have one other small, but important to me complaint, James Douglas is represented by a generic saltire and not his coat of arms, that will be the first change and I have the technology and skills to do it, a saltire indeed for the Black Douglas. (When looking for 100 famous black Britons a few years back the Good Sir James (he was only the Black to his enemies) was mentioned, I wonder if they thought the Red Douglas's were native Americans?)

So already I am thinking of introducing the Isles, Macdougall and an English fleet without even having played the game, so I shall have to rein in my enthusiasm until I play a few rounds.

Oh, and you can keep your Balliol supporting William Wallace, "A Bruce, a Bruce!"

Posted by George Anderson at 20:05

Email ThisBlogThis!Share to TwitterShare to FacebookShare to Pinterest
Labels: Boardgames