Bits and Pieces and a big spend.

No Bolt Action at the club this week as poor Rob slipped, fell and got concussion so Simon and I fell back on Dead Man's Hand, initially there were three of us so I printed off my 'Unforgiven' inspired scenarios which work well with three players. No sooner had I done that than Julian had to call off, nonetheless I took them along.

We settled for the Lawmen led by Little Bill Dagget getting two cowboys to the local train station and on their way to Yuma or some such hellhole by 3 o'clock. For the first scenario I was the Law and we set out along one side of Main Street dragging the reluctant cowpokes with us, suddenly my men were under fire from their friends and biting the dust, I hardly made it past the first building, and the couple of deputies I was left with were never going to make the station. Simon's shooting was exceptional and he hardly missed, not only that most of his hits resulted in the instant death of one of my guys, it was all over in about an hour. 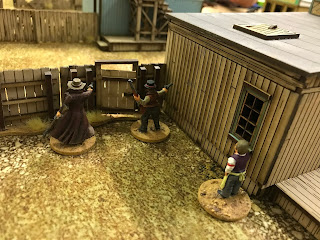 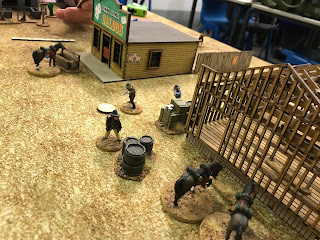 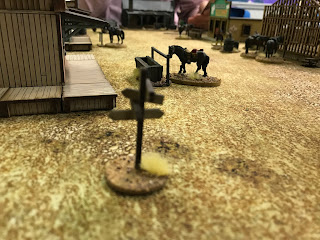 We changed sides as we had plenty of time left, once again the Cowboys managed to stop the lawmen at the edge of Main Street, I thought this was going to be another swift game, but my cowboys suddenly found their edge and as the bell tolled we were even on losses and the game was undecided with Simon's lawmen with a possible slight edge, but the station was still some distance away and we had not heard a train whistle. I didn't take a lot of pictures as I was too concentrated on the game.

I have now built the Boulangerie for my WWII terrain and have begun to paint it up, a fine big building, it now awaits roof tiles and weathering, I have decided to put the tiles on last this time as I think it makes more sense. I have also received my Norman church at last, but I am not sure whether I will paint the new Patrician Legion before building this or just going ahead once the Boulangerie is done. I also received some bits and pieces for my shelled buildings and will probably rebase these as well as there is one which just doesn't look right and it annoys me. I am still looking for that piano which is always present in bombed out buildings in movies. The SYW project should be back on the cards by the end of October. 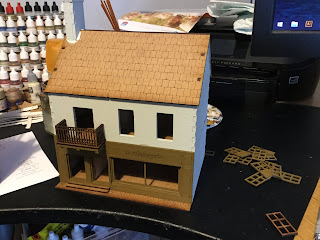 Map work has been hectic over the past few weeks and I have several projects awaiting the nod from authors to clear the decks. The Atlas of the American War of Independence has been given the go ahead and I have Bunker Hill to work on and get a template of colours and graphics sorted before I receive the beginnings of the other 179 maps. All this while continuing to work on other projects, but it is good to have a diversion now and again when doing a lot of the same thing, I have Vietnam, Ceylon and the Western Front waiting or near completion.

I have decided to give myself an early Christmas present, I lost out last year on a mistake by Curry's who wrongly sold the Wacom Cintiq HD22 drawing tablet for £999 and by the time I agonised over it they had taken it off the market, real price £1500 or thereabouts. I promised myself that a year later I would get one as hopefully it would be down in price, no, Wacom tablets do not come down in price unless you buy refurbished. My delay has paid off as this morning after watching reviews until almost midnight last night I ordered up the Wacom Cintiq Pro16, a smaller screen but more portable and it has touch screen abilities as well. Do I need it, will it improve my maps, maybe, but at some point if I ever get the time I want to get into actual art on one of these and this one is highly recommended. This machine has 8129 different pressure levels, how can you resist that?