Sunday dawned, and fortified with a heart attack inducing, totally non healthy, but delicious breakfast Stewart and I set up for the second game of the weekend, a War and Conquest clash between his Carolingians and my Saxon Heptarchy.

I had gone for a complete infantry army apart from a small unit of Duguth cavalry which I decided would spend the game skirmishing, I had my King's hearthguard and companions in two units, the White Horses, and then the rest were normal Saxon troops, a mish mash of average and poor commands. I had once again brought the Frank Mercenaries as they have been fighting well recently and I never learn. Stewart had a good strong line with some poor troops at the end and two units of heavy cavalry, two of the infantry blocks were elite Milites, he also had a bunch of massed archers. 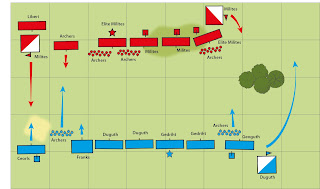 We both decided to have a fairly fairly clear battlefield so kept the obstructions to a minimum, Stewart did get a hill which he was pleased about. I offered to set up first as he had set up first the last time we played, once I had deployed with my best troops on my right the Carolingians set themselves up in a combined mass on the left of the battlefield, looking quite happy to sit on their hill. I decided quite quickly that I was not going to attack up the hill and held back, I did slowly advance my left as I saw an opportunity of perhaps knocking out a couple of the units opposite. As the turns passed Stewart pushed his army forward and came off the hill, the Saxon trumpets sounded and my right advanced to meet him. 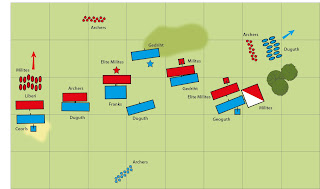 On the left my Franks found themselves under pressure from the massed archers to their front, they were going to lose their edge and never get a chance for revenge, I had a unit extra so left them behind and pulled Saxons in front of them. My Ceorls kept charging the enemy cavalry to their front but they in turn kept fleeing only to come back, but the Ceorls slowly edged forward. My Gedriht only had normal Milites in front of them, not the elite units with the Duke and Count, so despite the enemy being in shieldwall I threw them into battle hoping my elite status would quickly turn the tide. The King's companions destroyed their foes but the second unit dragged it's feet and although winning was having a hard time routing the enemy, I had planned for a quick assault and victory.


The right flank was a battle on its own and my one decent infantry unit there was taken out by elite Milites and one of the cavalry units, but the battle was going to be decided in the centre and left. I had managed to get the Franks out of sight of the archers and planned to hit the second elite Milites in the flank as it bore down on some Duguth, but they had other ideas and rushed headlong at the Milites leaving the Duguth wondering what was going on. Although the madmen hung on for longer than I would have given them credit for things suddenly changed for the worse, the Franks ran and took the Duguth with them, at the same time my winning Gedriht took horrendous casualties and were put on the back foot by Milites that they should have destroyed, on the right my cavalry routed as did that one unit of infantry over there. I looked around for a towel, another turn like that and I would have to throw it in, shortly before it had looked like it was all over for the Carolingians.

It was now Lady Luck deserted Stewart, in the next turn his archers routed and took his Liberi and right flank cavalry with them, my Gedriht at last routed their opponents, not a moment too soon as his victorious Milites from his left moved to join the fight in the centre, the Gedriht pursuit took them out of harms way. The enemy who ran the Franks down now fled from a charge into their rear from the Saxon King, in a last gasp the remaining enemy cavalry tried a desperate charge into a Saxon infantry block but failed to make a dent. A quick look over the field and it was obvious the Saxons were on the cusp of victory.

A very good game and a typical Dark Age set to, with these armies the dice can have the last laugh as the forces are usually fairly equal, you cannot afford to make a mistake with your tactics but if the dice are not at least average then there is nothing you can do. An example is the fight between my Gedriht and the average Milites, I should have won easily but it turned into a struggle, then one good run of the dice and I nearly lost, my men held but both units fought nearly to the last man and were no use to anyone after it was over. I also thought I had comfortably won half way through only to find a moment later looking as if I would lose then in the next turn grabbing certain victory. It has been several months since these armies last entered into battle and I think we were both a bit rusty, not a lot but enough to make the odd daft mistake, I know I did on my right flank.

Posted by George Anderson at 23:21