Once again it was a horrible, cold, wet night to journey into Lancaster, always seems to be the case on Club night. Last night it was Bolt Action, Rob umpired and the scenario was loosely based on something which happened in Band of Brothers, although the actors had a lot more success than we did. 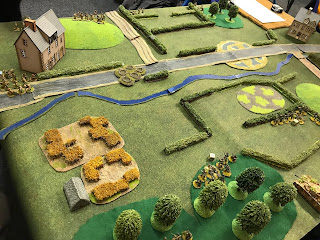 I was one of the German players, I had two infantry squads and a PzIV, Ian on the right had a Marder III, Puma, mortar, panzerschrek and one squad, opposite we had two well supported, large American paratrooper squads with a Stuart and two Shermans, we had to hold our ground and push the enemy from theirs. At first sight I thought I would be able to sweep away the Yankee right with the support of my tank, this turned out to be impossible as I couldn't hit a barn door throughout the game. I managed to get a StuGIII on to the field as well and it may as well have stayed at home for all the good it did. I was so frustrated that I halted my intended assault and simply held my ground, hoping against hope that my luck would change. The Shermans were taking long range pot shots at the PzIV, the crew turned on them and up went one of the Shermans, this was my only success in the game. 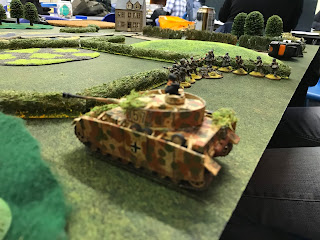 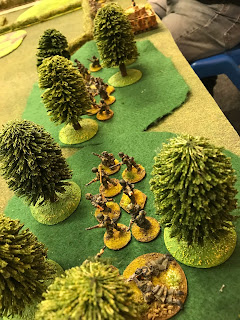 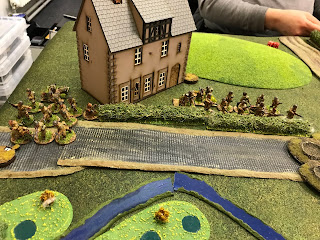 In Bolt Action there is a rule that if the enemy can see your tank they think it is a Tiger, it is called "Tiger Fear" and means they have to  take a command test before doing anything, this played havoc with the Americans, especially Simon opposite me as they failed test after test, Lady Luck had deserted both of us.

On the other flank the Germans seemed mesmerised by a piece of bocage and merely hunkered down behind it, this meant the Marder took no part in the ensuing battle, I urged that it should have sat on a nearby hill where it could have controlled the battlefield but that didn't happen. It also didn't help that any German troops which went into a small wood on that side of the table were invariably massacred, which didn't help the demeanor of their commander. I needed a mortar to shift some particularly troublesome bazooka teams but it was on the right and its observer was dead. 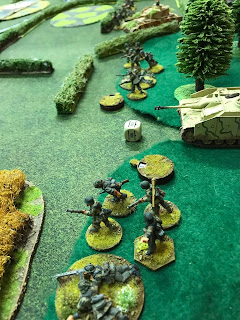 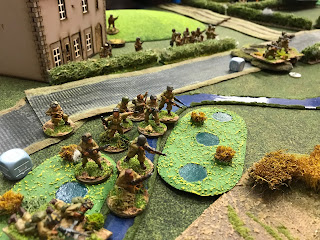 Just as the clock ticked down I lost the PzIV but it was too late to help the Yanks, the game stuttered to a draw, for a four man game it had went along quite well and we learned a few things about the rules. We all had dreadful dice luck, German casualties in the game were about three teams and five infantrymen while I think I dealt out three, Ian managed to knock out a few but overall it was dire. I don't think the new Down rule helped, if your target goes down, it is long range and they are behind cover it is a hard job to kill them. I wasn't chuffed that the Yanks do not get a penalty for moving and shooting and Simon was more than peeved at "Tiger Fear", I have no idea about the former but I have read some interesting battle reports where British troops cried 'Tiger!' when all the offending vehicles were StuG's in the winter of 44/45.

I am back to painting and am well on with the 51st I think they may be at the varnishing stage by the weekend, I have three battalions in the drawer awaiting attention but what with a holiday coming up in March it could be after Easter before these are all complete.

I am off to Vapnartak at York on Sunday, this is the one show I do like to go to, anything else is just a bonus. I only have a very small list and wait to be inspired by something to spend my £5 on.
Posted by George Anderson at 08:12