Very cold this morning but no snow, yes plenty on the hills but none falling on the righteous, fortified by a black pudding sandwich and a cup of Rosy I set off to pick up Simon and head into the badlands of Yorkshire.

It was going to be a busy day, there was still a queue to get in at 1020, and it looked busy, wargamers of all shapes and sizes thronged the halls, I think it was busier than last year, there were quite a few youngsters and wives and girlfriends in attendance, the latter especially, I even saw one woman playing a game of Bolt Action! The traders were really crammed in this year and there were many traffic jams as people tried to see what was on offer and therefore blocked the small aisles, while their mates/girlfriends etc. stood at their shoulders causing even more mayhem. The venue is large but perhaps it has outgrown itself.

I think Vapnartak is now simply a traders exhibition, it could only loosely be described as a Wargames Show of the old mold. There were several very beautiful, large, game exhibits and a number of small participation games, overwhelmingly skirmish types. On one table nothing happened, it was gorgeous but for me pointless not only that, not one person was talking to people as they stopped to view. The messy but interesting Bolt Action game was the same, I had to interrupt play in order to ascertain the supplier of the very nice British figures. The large WWI Mesopotamia/Palestine type game in one corner was again superb but not once did I see the players talk to the public, only amongst themselves, what's the point, look at us we have a beautiful game you can only dream of, so what.

I know a lot of effort went into showing these games and maybe I am being too harsh but part of the experience of a wargame show surely is to interact with the people showing off their wares, talk to like minded folk not be ignored as you try and work out what is happening.

I managed to pick up a few items, I resupplied myself with some paints, got a couple of nice trees from Last Valley, grass tufts and picked up a great deal on a Tiger I, which I had an idea of getting at some point but could not pass at such a price.

Unless I had something specific to get at York I may think of giving it a miss next year, a four hour winter round trip for a small haul could be a show too far for me. I realise I may be in a minority here but I go to wargame shows to see wargames, to be amazed, impressed and inspired, this part of the hobby is going the way of the dinosaur as far as wargame shows are concerned.

Rob and Stuart put on a Cruel Seas participation game, it was well supported and the lads spent a lot of time explaining the game and giving their opinions along with running several games which as far as I could see generated a lot of interest for the game. Well done.

I was supposed to have the 51st finished by tonight but because of the trip to York that won't happen now until possibly tomorrow night, I have the Royal Ecossais ready for priming, however with the arrival of the Tiger these may be postponed for a few days.

As you know I updated my X-Wing game to X-Wing 2.0 with Christmas gifts, I also decided to get a new set of templates and tokens, no, I don't need them, I just wanted them. I got them from Art of War and they are very nice, they cover all the factions in the Star Wars game and were far cheaper than getting them from the US which I was for a time contemplating, thankfully I came to my senses. 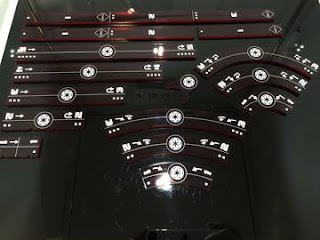 Posted by George Anderson at 19:49

Email ThisBlogThis!Share to TwitterShare to FacebookShare to Pinterest
Labels: Shows