The day before I went on holiday I received two trucks for my Bolt Action forces, an Opel Blitz and a CMP 15cwt, having returned I put my guilt aside re finishing the grenadiers on the tray and built them both on Thursday, primed and undercoated them yesterday and have now finished them today.

Both kits are Rubicon. The CMP is beautifully ugly, I just had to get one of these, I found the build fiddly, especially the box at the back, I am sure there is a technical term for it but to me it's a box, I also found the canvas supports a bit fiddly as well having decided not to put the canvas top on. My problems usually arise due to my lack of patience and perhaps someone else would find it easier. I base coated the vehicle in Russian Uniform and used Dark Rubber for the tyres, the whole was then given a watered down Army Painter Dark Tone wash and then a drybrush with the base colour plus a little white. 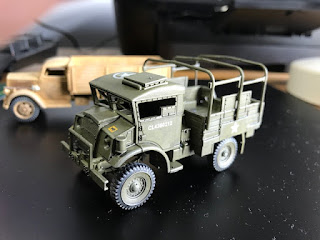 The Opel is a far superior model to the Warlord version and is an easy build, nothing fiddly about this one at all. Once again I decided not to put the canvas lid on, I should mention that both kits come with drivers, I did not add these either. This truck was base coated with Green Ochre plus a touch of white, again the tyres are Dark Rubber. The wash this time was Army Painter Soft Tone and the drybrush Dark Sand. Unless mentioned all the paints are Vallejo. 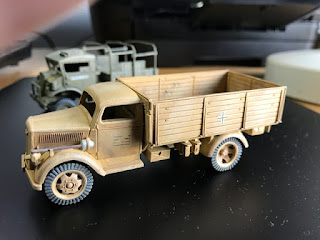 Despite knowing better I have now looked up the paints necessary for WWII Russians, no intention of getting any of course, Russians that is, you always need new paints. I have a mind to get some more vehicles and possibly some new troop types for my existing forces here and there throughout 2019. I really do need to get back to those grenadiers.

I have just finished the Waterloo book I got recently and I found it very refreshing and didn't realise how far the British centre had been pushed back during the battle and how close it had been to breaking. On the strength of this I bought Tim Clayton's latest book this afternoon as I have nothing standing by at the moment, I also realised I have an earlier book of his which was a superb read on British submarines during WWII. I highly recommend this author if you have not read any of his stuff.

Catherine Nixey's book on the rise of Christianity in the Roman Empire that I mentioned earlier was also a great read, I also think there is a lesson for us in it, a small, almost unknown minority, manage to take over their known world, while here we are also being taken over by minorities with their new 'religions' and cannot gainsay them.

I almost forgot, I have pledged my second ever Kickstarter, Terrain Tutor Mel's upcoming book. Looking long term I would like to upgrade my terrain at some point.
Posted by George Anderson at 15:36