Right, what with one thing and another it has taken me ages to get the grenadier battalion finished. I had thought of doing one stand from each of the regiments I had already done or was planning to do but decided this was too labour intensive. I therefore split the battalion into grenadiers from only two regiments, ironically two which I do not have.

Anyway I chose the 55th (green) and the 23rd (blue) regiments, the latter being the Welch Fusileers I am not planning at the moment to add either of these to my forces. Quite a bit of lace work and I just noticed on the photographs that one guy has slipped through with a bare left sleeve, need to get that done asap. I am pleased with the look and after one more British cavalry regiment I will have to make up my mind to do more British or move on to the Hanoverians etc.

I have quickly managed to get my 75mm howitzer done, it was not a complicated paint job, I tried to reduce the camo colours to show they had faded but it is hard to do without an airbrush. I have decided to use Dark Sand for the base coat now, the camouflage was Mahogany Brown, I can't remember now which green I used but any matt green is fine, I added a dollop of Dark Sand to both these colours to try and show fading. Dark Rubber of course for the tyres, at this point I always try and remember to order Black Grey but then forget, then a wash with Army Painter Soft Tone, black bits with a sponge and some very subtle rust streaks with MIG Dark Rust. The awkward figure on the gun looks OK now as I put some sand under one end of his base and it leveled him up. 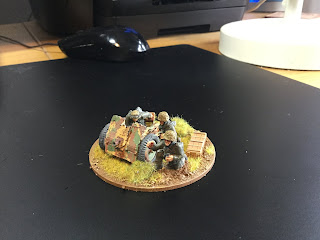 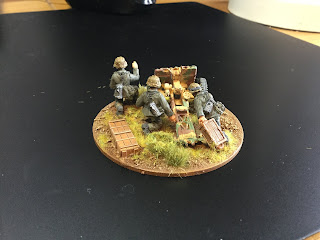 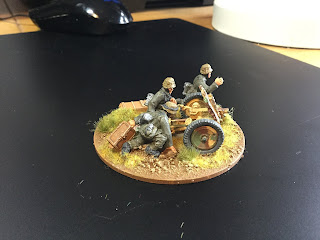 I put a base coat on the Priest this morning and will give it another one shortly, why is it you always see bits you missed no matter how careful you are.
Posted by George Anderson at 18:16