A success at last.

I was supposed to be playing SAGA last night, practice for a club campaign, I am Byzantines and Saxons, a goodie and a baddie, although I suppose it depends on what side of the Theodosian Walls you stand on. Anyway Simon fell by the wayside and after some frantic messaging Rob and I decided to do Bolt Action, it was a chance to maybe get some new units on the table.

My three new halftracks were 99% done by last night and I was tempted to take them but in the end my Wargamers OCD would not let me, finished units only. Rob brought his Italians with some laughable little  tanks, albeit one was a flamethrower and we all know I hate flamethrowers. The Eyties had only just changed sides and the local garrison had taken their German liaison officer prisoner, his men were determined to rescue him. To this end I had a fairly balanced force with infantry, two armoured cars, one a Puma, and my new 75mm field howitzer, the Puma I thought would take out the risible tanks and the gun would settle the infantry, job done.

I decided to make my main effort on my right and centre, my infantry edged forward while all the time waiting for the supporting artillery to suppress the Italian forces around the house where the officer was being held. A sniper had killed one of the artillerymen on the first turn and this seemed to throw them off their game as they either hit the dirt or fired blind hitting nothing, my infantry would have to take matters into their own hands while glowering up at the nearby heights. I now brought my second wave on and before they could get into their stride an Italian flanking force hit them, well they should have but the dreaded flamethrowing tank missed and found it had no fuel in the tanks. Despite this both the little tanks and nearby infantry poured fire on my Hanomag and the squad being carried refused to come out, the armoured carrier was effectively taken out of the game. 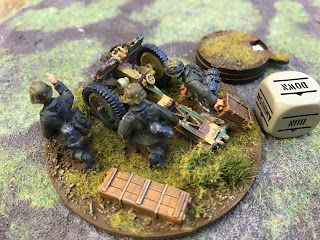 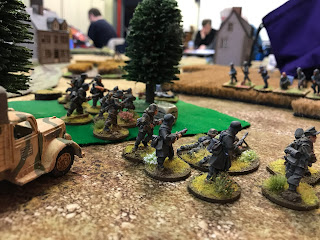 No worries thought I, the Puma would sort out these arrogant spaghetti eaters but no, the only time it managed to hit one of the tanks the shell bounced off, and these things normally could not stop arrows! Luckily Rob's bad luck evened things out as his mortar and anti-tank gun were just as bad as my seemingly useless artillery and armoured cars. I at last managed to get my squad to abandon the doomed halftrack only for their panzerfaust to also fail against the Italian armour, the Italian infantry managed to get their own attack in and took out the 251 just as I was hoping to rally it. 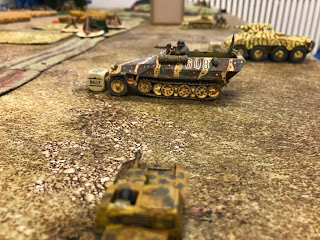 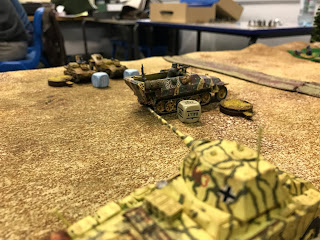 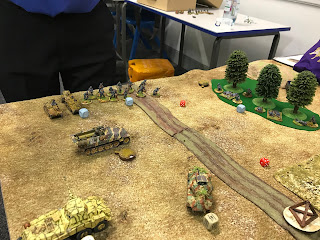 As the end move rushed towards us my gun had at last landed a shell on the Italian defenders and, as I had hoped, caused heavy casualties and pins, this also allowed my own infantry to close and shoot down the anti-tank gun crew and the suppressed squad, which was supposed to have happened at least four moves previously. I had also run the Puma up to the prison house and sent an HE round through the wall, wait, my own man could be hit, luckily he was not and a squad of Germans kicked what was left of the door down and rescued him at the last minute. 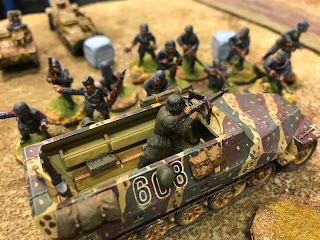 A quick set up and a great game, both of us had some rotten luck but I think this time Rob had the worst of it, I really enjoyed this tussle and no big cats, maybe next time. Although I joked above about the little tanks those Italian tankers were brave men fighting in those and they were lovely little models.

On the subject of models I have now finished all my latest kits, the trio of SdKfz 251's are ready to join the army. I will not go into the details of how they were painted this is elsewhere, but the colours are as follows, unless noted all are Vallejo Model Colour :-

I think that about covers it, Panzer Aces is a Vallejo line with some nice vehicle paints. 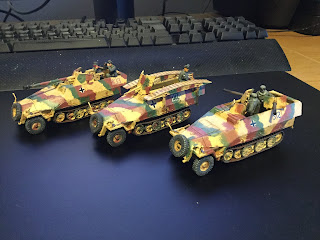 I now have a battalion of French SYW grenadiers to get ready and primed, these will not be finished quickly as I have too much on over the next month or so to give them more than a few hours attention a week. I also noticed on Facebook that Rubicon are about to release their second quarter kits, I don't need the LRDG truck but I am tempted with the Nebelwerfer and the heavy rocket launcher and how can I refuse to build a Wirbelwind as I am sure 2nd Panzer (nominally my German forces) had some in Normandy, some research coming up.

Posted by George Anderson at 21:42