Rob has went overboard (forgive the pun) and bought Black Seas from Warlord Games, a game based during the Age of Sail, a follow up from their WWII Cruel Seas, I was invited to take part and dutifully braved a cold, dark night and headed off to Lancaster.

I am unsure what comes in the starter box but Rob had six brigs, the rules, lots of rulers, turn thingies, wind direction and tokens, all very nicely done with the rule book looking very nice with lots of eye candy. It did have an index but again the typical Warlord Games Index Light, maybe I am wrong but that's what it looked like to me. The little ships arrive unpainted but there is a guide in the rules, these are very nice and Rob had done an excellent paint job on them and even managed rigging on most of them. Like Cruel Seas the ships will be a big attraction for wargamers and do seem to be reasonably priced. 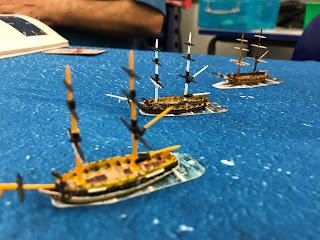 How does it play, it is quick and enjoyable and just the ticket for a club night, granted we only had six small ships with only a couple of guns for a broadside, how you would get on with a squadron of 74's has yet to be seen. Everything is fairly simple and as long as you understand the weather gauge (wind) then you can be off to a flying start, depending which way the wind blows of course, I struggled a bit with this but caught on better during the second game. In order to deal out damage you have to get in close and personal and the best way to injure the enemy is to cross the T and rake the bow or stern.

I expected an upgrade or extra dice due to my service under the White Duster but I was howled down by the other players. The first game found the British and French escorting a merchantman which had to get off the opposite side of the table, the wind was against us (British) so the French came on very quickly, I think we had decided to sail up the right flank but the wind forced us to divert to the left, this meant an uneven fight with the three British ships against the two French brigs while the merchantman used her speed to sail off into the wild blue yonder. My hearty gun crews dealt out death and destruction to one Frenchman at close range so much so that she struck her colours, this little victory of mine was marred with my sister ships almost ramming me and one getting stuck alongside which despite hacking at spars and rigging remained an impediment as the game ended. Nonetheless I had earned a prize, my crew were very pleased.

The second game involved two French brigs and two British both trying to root out a nest of Spanish privateers sheltering under a fort, so in effect two vs four. Again the wind favoured the enemy however I managed to use it to my advantage and as a Frenchie hove into sight I opened up on her as the privateers sailed past, I then managed to sail past her stern and delivered a devastating broadside into her. This killed most of the officers and shattered the command and control along with starting a fire. With typical Gallic flair the French put out the fire and sailed off as fast as they could for home as I tried desperately to turn and catch up. My efforts however put me in an excellent position to take on the second French brig "Marines at the ready, make fast the enemy lads!" I laid my little ship alongside and in my minds eye I saw myself leap on to her mainsail, stick my cutlass in and glide to the deck as it shredded on my way down, eat your heart out Douglas Fairbanks. Back in reality my dice beat the French dice and she struck her colours while I magnanimously accepted her captains sword. Two prizes for Captain Anderson, the Sea Wolf, move over Horatio.

There you go, a good evenings entertainment and I have to say a fine game to play of an evening. The mat is from Deep Cut, it is cloth and worked very well with these ships.

Posted by George Anderson at 10:22