Chain of Command at the club last night, and a typical miserable night weather wise. We took a scenario from the Kampgruppe von Luck mini campaign, a probe by the Germans where I had to get men into the enemy deployment area. You do not get a lot of support options in this campaign and the only vehicle is a hybrid assault gun  added to the strength of 21st Panzer Division, there is such a vehicle available from Warlord but hey, I am not made of money and besides it would not turn up before the game. 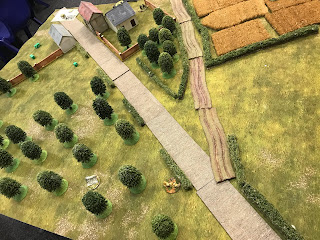 I therefore thought it best to overwhelm the elite British paratroop defenders so chose to bring four squads supported by an MMG and a Forward Observer with an 8 cm mortar off table. I don't think I got great Jump Off Points but I managed to keep the British points well back from the centre of the table. I moved a squad up through the nearby orchard, no idea why in hindsight, but it proved a good move in the end as Rob deployed most of his men in and around the farm buildings and they drew his attention for most of the game. At first these brave men gave as good as they got and inflicted a fair amount of kills on the Paras, but as time went on they took more and more kills and shock and right at the end broke for the rear having done sterling work by simply holding their ground. 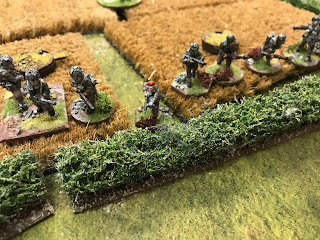 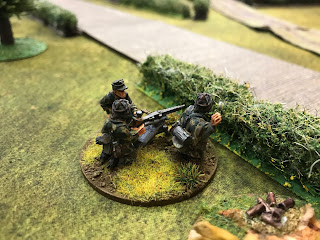 On the right flank my MMG team drew the attention of a British mortar and smoke clouds began to hamper my shooting, eventually closing it down alltogether, however before this happened I managed to set off my barrage on the Paras defending the large field to my front. they tried to run but one team was caught and pinned, in subsequent moves I shifted the barrage (I think I got a double turn here) to catch a second team. I now brought on my remaining three squads and ran them towards the pinned Brits, my right most squad made a run for the enemy deployment zone while I got ready to sweep the field with machine gun fire when I lifted the barrage. At this point Rob surrendered. I learned more rules of the game and felt I had handled my troops better if not brilliantly. 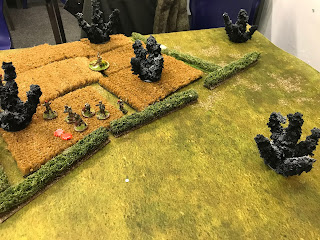 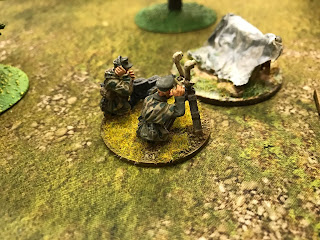 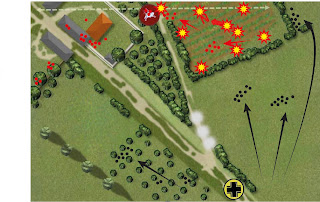 I have had to order up more Russians, I did not realise how easy it is to paint WWII Russians and since Friday have got two squads ready for basing with one nearly finished and the last primed waiting in the wings. I went for Artizan figures and in the main they are nice if a bit unimaginative, the second guy in the LMG team is a bit wooden and looks to be in an awkward stance, the actual machine gunner is fine. For some reason these LMG's do not have bipods, I know they are probably a swine to cast but I do find it strange, if my eyes were better I would glue some wire on to them but it would be more trouble than its worth.

When I ordered up the extra supports I went for a couple of snipers, at £3.00 a figure I thought they were a tad expensive but hey I only wanted one team, however I did throw the towel in at the £3.20 postage. By all means I'll pay for the jiffy bag so put 20p on to the £1.06 first class postage, in fact take another 50p for your trouble walking to the Post Box, but don't expect me to pay £3.20. I mentioned this in passing to where I eventually did get the snipers and got an almost standard reply "some are only little firms" well that may well be the case but postage is postage no matter what size of firm you are, also I know large and small firms whose postage prices are completely reasonable and not robbery.

Black Powder next week and a Chain of Command weekend at the end of the month as Stewart and I continue with the Scottish Corridor campaign.
Posted by George Anderson at 13:53