What a shame (he said insincerely)

My son and I are giving Chain of Command a try, I have dabbled a bit recently but Stewart and I kicked off The Scottish Corridor campaign set in Normandy a month ago and got through the first game, this weekend was to see us move forward hopefully by several game turns.

The first game was on the left flank of the Corridor as 'Das Reich' and the 7th Seaforth Highlanders moved into the village of Le Valtru. I was looking forward to this as both sides had a lot of support points and it should be an even fight, I took a Firefly, a Sherman, an adjutant and a pre-game barrage, I was feeling very confident, I hoped the Germans would be delayed by the barrage and I could simply overwhelm the front line, boy was I wrong. I did manage to get a few more troops than Stewart on table along with both my tanks, the Germans had two infantry squads and next up was a Panther, just what my Firefly had been patiently waiting for, bang and zing as the shot barely took off the paint. I had decided to be aggressive in this game so when a German squad decided to pop into the open I moved my squad up on Tactical, this with the hedge gave me Hard Cover, OK maybe I would take a hit or some shock but then I could wipe out the over eager Jerries. No, that didn't happen Stewart threw almost 20 dice and got 8 hits, my boys faltered, a further volley got 10 hits, I lost teams, my leader was wounded then killed, the survivors ran for the hills, my Force Morale plummeted. The Panther meanwhile had taken out the Firefly, the Germans had settled in to the hedgelines and my miserable efforts at putting down smoke were upset by the lousy aim of the mortar team. I thought this was going to be an even stevens fight as we both had a pile of support points but as that one squad and the tank disappeared and more Germans turned up I retreated, head and brick wall came to mind. 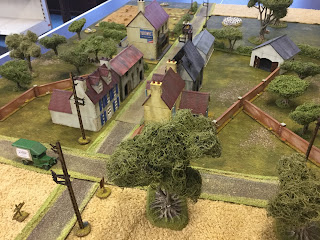 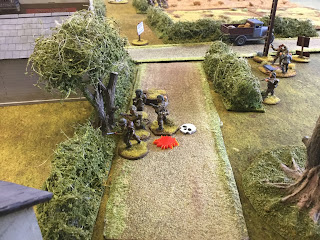 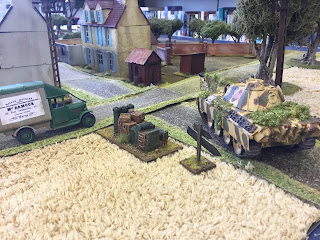 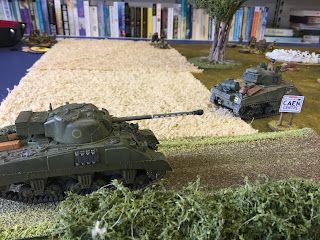 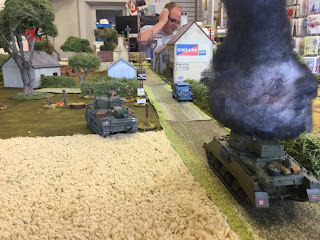 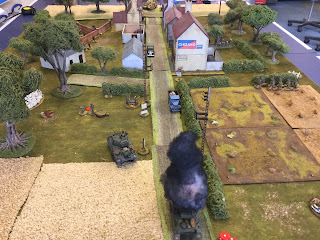 Not only was the battle itself a catastrophe, Stewart's firepower and and his excellent die rolls stopped me dead, my after battle results landed me in hot water as my men began to be wary of Lt. Carmichael and were really unhappy with him, my Force Morale would now take a -2 hit. Kampfgruppe Weidinger from 2nd SS Panzer had pulled off a startling victory, the town of Le Valtru had fallen, the Corridor had now lost ground on both the left and right flanks.

Meanwhile on the right flank Kampfgruppe Frey from 1st SS Panzer Division was attacking into Mouen having pushed the British from the outskirts, as I was the defender this time I only had six support points to the German 15. I decided to take some entrenchments and as there would inevitably be a German tank turn up two PIAT's. I simply lined a hedge line right across the enemy advance. Sure enough a PzIV rumbled on to the table and began to pick off my guys who could not really reply to the tanks big gun. I did manage to get several PIAT shots in but as the tank stayed at long range from this weapon it really was no threat at all, Panzer grenadiers slowly made their way forward on my right and although the entrenchments helped my guys started once again dropping dead. My bad luck continued and I was forced by a random event to deploy my reserve, I compounded this by putting it in the wrong place. As teams started to die or rout my desperate Force Morale dropped even further, very soon I was on four command dice and as things got worse and I could see no way of stopping the Germans I once again left the field. 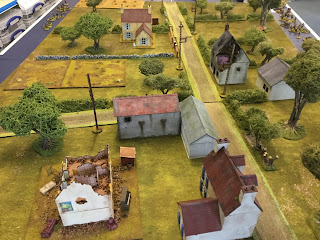 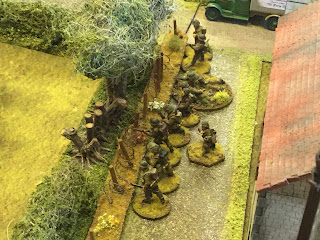 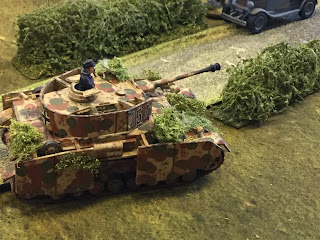 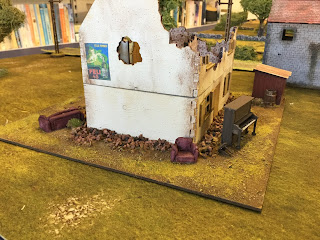 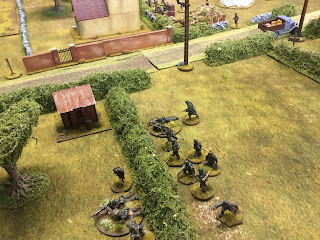 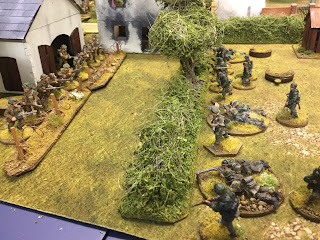 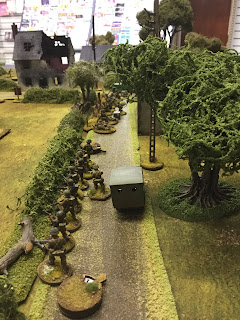 Again Stewart's shooting had been deadly and my bad luck allied to being rubbish had done for my boys, Carmichael was thoroughly disliked by now and he was hovering on the brink of losing more morale points. Mouen had now fallen and things were getting desperate for the British.

Back to the left flank and I decided not to fight this as again I only had six support points and that would certainly not be enough to halt Weidenger, so as the Jerries exploited their win at Le Valtru the combat moved again to the right flank.

I played my Wild Card on this next game (we got this wrong but hey ho) so hoped my counter-attack could retake Mouen, I took a Churchill this time, an extra squad and some support teams, the enemy were also hit with a pre-game barrage, what could go wrong. Well let me tell you, the left flank was wide open and the ground deadly, I had to start behind the hedge line and as Stewart managed to get a squad opposite so anyone moving there was going to take a lot of hurt (see terrain mistake below). I gingerly put two squads up on my left and had one hold that flank while hoping to advance the other along with the Churchill, the same Churchill which had had its sights damaged by a PzIV, for the rest of the game these tanks hurled shells at each other from almost point blank range with no effect, added to this I had a PIAT team also firing, hitting but doing no damage. Once again my morale hit rock bottom as a squad disappeared along with a couple of teams who broke, crestfallen I called the risible attack off. 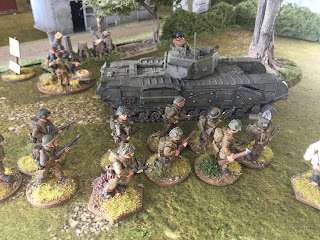 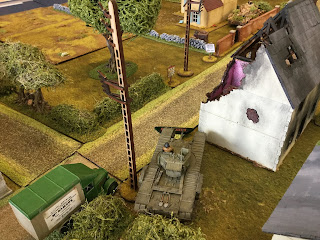 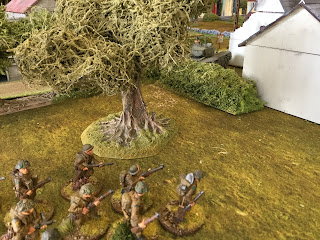 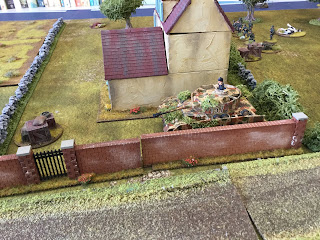 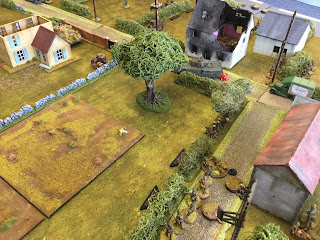 After checking my officers opinion and that of his men it became obvious that the Corridor was going to be cut as I had lost my counter-attack and my morale now started at -3 while the Jerries were at least +2 over the maximum and as they had held the ground and won all the games only had one gefrieter with a slight graze on his elbow as casualties. In consequence Operation Epsom had to be called off and the Normandy campaign put back by at least three weeks.

The loss of the first game was in great part due to the exceptional die rolling of Stewart, he was not so deadly in the second but my bad luck did seem to continue, as I said I am not the best WWII player and no doubt could have done things different but what? The third game I did expect to handle much better but it was not to be, maybe I should have gone with a couple of tanks rather than rely on the Churchill's heavy armour which was not as heavy as I thought. Oh, and I have just realised while typing that because I did not have enough low walls we had used hedges with stone walls in them and then promptly forgot this, so I should have been able to shoot across them but didn't, I have found my excuse however and will wheel it out whenever Stewart crows about his victories.

A good weekend playing on some lovely terrain and pushing some nice wee sojers around, I must do better. I wouldn't be me if I didn't have some gripes, and while most of it was either bad luck or bad judgement on my part I do find that Panzergrenadier squads are over powerful, yes you can use smoke, yes you can use fire and movement but if you don't get the command dice or your smoke goes astray or your men get almost wiped out by the first volley as they move into the open then your goose is cooked. For some reason you cannot choose heavy mortar support in this campaign and it was sorely missed.

What next, I will work on completing the Russians for the Konigsberg campaign, in the meanwhile perhaps we can get a Johnny Reb or War and Conquest game organised, I feel the need for a win.

Posted by George Anderson at 18:46