I forgot to mention what else was going on at the club the other night, the Bloodbowl league had two games going, we had X-Wing and there was a massive, very good looking, game of Frostgrave over which hunched most of the club members. I don't get it, it is sweeping everything in its path, why? I played it once and it was OK but like Chain of Command I don't see me trying again. Maybe it is the fantasy thing, I could quite happily play Deadzone again with my Enforcers, but Frostgrave, looking for treasure with a bunch of people who you would probably find drinking in the Carnforth Inn, the characters I mean, not the players, just doesn't appeal. Anyway, if I have learned something in over 40 years of wargaming it is each to their own.

I have bought more Romans, relax, it is only four slingers to give me a choice of up to sixteen troops, I am however looking closely at the army of my chosen period and wondering if I can add some exotic supporting acts. Maybe those Palestinian clubmen or camel riders as the Twelfth is based in the East, I have a feeling they are earlier than my period, but we will see.

I think I have found a way to get some of those lovely Saxon miniatures, I am upgrading as you know my Dark Ages stuff in a month or so and was simply going to pop the extra figures on the ends, but if I cunningly put them in the middle I shall need officer types, hence the beautiful Saxon miniatures. 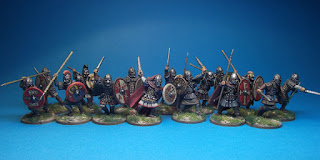 My son is building a Western Frank army, I may have mentioned it, and as this will be his first proper wargame army, he dabbled with Wars of the Roses and Warhammer on which he did a fair job. He primed his archers and it all went horribly wrong so he decided to remove the paint and try again, but the bright spark who put the 'how to' video on YouTube forgot to mention the very important fact that if you use Dettol do not mix it with water or it melts the brush you use to take the paint off onto the figure. I cannot count the amount of times I have followed drawing tutorials and thought I was going mad only to find out a vital piece of information was missing all the time. Anyway the said archers have now been defrocked properly and await priming tomorrow, when I will be in the vicinity to blame if anything goes wrong again. I have looked at the list and they are a tough set of hombres to meet on the field of glory, I am looking forward to it.

I have decided once again to try and find someone in the village willing to play wargames, I know it will garner no interest at all but I just have to try and get more games of War and Conquest in than I get at present. I have used the BBC series 'The Last Kingdom" as a debatable hook. And talking of the show the hero is beginning to grate on me, he looks nothing like his contemporaries with the daft top knot and long hair and every time I see him take two actions to draw his sword from off his back I roll my eyes to the heavens. I am trying so hard to like this but I am failing. 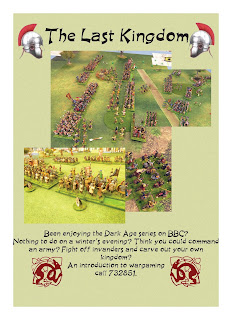 Posted by George Anderson at 15:41