I am now fully committed to Bolt Action not having received the rulebook, bought one soldier or looked down the barrel of a medium anti-tank gun. I finished off some maps this morning and have given the afternoon over to perusing what I am going to need in the future and hoping to have it all at hand when I do buy the guys at the sharp end.

First up are the paints, in between serving annoying customers braving the pouring rain to come and annoy me I settled behind my screens and got started, I get most of my paint from Emodels as they are extremely efficient and swift with their orders and generally a decent price. Colours for the infantry was fairly painless as I bought two Vallejo sets, one German and one British. 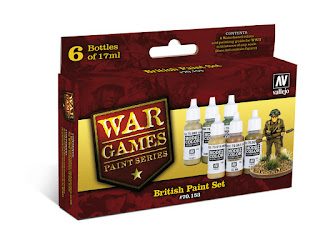 The colours for the vehicles was not so straightforward, some sets factor in SRF and some don't, you have no idea what SRF is then let me enlighten you, it means that if you paint your little tank in the correct colour, because it is little it will be wrong when looked at, so some manufacturers now proudly proclaim that their paint now looks perfect on a little tank due to built in SRF. Maybe you already knew that, I didn't and I wonder if it bothers wargamers as opposed to military modellers, I suspect not. 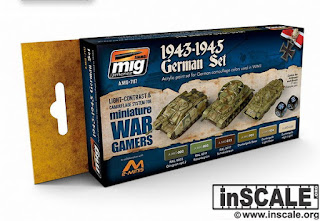 The range of paints and accessories available is astounding, you can have five shades of the one green to get your tank just perfect or you can cover it in European mud as opposed to Saharan mud and your mud can be dry or wet, you can spill oil and grease on the engine covers, you can give wooden parts mould. I was under the mistaken belief there was only one kind of rust, but no, there are huge variations, burnt out vehicle rust, abandoned vehicle rust, winter rust and plain old rust, no, there is no plain old rust. 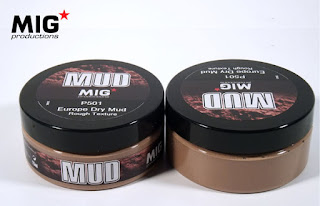 I like to get the best kit possible and I immediately thought of an airbrush, but that was a step too far even for me, there are vehicles in Bolt Action of course but not enough that I could justify buying an airbrush. I have a sneaking suspicion it would turn out too 'footery' for me anyway and way too much effort for the odd vehicle, so I am sticking with brushes.

So what have I ended up with for my two hour surfing, as I mentioned above the two infantry sets and a basic vehicle set all from Vallejo along with their Russian Uniform green for my British vehicles. I settled on Ammo by MIG for the rest, which was a struggle as I like everything tidy and all my other stuff is Vallejo, yes I am a nut. From Ammo I got the late war German tank camouflage set with SRF naturally, and a rust for tracks along with a dark rust for general weathering and some European dry rough mud.

I also got in touch with Warbases today and got them to make me a couple of custom movement trays so that I can use my Dux Britanniarum troops as extra units should I require them for WAC, which I mentioned before. This way I do not have to struggle to remove them from the pennies I superglued them to, it can be done but it is tough going and they should still be on a more or less 'official' frontage for WAC. I will however have to change the Romano-British shield patterns as they are basically more like Late Romans at the moment. Warbases are terrific to deal with, I only wanted two of the trays and it is no problem for them.

So, we are off and running, there is nothing quite as exciting as starting a new period and the anticipation of all that lovely stuff arriving.
Posted by George Anderson at 16:15