I have just rushed on and completed my last unit for 2017, the Seleucid Royal Guard phalanx, I think I have managed this one better than the first, especially my work on the linen armour. The main colour had to be purple as we all know it was particularly Royal/Imperial during this period, also the shield pattern I chose was also purple so it all blends. I was tempted to do a bronze edge to the shields but settled on a colour, perhaps the next phalanx will have a bronze edge to the shields, we'll see.

I even managed to do the pteruges better, this time I gave them a dark wash then drybrushed with white, I had to do this a couple of times but it was far quicker than painting them individually, although I do this with the officers. I normally use Tamiya Smoke over the armour as soon as I paint it, but this time I left it until after the varnishing, I thought this would prevent me having to give the bronze a last touch up for a shine after the matt spray as the Smoke leaves a shine as well as giving depth. To be perfectly honest either way is fine as they both look good at wargaming range. 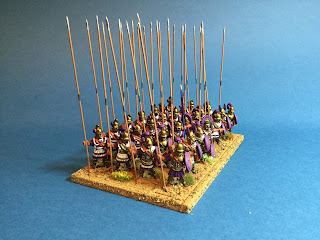 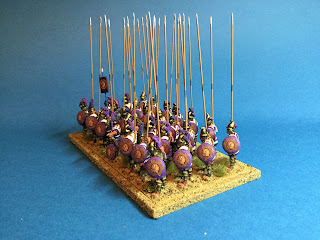 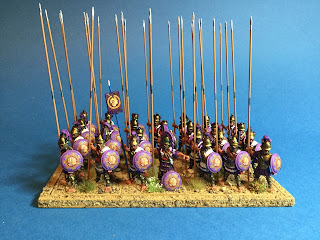 I have the figures to make up two more phalanxes of 28 men each, I think they should be finished by the end of February if not before, when I will be looking to get the rest of the army. Aventine have put back the release of their new cavalry and some foot but I am hoping they will be in the shop by February. If not I shall get the second elephant and my generals along with some civilians for Strategy Points and complete my Rally Point, by then surely I shall be able to get the cavalry. Even without these I should have 2,000 points ready for a club game by mid March at the latest.
Posted by George Anderson at 14:52