After the high drama of our last game I suggested a Dark Ages set to with no giant beasts, wheeled blades or large pointy sticks, to this end we went with Romano-British (Kevin) and Saxons (me). These two armies are similar in that they are 'shieldwall' forces however the Romano-British have a slight edge as they have access to better equipment i.e. large shields.

We deployed unit for unit and as the lines built up I decided to go for the British right flank and hold back my right, the enemy had most of their heavy infantry in the centre and right with cavalry, massed archers and low grade troops on their left. 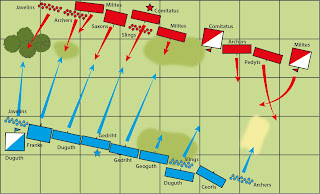 As the battle started I advanced aggressively with my extreme left and although I drove away the skirmishers they did not rout and disappear which upset my timetable of swinging my cavalry in against the British line. This left things to my mercenary Franks, you know the ones, so I was a bit unsure as I charged them in against some Milites, however they had come through for me in their last game and sure enough they did so again. Meanwhile the unit to their right had been hit by the Saxon mercenaries in the hire of the British and to my surprise crumbled just as quick as the Franks' opponents, I lost my Atheling with this unit, so I was one leader and two Initiative points down. I was not unduly worried however as this tit for tat meant the Saxons could not turn against my line and leave the Franks and cavalry in their rear.


On the right flank I had now decided to advance and hopefully sweep away the polyglot forces to my front, I had to move my skirmish screen from in front of the unarmoured Duguth to give them space to charge the archers but they took horrendous casualties as they approached, enough to make me wonder if they could beat the archers in close combat. The Ceorls I set off to meet the Pedyts with missile support, confident I could win the fight, if not it was on the extreme edge of the battlefield and would have no effect on the overall result. 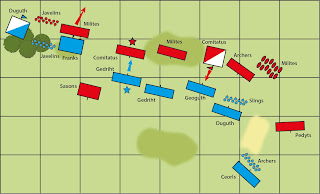 Things had slowed down on my left as we both reorganised, I had had to commit my King's bodyguard Gedriht against the British Dux and his Comitatus, the unit had been ground down by javelins and I was asking a lot, I would have retired them but it was just too dangerous. The lads fought well but were routed, however they surprised both Kevin and myself by rallying and fighting back once again, over the body of their dead king, before eventually dispersing, both my main leaders and all my initiative points were now gone. This tough stance again stopped the British from turning in on my line. I now threatened the Saxons with the cavalry while keeping them from actual harm and brought the Franks back into the fray. The enemy reserve cavalry had turned up and got too close to the victorious warriors and the Franks hurled themselves at the cavalry and broke them. My options were running out in the centre and I set my second Gedriht unit towards some Milites on a nearby hill hoping for a quick victory. 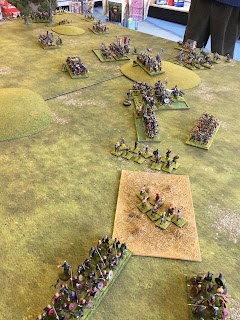 Back on my right the British Comitatus cavalry had crashed into my young Geoguth, but the boys had held, however the fight turned into a very hard slog as it was difficult to kill the well armoured horsemen, but eventually they were wiped out, though much too slowly and expensively for my liking. The Pedyts now charged my Ceorls otherwise they would fall to missile fire, again I cursed the gods as my Ceorls ran for the hills despite everything being in their favour. My Duguth had now managed to close with the massed archers and took their revenge, the archers who survived ran for home. 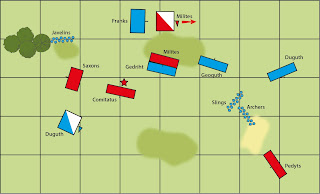 In the centre the British came off their hill into the Gedriht, an easy victory seemed to loom, but no, it was a stand off. It was time to call a halt, it had been a long, exhausting battle, a real slogfest, Kevin was willing to give me a win but I called a draw, with my Gedriht settling down for what looked like a long struggle on the hill, the units I had left were in poor shape, apart from the Franks and cavalry, to inflict harm on the remaining British, I was not confident of eventual victory.

I sorely missed the power of my Ancient armies where combats do not tend to last long, but here in the Dark Ages the melee can last many turns with the result that the victors are left in no fit state to take on fresh troops. The lack of armour is also a shock to the system, especially for the Saxons, if I had had experience of War and Conquest this is not an army I would have chosen to build, it turned up by default as I played Dux Britanniarum and simply enlarged both sides. I do have a sneaking admiration for them but they are certainly the underdogs of my forces.

Posted by George Anderson at 10:38