Possibly over egging it a bit there. I have decided to get out and about a bit more at weekends during the summer, or if we are lucky to get a good weekend. Last week during the beautiful bank holiday weather we went to a food festival in Lancaster, a nice day out, some excellent 'street' food and a Bubblegum mocktail, delicious. Anyway we have been blessed with another lovely weekend, so into Lancaster again yesterday to pick up some olives and cheese at the market and today it was off to Carlisle Castle.

There has been a fortress or castle at Carlisle since Roman times, the remains of which are underneath the present structure, it was easy to get to and there is a big car park where you can sit for the whole day for a mere £2.50. It is also close to the town should you wish to visit, I don't recommend that. 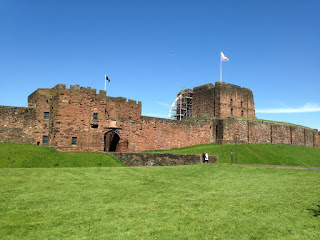 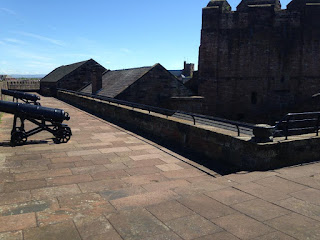 As you would expect the site has seen many sieges by the Scots through the centuries, usually unsuccessful and been visited by many important personages, David I King of Scots died there, Mary Queen of Scots stayed for a couple of months and the famous Border Reiver Kinmont Willie made a daring escape from the place. Edward I used Carlisle as a base for his forays into Scotland. It is perhaps best remembered as an outpost of the Jacobite's during the '45 Rebellion, the 'old hen coop' as the Duke of Cumberland described it surrendered after only a week of bombardment, its occupants shackled and imprisoned in extremely harsh conditions, soon to be joined by further Jacobite's captured after the Battle of Culloden. At least 31 of these unfortunates were hung, drawn and beheaded on Carlisle's Gallows Hill the rest sent to the colonies. 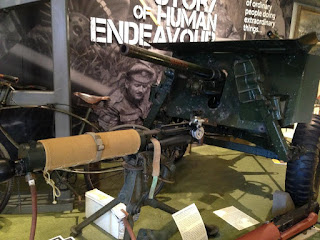 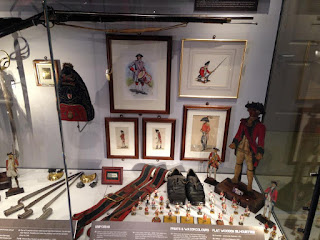 The castle is also home to the Border Regiment which has gone through many changes and amalgamations from the 34th and 55th Foot in 1881 to end up as the 3rd Battalion, Duke of Lancaster's Regiment (King's Lancashire and Border), now there's a mouthful and a sad end. Nonetheless the museum is crammed full for such a small building and if you are in the area I recommend a visit, in fact militarily it was better than my visit to the politically correct Army Museum in London.

But, and there is always a but, on entering the museum we were hit by a large board proclaiming the role of women in the regiment, from camp followers of old to modern day soldiers, and there was a lovely lass with two stripes smiling from the poster to make sure you got the message. "Hurry up and look at the exhibition" we were told as it was about to get crowded enthused the doorkeep, we duly made our way upstairs. The small room was almost empty apart from some photographs of families, wives and children of officers enjoying foreign climes I suspect in the '50's and '60's. Nothing of course from the camp followers etc. of which the poster boasted, we were invited to pretend about the importance of women to the regiment despite the exhibition being completely bankrupt of any proof. 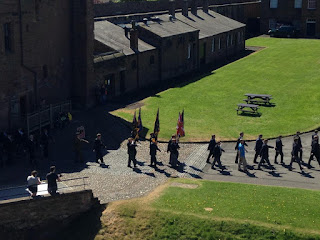 We were fortunate to witness an inspection of veterans and young cadets accompanied by a very smart band on the parade ground during our visit. Despite everything you cannot stop your heartbeat quicken as boots crunch gravel and standards are borne aloft while stirring tunes are played, good on the young ones and the old grognards.

Posted by George Anderson at 19:40