No club last night, I am busy with maps and with the missus away I had to make my own tea, I also have the PO monthly balance today, which the missus usually does so I had preparations for that as well as I don't like to spend one minute in the office more than I have to, I don't get paid overtime. Bolshie, yes, but I have had almost twenty years working with the shower which is Post Office Limited.

Anyway, the Boss is back on Saturday so I am heading off to FIASCO at the Royal Armouries in Leeds, one of my favourite museums unlike the empty, pretentious shed which is the Imperial War Museum North. I digress, I have a small shopping list and hope to pick up some SYW inspiration from some of the traders. I normally only bother with Vapnartak at York but I am treating myself.

I have settled into a nice pace with the Celtae Seniores and might be putting the finishing touches to them over the weekend, where to go after that I wonder, maybe that extra cohort for the Twelfth or back to the SYW, probably the latter, maybe even those Companions from Aventine I still need. 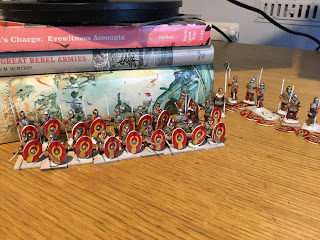 I still want a new drawing tablet but have to wait until my dosh is refunded from Wacom, this is supposed to take three weeks or so which is amazing as they took it almost instantaneously, everything was nice and quick when buying but now things are going as slow as treacle, I expect more headaches before this saga is over.

Right, time to meet and greet Joe or Joanne Public.
Posted by George Anderson at 08:43