I put the finishing touches to the Boulangerie last night on my return from an exciting afternoons shopping in Manchester, of course it is not a Boulangerie now but a Bargain Booze or the 1940's French equivalent.

I wasn't sure about adding the backyard, but decided to in the end, the top of the walls are plain so I added some slates from a piece of card I had lying around, a simple but effective trick. Friend Matt over at The Wargames Table sent me a couple of A4 sheets with all sorts of relevant signs for Normandy in 1944 so I used some of these to dress up the shop de vin. When Matt was last up I was quite taken by his little road signs and these were on the sheets so I cut a few of them out and based them up for 'atmosphere', I think they look good. I don't normally dress up the insides of my buildings but in hindsight I think I should at least spray them grey or some such, I still need the sheet 'glass' for the building but it is good to go, I am going to revisit some of my other buildings and give them a second look. 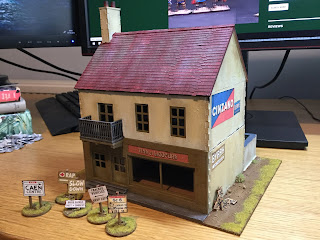 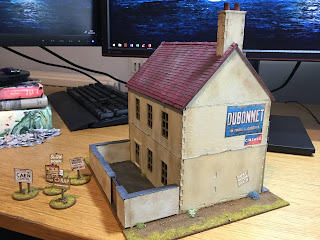 I wanted a church to finish my collection and as I mentioned before I got the Dark Ops Village Church that I had seen on Andy Duffel's blog, Tiny Hordes, I finished building it this morning. The first thing I noticed is that is is bigger than it looks, I was looking for something with a slightly smaller footprint but it fits well with my other buildings. There are no build instructions but the website links you to a video by some guy called Luke, he has those big holes in his ears, tattoo's and says 'guys' every ten words or so, despite this he was a big help. I don't have a lot of patience with MDF builds, I just scoot on as fast as I can and this normally works for me, I don't ever need elastic bands or clips of any kind, holding a particularly awkward piece for a few seconds usually suffices. 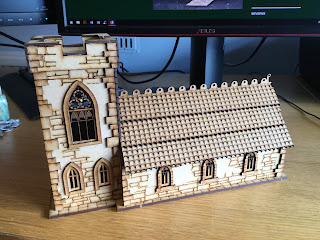 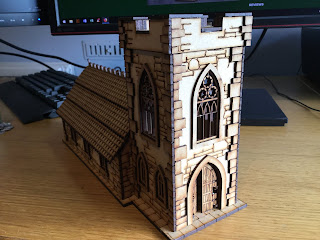 I went along with Luke on the build, but be careful if you get this building and watch Luke, it is best to put the door surround into the main church from the tower and the door frame with the hinges on it on their respective tower sides before gluing the tower together and putting it on the base. I also wondered why some of the roof panels had notches in them, but Luke doesn't mention this until the end of the video when it is too late to take them off and put them back on correctly, watch the video first. For some strange reason he also tells you when putting on the corner stones not to glue them flush with each other but only flush with the walls, this leaves a gap which doesn't make sense as these are the same stones you would see from both sides i.e. no gap. I see Andy cottoned on to this as well.

I also think the church is a bit over ornate for a village church, but at the end of the day for £28 it is a good bargain, a solid building and we will see how it paints up. Using my slap dash method I did make a slight mistake with the roof and one with the inner panels, you won't see the inside and I think I'll get away with the roof once painted and weathered.

My missus actually said if I can build houses why can't I build something for her? Women!
Posted by George Anderson at 11:34

Email ThisBlogThis!Share to TwitterShare to FacebookShare to Pinterest
Labels: Terrain