As usual having no patience I have bulldozed my way through my latest mini project (finalising my WWII buildings) and then some, I got the barns, Boulangerie and the new church which I have now completed, all are based and ready to be fought over. I am thinking of picking up a cheap toy at FIASCO in a few weeks and putting a wrecked vehicle in the grounds of the church, I think it needs something. I also think it looks a lot better now that it is painted, the OTT impression has been softened. 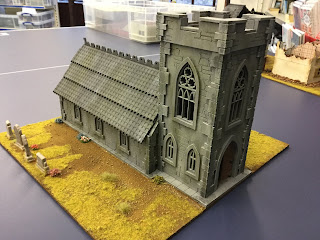 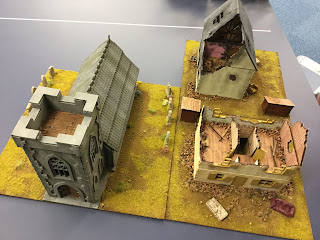 I also decided to revisit some of my other buildings, put them on better bases and add some scatter terrain, one in particularly has always bothered me. I put it on an overly large base and placed the wall in a way that would get me shot by the owner or a real builder, there was no rhyme or reason to where the gates etc. were. That base is now in the bin and the building looks a lot better, I can also now add whatever surround I want be it hedge, fence or wall. So that is it for my Normandy terrain, apart from some fencing and some fields which there is no hurry to pick up. I still have some vehicles and maybe some odd troops to add but as I said, no hurry there. 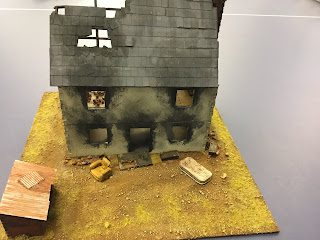 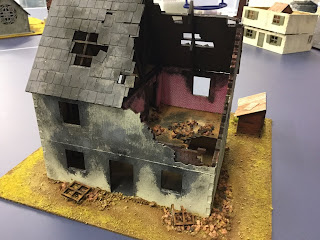 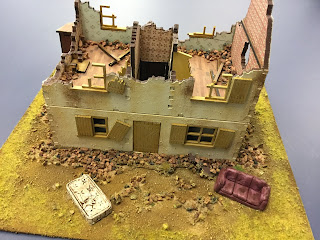 I am now going to get the new Legion started, hopefully cleaned and primed today and on the tray by tomorrow. I have actually retired the real tray apart from using it for priming, it has so many layers of paint on it it could stop a bullet, I use my study desktop now.

New map project starting today as well, a dreadful 20 odd maps which I am not looking forward to, it involves mainly desert and hills but the way it has been sent to me is quite off putting, something to do with Apaches.

Right, quite chuffed with my output on the buildings, now I only need to persuade someone to come and fight over them here at Casa Anderson.
Posted by George Anderson at 09:51