The first build of my new WWII kits was the Warlord Priest, it only had a few parts being a resin and metal model, looked easy. On the one hand the casting has a lot of detail in the cab and the tarpaulin is a nice touch, however the tracks simply did not fit and I had to resort to my scalpel to make them fit, even so they were untidy and one of the tracks had a large bit of flash on the front, which no knife was going to cut. Apart from that it is a straight forward build, I had however to watch a video on where to put the extra metal pieces for the gun, I was uncertain about one piece which the builder does not show going on, I had to work it out from pictures. I had been intending to swap heads in order to make the crew British but gave up with this idea, the metal is poor and the poses did not lend themselves to a quick cut and paste. I did managed to scrounge up a couple of figures from my lead molehill and they will just have to do, although one seems to be doing an impression of "I'm a little teapot." The decal sheet with this kit is pathetic and of no use for a British vehicle, so much so that I threw it away and will use one Warlord packed with an earlier kit. The vehicle comes with the ubiquitous .50 cal. and I was unsure whether to put it on or not, so a quick Google of British machines showed most had kept their machine gun, so I also kept it. 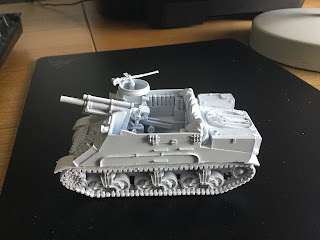 I put aside my urge to get stuck in to the halftracks and built Warlord's German 75mm light artillery howitzer, my thoughts on getting this piece is that it can add high explosive support on the table top and does not take up a tank slot. How will it actually perform on the table, who knows. The kit was easy to build although there were no instructions, sure it only has just over half a dozen pieces but you still need to know how the optics and little wheels go on the thing, I had one wheel which went god knows where, I also nearly got the barrel wrong. The model again feels like an afterthought, hopefully it will paint up fine. There are two really nice chunky crew figures with it but the third is in an awkward crawling stance which is just, er, awkward. 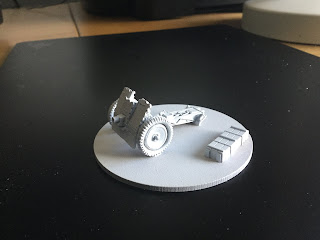 Next up was the Sdkfz 251/16 Flammpanzerwagen, I was looking forward to this little beauty, I am not a fan of flamethrowers in skirmish games but when needs must you have to fight fire with fire. You get the basic 251 D kit and then the upgrade turns it into the 16 with two flame projectiles. An easy build with easy to follow instructions, a large decal sheet and the option of two crew members with either flame protection or none. The only thing I wasn't sure of and it might just be me, but the crews arms seem rather long and they don't fit comfortably into the large cabin as the flamers do not leave a lot of room, but this is a minor point, for wargaming purposes you don't need to add a crew, I will though. 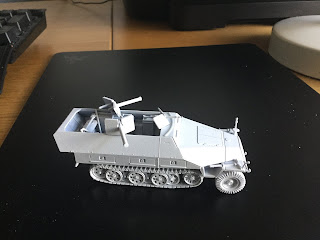 Moving swiftly along while no or very few customers turn up I put mapping to the side and got on with the 251/22 armed with the excellent anti-tank gun the PaK40. Again no problems with this at all, more thought this time has gone into the crew and there are two lovely figures, a loader and a commander sitting on the side of the hull peering at targets. You also get an ammo crate with two shells in it and a loose one, you can only really use the crate if you use a base for your vehicles as it wouldn't really fit in the cabin. I wanted the shells so cut them off their holders and will use them to litter the inside of the 22. All manufacturers should put a few shells or casing on a sprue. 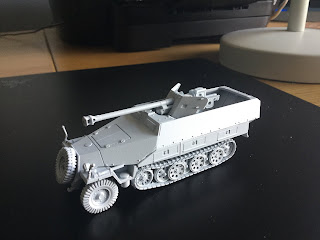 I toyed with the idea of putting aside the last kit, the 251 which can be turned into three vehicles, the ambulance was out so I was left to choose either a 251/10 with a light anti-tank gun or the 251/7 assault engineer model but thought what the hell the customers can wait. This is an excellently thought out kit, you can build it as a normal APC, then if you do not glue the weapons down you can add the 3.7cm PaK for the 251/10 or take it off, put the machine gun back and then hang the bridging thingys on the hull thus getting a 251/7. No crew with this one though, which is no big deal as you can perhaps use the two spare from the flammpanzer (I will have to search my bin grrrr, damn my tidiness). 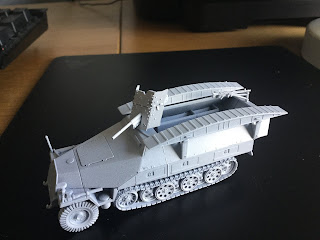 So within 24 hrs I have built all five models and primed them ready to go. I can now relax and get back to some mapping. My last thoughts are that the Rubicon kits are head and shoulders above Warlord's for decals, instructions, versatility and extras and all are around the same price.
Posted by George Anderson at 15:13