Muskets and Tomahawks last night courtesy of Rob and his lovely figures. A fairly simple scenario with none of Rob's usual surprises so we had a British force comprised mainly of light troops and Indians against an American force split between regulars and woodsmen. I took the Scots of course with some Indian allies and prepared an ambush for the Yankee regulars marching along the road, Rob meanwhile held a small farm.

Simon obviously saw the ambush coming and deployed on both sides of the road his skirmishers walked into a hail of fire and were eventually reduced to one man, or woman Reg, who we decided was Davie Crocket although I called him Davina, all that fur. I digress, I advanced my Indians towards the battle line and then thought better of it and pulled them back, I sent one warband towards the farm as the American Green Mountain Boys had turned up and it looked like Rob would need some help as his cannon had had to retreat and was now covering the road instead of cutting down the woodsmen.

As he could not use the road Simon's men were taking an age to get anywhere in the woods and my Scots, Indians and some Provincial Militia swapped volleys with them and would do until the end. This allowed me to send another squad of light troops to the farm as the Green Mountain Boys managed to take one of the buildings and looked like taking the second after cutting my Indians to pieces during an ill fated charge. My boys now took cover in the barn and fought off a desperate last minute assault by the Green boys, our gun had now started taking pot shots at the enemy but its bark was worse than its bite. As the clock ticked down we called a halt and Rob declared a draw, I think night and the terrain saved us.

We always get a good game out of M&T, the initiative is handled by a set of cards and on one occasion Simon, who had shuffled them, managed to get all the British cards to come out first followed by all the American ones! So we managed to deal out some excellent punishment only to have the Yanks bounce back in the second half.

I have been fairly busy with several things this week, the grenadiers are getting there but I took time off to finish my British Jump Off Points for Chain of Command, I took the idea from Stuart at the club to use characters rather than the usual bunch of crates and oil drums, I have some ideas to renew the German JOP's but that will have to go on the wish list. 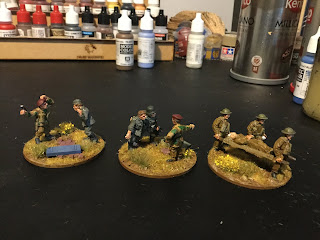 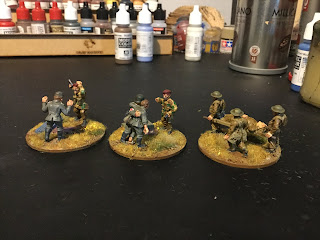 My new terrain pieces turned up from Charlie Foxtrot, a stables which I have admired for a long time and new walls to compliment my low stone walls which are fine but hard to pretend they are six feet tall. What's next on the terrain front, some gardens, sheds etc. I think also added to the wish list. 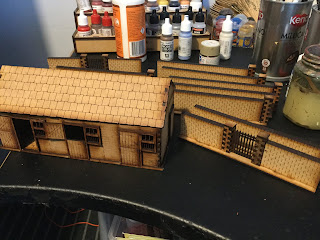 I was looking at some lists both for Normandy, late '44 and '45 with the intention of fitting in a nice little PzIII somewhere, the N version with a short gun was used during the end of the Reich and they have been mentioned in Normandy, 21st Panzer had several in their staff platoons as command tanks, not the N of course. Rubicon have discontinued their model, as much as I love Rubicon kits and look at them first they seem to have some crazy, to me, ideas on what people want, do we really need every mark of Sherman or PzIV, and let's be honest how many of us could actually tell one from the other. So, I will need to go to some shows and scour the shelves for that lonely, bashed, unloved box containing a PzIII or simply get an alternative.

Posted by George Anderson at 10:57