The lads come through (just)

The last time I led my brave boys on to the battlefield was back in May, so when Mark offered to come up from Leicester for a days wargaming I could not resist, I did warn him about the roads but it didn't phase him so yesterday was spent playing War and Conquest.

There are several sets of Army Lists going about for WAC, the original Scarab lists, Gravesend lists and my own (carefully researched for my armies). Mark wanted to use the originals so no real problem for me as the one army I have not researched is the Seleucids and am happy to go with what everyone uses. The Patrician Romans are different, my own list differs in some respects, although I agree with Scarab's use of light armour for all the Roman formations as there is an historical argument for this, but I do not agree that there are no elite foot troops available, the Palatini are average in this list and the bulk less so. This feeds from the fact that the Western part of the Empire was defeated hence their soldiers had to be rubbish, there were a lot less veterans than there should have been but they were not all rubbish, even the Limitani had some good press when forced into the field army. I digress as it is a pet subject of mine. The upshoot was I played with the Scarab list.

First up though was Spartans vs Seleucids, I have only fought with this army a few times and am not comfortable with it. I decided that the Spartans would have very few light troops so as I had some good light troops I would take these and drive in one or both of the Spartan flanks while my main line held back supported by an elephant and a scythed chariot. I took the Companions as it was a new unit and had never seen battle and I knew they would have no cavalry capable of standing against them. The plans of mice and men often go awry, mine was no exception, once the players make their choices of terrain, we throw dice to see if it moves, it all moved and completely snookered plan A and I had no B.

I decided to basically hold the main line back while probing with my right, my skirmishers were to drive away their opposite numbers and then I would inflict pain on the infantry as it advanced. It started well enough but one unit of Spartan slingers just refused to die or run and although I was getting hits I could not kill enough, I got fixated on these guys and failed to make good with my own skirmishers. Over on the right I had decided to trust the companions to sweep away a small unit of hoplites but lost the initiative and instead found myself being charged, the cavalry thus lost all their bonus' and got cut up and fled, some Thureophoroi alongside also got caught and were slaughtered, my right flank had gone. This now forced me to advance my line as I had stopped the Spartan right and my Peltasts were keeping two skirmish units and some cavalry out of the fight there. My first unit to charge in were the Mercenary Hoplites, this was an even fight against some Spartans which with the advantage of charging I should have won, but they were trounced and headed for the hills only to be caught and dispersed. In a last gasp I threw in a phalanx and the chariot, again hoping for a swift result but no, the Spartans stood. 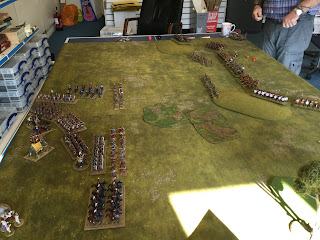 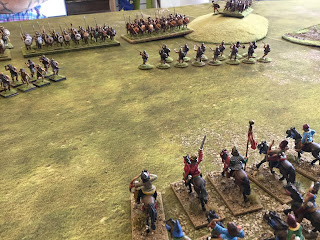 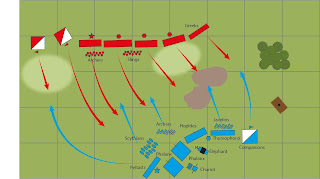 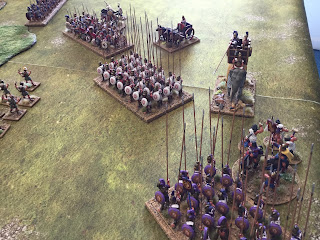 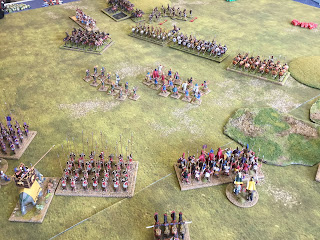 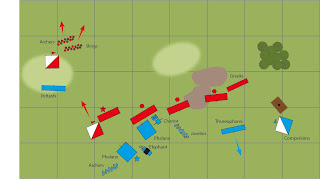 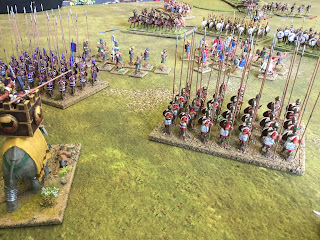 The game was over, time was up, looking over the shattered field the Spartans would have won had there been one or two more moves, but I had held them, no, I had survived and Mark missed getting his objective by millimeters. A very hard match for my guys, almost every Spartan unit was elite and as they get the WAC phalanx rule they are extremely hard to kill, too hard in my humble opinion but hey that's the rules, you really need another Greek or Spartan army to fight them. I also fought badly in this game making some very daft choices which were leapt on by Mark. I must mention the unit of the game, the Spartan slave slingers, they were more than a pain in my side.

The second game was more to my liking, my Patrician Romans vs Normans, and if you read this blog you know I don't like Normans, I had beaten them the last time we met in May and Mark and no doubt his Normans wanted revenge. I took five Legions supported by some Goths and my general's Hun bodyguard along with some skirmishers. The terrain this time was fine and as we deployed unit by unit I put my Legions on the right and centre and the Goths and Huns on my left, I saw a gap in the Norman line and decided I would push it further, I hoped my skirmishers and horse archers would keep a large unit of Norman archers on their extreme right from interfering. Again most of the opposite army was elite. 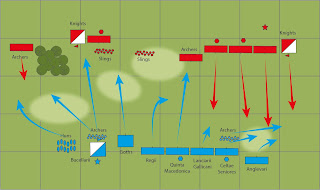 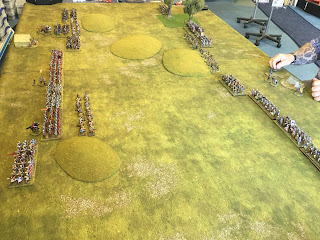 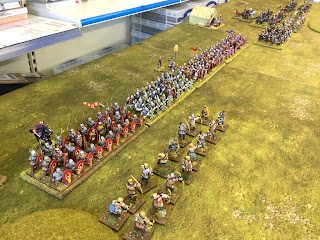 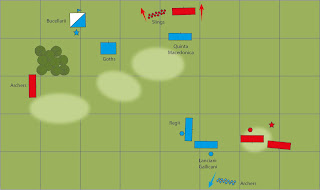 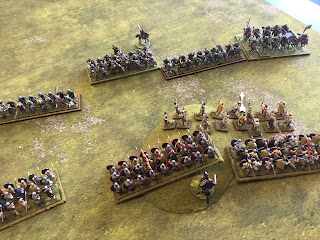 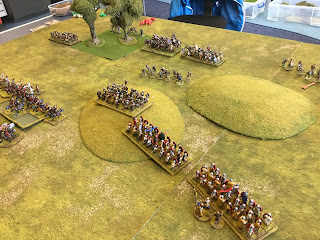 Mark came on bravely on his left and I held my right back while my skirmishers hurled death at the Norman cavalry on this wing, my boys got into position and then went into shieldwall. The Norman advance had offered me the opportunity of advancing into the gap, the Huns and Goths closed with their opposite numbers and the cavalry went in. I wasn't sure if the Goths would shift the Norman infantry opposite so was a bit cautious with this unit. On my left my guys again got plenty of hits on the Norman archers but could not kill anybody, so the archers eventually swept my men away, they now turned into the centre.

I had won the battle in the gap and flanked the Norman line, they meanwhile had crashed into my right. I was now forced to charge the Goths in before the archers got the range, everyone was now engaged. Although I lost my two rightmost legions everyone else was victorious and the Normans shattered, I had managed to pull off a victory. This army suits my style.

A great day with two excellent games and a chance to get some big armies on to the field of battle, a big thanks to Mark for making an effort to come all the way up from down south, he left at 0530 I believe and got here around 0800.

Posted by George Anderson at 11:35