The only way is up!

My son came over for some Chain of Command, completely new to him and still relatively new to me, it was a good opportunity to get some of my new terrain out so I put down the outskirts of a small village complete with local car repair man, Church and Cafe, the terrain was probably a bit too close but I will watch that next time. 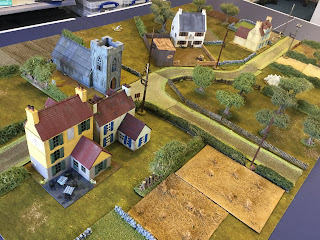 Stewart chose the Germans and I had the British, which is just fine by me as I do not get to fight with them very often, the first game was a delaying action by the bad guys, there were not a lot of support points lying around so I settled on a Humber armoured car while Stewart went for a halftrack armed with a 3.7cm PaK. The Jerries got a couple of squads into a decent defensive position which I thought I could force with help from the Humber and some smoke from the 2" mortar. The smoke was not a big help as I could not get it on target, the Humber missed the 250 and the 250 missed the Humber, however the nearby Panzerschrek did not miss and left my armoured car a heap of burning, tangled wreckage, plan A was again out the window. I still thought I might bring some hurt by deploying three squads but the forward troops were so badly shot up that the numbers simply did not add up. I had to concede defeat. 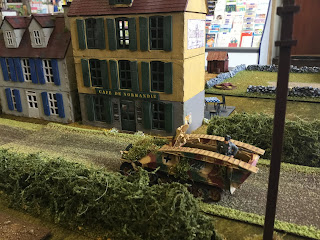 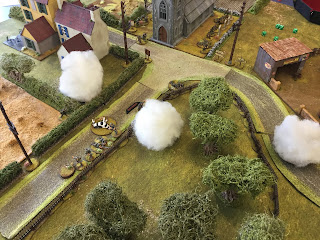 The second game was across the table and an attack/defend scenario, I went with a 6pdr anti-tank gun for support, I had wanted to take an MMG and possibly a sniper or a second PIAT but didn't, I was too afraid of a panzer turning up and thought the 6pdr would handle it, I can hear you laugh as I type.
I ran a squad across the road and  into the Cafe de Normandie, hoping to cover one of the German Jump Off Points (JOP), I was no sooner making myself comfortable than the Panzer IV loosed a shot and made the building unstable, I jumped out tout suite in case it collapsed on me. Meanwhile the German infantry had taken over a large orchard in the middle of the battlefield, I now ran a squad into a house on the left hoping to cover another enemy JOP and stop anyone flanking my postion. Meanwhile on my right the useless 6pdr barked and continually missed the MkIV, luckily I managed to bring on my PIAT and those lads put a round right through the German menace brewing it up. For the rest of the game I turned the anti-tank gun on the Boche in the wood and needn't have bothered, a few leaves dropped but nothing more serious. 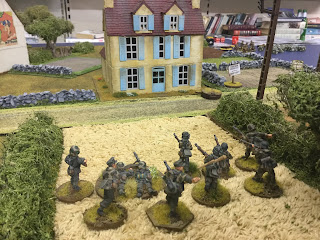 On the left my guys in the house must have been so comfortable they hunkered down and failed to shoot up a nearby German squad in the open, the Germans though were whittling away at the squad and the back room filled with casualties. I then made a daft mistake and advanced a fresh squad to take advantage of a nice target, although I did wipe out one enemy squad I lost my own eventually. This left me with one good squad and the damn gun which had hit nothing all game. I threw the towel in. My die rolling in this game was really dreadful, allied to my bad choices it done for me.

Having a bit of a rest we now decided to leap into a campaign, the Scottish Corridor which is a part of Operation Epsom where 15th (Scottish) division was holding open a corridor against a counterattack by Kampfgruppen from 2nd SS Panzer Division "Das Reich" in the west and 1st SS "Leibstandarte" and 2nd Panzer Divisions in the east. The German attack opens at 0700 hrs in the east with a probe of the defences around Bas de Mouen. The British do not get a lot of support points for this and the Germans get a fair amount, they have enough to bring along a Tiger, who is going to resist a Tiger, so I felt I had to leave the useless anti-tank gun at home and whistle up a Sherman. I started off fairly happy with a JOP near a large house at the crossroads, I decided to concentrate a squad, PIAT and 2" mortar here, and like a fool I showed my hand and brought on the Sherman, I won't do that again.

Sure enough on rumbled the Tiger, bang and boom up went the Sherman, I thought now all the beast has to do is drive along the road and I would be forced to abandon the village, but no. My boys in the Barnier house had evicted the family despite some of the lads wanting to let them stay, had become a pain in the side of the German infantry while grimly holding the building. The Tiger put some holes in the walls but nothing which interfered with the defence, I was hoping that in the heat of battle Stewart would overlook the fact that I had a PIAT team behind the house and that as it rumbled by I might get in a flank shot. I also now brought on two more squads and started putting some hurt on the Germans fixated on the Barnier house. 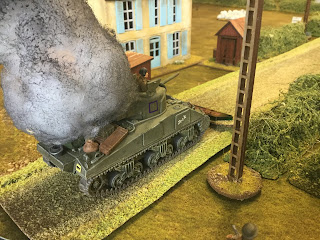 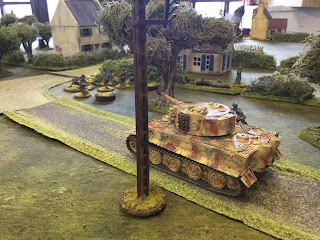 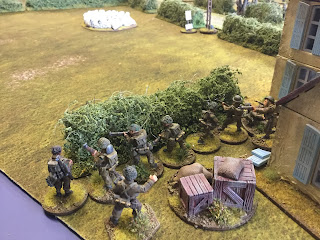 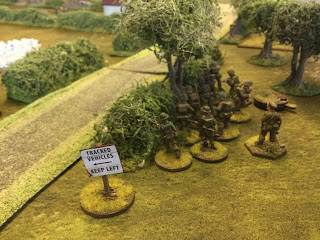 It was all too much for my brave boys and eventually as casualties mounted they broke dragging their wounded sergeant out the back door with them. With the loss of the house it was all up with the Jocks and they wisely decided to retreat in the face of the Tiger. So 0800 and Bas de Mouen was clear of the British.

So, how was it, I enjoyed all the games if a bit disgruntled in the second where I seemed unable to hit or kill anything, we both learned a lot about the rules but have some questions to ask on the forum at some point, we did some things wrong but it affected both of us so no big deal. Not only was my A/T gun useless Stewart's sniper also proved never to have gone to sniper school. Notably I got quite a few double phases in two of the games and in the last I got four on the run. We decided that in future if you get a third role for a subsequent phase the sixes will be treated as fives (chain of command dice) as it just does not seem right that one player can get so many turns while the enemy sit around and die. I really must learn not to bring my armour on too early.

Next month should bring the second game in the campaign, looking forward to it.

Posted by George Anderson at 16:00