The History:
Oswald or Saint Oswald as he became known, had fled along with his family to Dal Riata in Scotland when his father was killed in battle by the Saxons of East Anglia in 616. During this time he was converted to Christianity and no doubt joined his hosts in their many raids on their neighbours. The subsequent warfare in Northumbria meanwhile was brutal and bloody as it was attacked mercilessly by Penda of Mercia and his ally, Cadwallon of Gwynedd. Oswald’s brother Eanfrith, who had become king of Bernicia, the northern part of Northumberland, was killed during this time and young Oswald, with help from his protectors and possibly Pictish mercenaries set out to reclaim his inheritance. He met Penda’s ally Cadwallon on Hadrians Wall and took up an excellent defensive position which secured his flanks, he also raised a wooden cross to inspire his men. Oswald won the battle, despite being outnumbered and the troublesome Cadwallon was slain.

Combatants:
Oswald, King of Bernicia
Vs
Cadwallon, King of Gwynedd

Forces Involved :
Oswald’s army would have his own followers and his personal companions probably very much like Saxons and I doubt he would have attempted an invasion if he did not have at least some back up from Scots or Picts, we know about the Picts, but the jury are out on the Dal Riatans, personally I would treat them as Picts or Irish. Cadwallon’s army was Welsh and is traditionally supposed to have outnumbered Oswald, but perhaps not by much, Oswald was an exile with no base for a large army and Cadwallon had been campaigning far from home as a junior partner of Penda’s and had already been involved in heavy fighting. So either have both equal or give Cadwallon a small advantage.

Terrain :
Oswald engineered this battle to give his smaller army an advantage and chose his ground with care. Both his flanks are protected, one by the ruins of Hadrian’s Wall, the other by a rocky crag, he also occupies the high ground.

Wargame:
A set piece battle in which Oswald has to hold his ground and not be defeated. The cross would have been easily seen by his whole army and given that it is there to show who’s side God was actually on, its loss will immediately trigger a morale test for the whole army, with a detrimental +/- depending on the rules used. 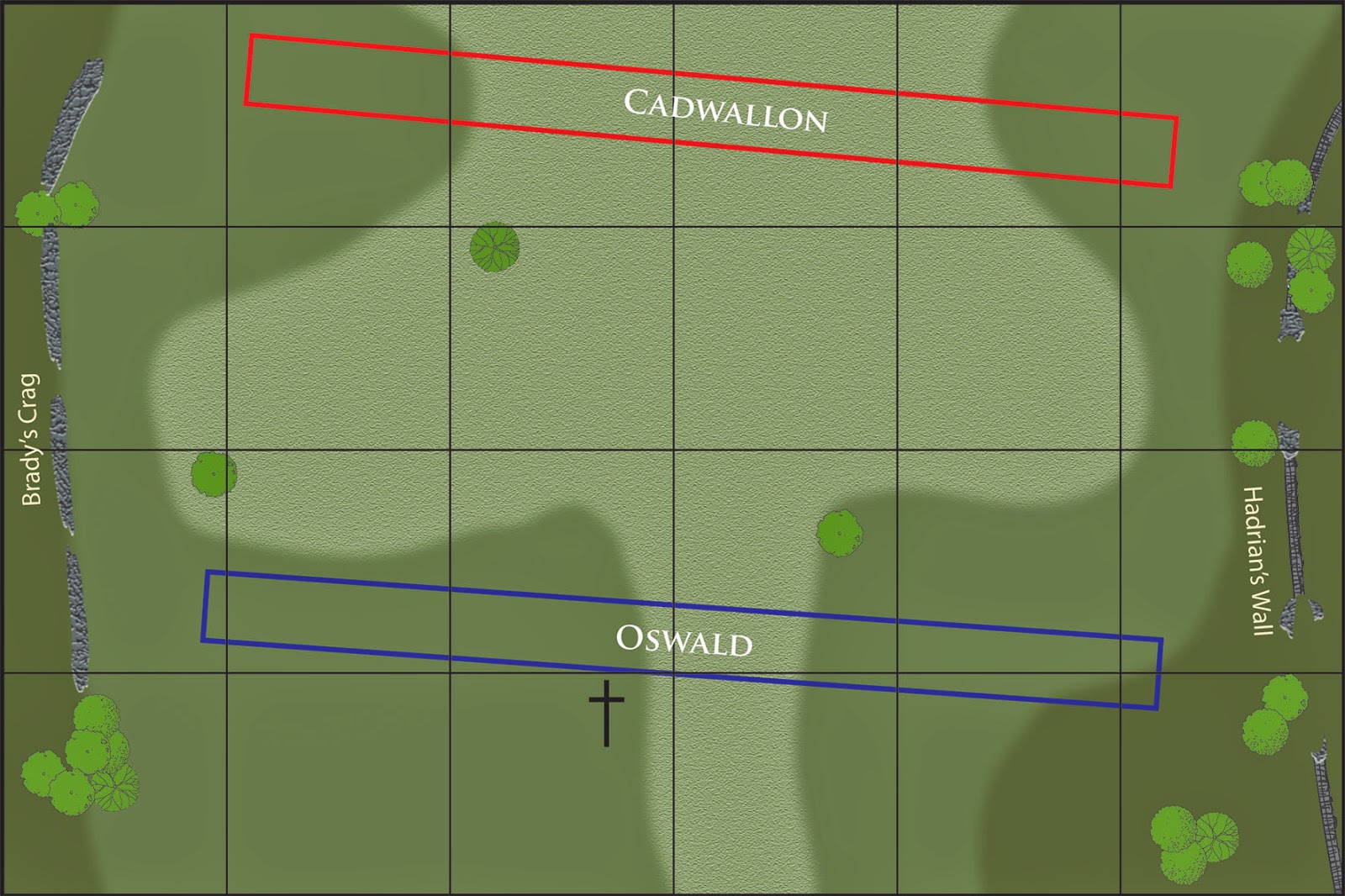