Club night and first time back in about four weeks, most of the members were not turning up and I only managed to get a game at the last minute as Stuart volunteered, so we chose Chain of Command as I felt like getting back to WWII for a change.

It was early war Germans vs French, the former were attacking while the latter tried to delay, as it turned out I only got 9 support points which was one more than the French due to the discrepancy between the forces, not a good start for an attacker. Also the French patrol markers start a decent way in while the Germans start right on the opposite edge, this again put me at a disadvantage as I had to get all the way to the other side and capture a Jump Off Point, you can see where this is going.

I took a pre-game barrage, Shabby Nazi Trick, an extra command die and an infantry gun as my supports, Stuart took a 60mm mortar and an anti-tank gun. As the French started the game with one squad and the mortar on the table I took advantage of an excellent roll to bring almost all my troops on leaving one squad in reserve, I thought with the barrage I would get close to the enemy before he could build up a decent defence. The barrage turned out to be a waste of two points as it only stopped one unit arriving and only once. My Fifth Columnist managed to grab a turn for me by stopping a Senior Leader from commanding his men, but thereafter he was ignored, the gun I hear you ask, well the Frogs landed a big puff of smoke right next to it and so I had to wait a bit and move it, plan A had been well and truly sunk. 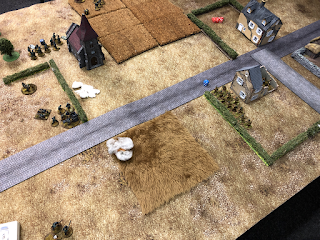 My guys slowly advanced but casualties began to climb, when caught in the open do you go to ground or do you continue to fire while you have a decent amount of men left and hope to cut down the fire coming at you, I went for the latter and threw everything I could at the enemy on my right, but it was slow work as the French squads are very big and I was not actually killing anyone merely putting shock on them and a lot of that was needed.
As the firefight progressed my officers and NCO's took a pounding and working with only 9 points of Force Morale (I actually got 8 but we added one to make the game last, mmm), I quite quickly lost cohesion and was reduced to one. I think I got Stuart down from twelve to five or six but it was not enough, again the reduction was mainly due to officers falling. So there you have it, a dreadful effort by my boys, Stuart had his moments mid game but as the defender he could afford them better. My barrage and infantry gun were both a complete waste of points.

Chain of Command does not lend itself to pick up games unless you build your own scenario and use higher Force Morale and have more support points, it really does work far better with a mini campaign. Anyway, well done Stuart for the game and a spirited defence.

Well and truly rested I am now chasing my tail, map projects have poured in over the holiday and I got another just as I was closing up tonight, some are needed sooner rather than later so I am busy. I have taken a receipt of several books recently to give myself a grounding in the nitty gritty of the Italian Wars. I have also finished my first pike block and some arquebusiers to defend it, I am now on to a second Swiss block in French service which can be added to the first to give one large block or two smaller ones. I have one more unit of handgunners and six Gendarmes waiting in the wings after this. I am getting quite carried away with this project and am thoroughly enjoying painting the figures, I now have twenty Contrast paints which again I have really enjoyed using. 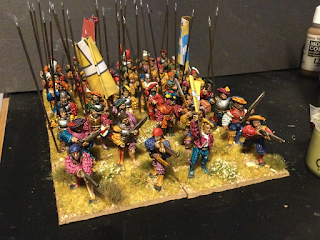 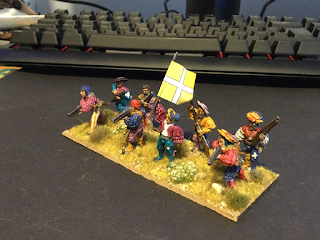 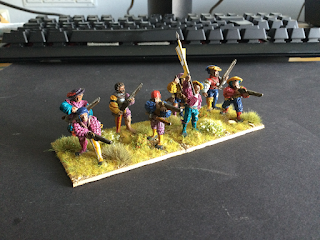 With my output being quite steady I had to order more RUB's for the upcoming troops, I would be lost without these. 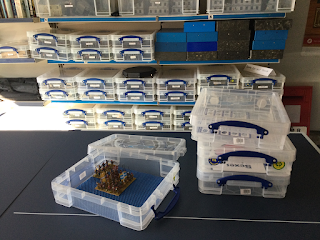 Right, that is it for now, I must get on and get an hour's painting in before I sit down to read.

I'm back. My son booked an AirBnB in Catania, Sicily for just under three weeks and opined I should join him for a weekend, so after some deliberations I decided a week would be better. I traveled down to his place on the train as we were flying from Luton Airport, people of a certain age will smile at those words.

The traveling all went like clockwork and getting through the airport which was not busy was very quick, despite the horrors you might have seen on TV back in the day about EasyJet if you follow the rules it is a painless and efficient way to travel. I did have to wear a mask on the flight which I did not enjoy, I am a mask denier, if you bought a drink you could sit it on your tray and fly maskless, so what's the point.

Sicily was beautiful and sunny when we landed and lovely and warm, the 'flat' was huge and could take eight people so we had plenty of room, it was bright and clean and only a 20 minute walk from the centre of town. There is not a lot to see in Catania apart from the architecture and the beautiful churches which seem to be around every corner, but it is nice to sit outside with a cold drink or food and watch the world go by. Although of course you can be accosted by some African chappie hung with trinkets, sparkly balloons and nik naks whose opening remark "Are you from Senegal" was obviously way off the mark.

Our food was a bit hit and miss, fish is a big thing in Catania but we did not do well there with bad service and indifferent meals, I did however have a few nice local dishes along with the best pizza I have had in my life and a first class steak to finish my week off, not as good as in Florence but a vegan's nightmare. I did not do so well with drinks, not many establishments served zero alcohol beer, in fact you can get zero Moretti and Peroni in Tesco but it is a struggle in Italy, which I found strange as all the big continental beer brewers do a zero choice now. Anyway I suffered with real beer and an excellent Sicilian red with the steak. 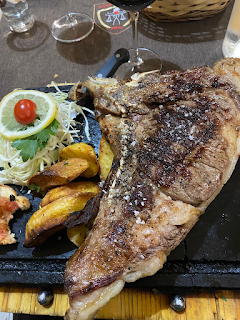 We made a trip to Syracuse, mainly because it was Syracuse and I had visions of a Greek and Roman city, I was disappointed because the old city is now under the new one, like Catania. We did visit the archaeological park where there was a collection of ruins and then wandered the ancient streets and had a nice meal before returning to HQ.


Covid played next to no part in the trip, we were not asked for paperwork or tested on arrival, you only had to wear masks inside but this lunacy disappeared once you had walked ten feet and sat at your table amongst forty or fifty other people in close proximity, only twice did we eat inside and have to show our NHS pass. For me to have all your travel documents on your phone was a novelty, presenting such to a scanner does make life so much easier.

With my week up I headed home, a long day ending with a numb backside, I do have to say that once again everything went like clockwork and I got all my connections without a bit of bother.

So, what now, well I had to go into the PO yesterday morning as the missus had to go out and apart from my memory it seemed like I had never been away, but I had and had a slight tan to prove it. No one who came in had missed me and seemed nonplussed when welcomed with "Buongiorno." I had some new figures waiting for me, the next pike block and some cavalry, and I managed to get back to the unit of handgunners I started before I left. So, onwards and upwards.

Before I forget, if you are looking for something to watch, try Clickbait, Netflix I think, a superb piece of storytelling and you will decide half a dozen times who done it before you find out you are wrong. 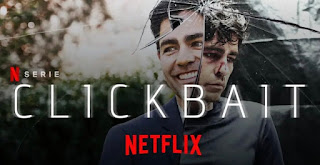