This week was Wings of War week and it was up to me to get off my backside and sort something out. We were going to have six players so I thought a bit of a competition, each player would get his choice of two aircraft, this was 1918 so all the stuff was first class, on choosing his two aircraft the player would get a die roll for each to see if the pilot had an ace ability, on a 5 or 6 he did and he got to pick from the ace abilities card deck. The players would get two points for shooting down an enemy, minus one for each plane they lost and a whopping five points if they brought the balloon down.

I jazzed things up a bit by offering both Richthofen brothers with ace abilities as standard in triplanes and giving the British two Bristol fighters, these planes have not been used before so they were getting their first run out.

Unfortunately due to circumstances beyond my control we had four players rather than six, which was a shame as I would have liked to have seen the skies buzzing with aircraft, but we all get caught out at times. Maybe later we can try it again.

I was German and choose two lovely Fokker DVIII's while Ryan (Ryan Air .... come on) took two Siemans Schukert DIII's, for the RAF Andy had two SE5a's and Simon took the Bristols. Both sides headed towards the opponents balloon, well we all did but Ryan seemed to be taking the long way round. After the first pass I decided to send one of my planes back to defend our balloon, Simon had the same idea but brought both of his back, this left my one DVIII on his own but he gallantly pursued his mission and soon was pumping the dirigible full of lead. Meanwhile Ryan and Andy got caught up in some desperate dogfighting around the German balloon. 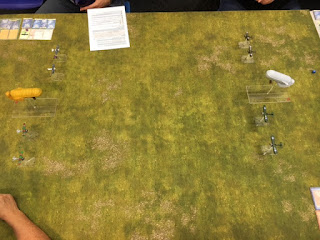 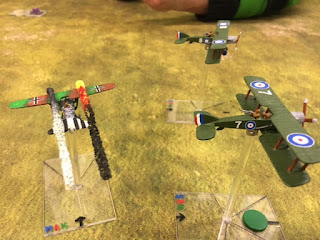 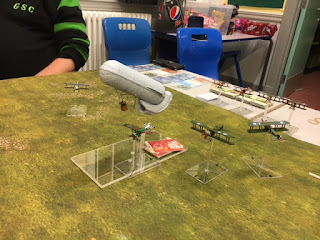 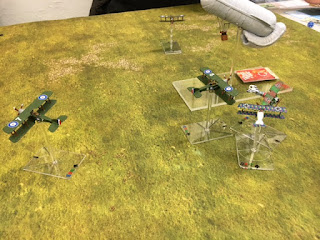 I lost the first aircraft, my Ace was struggling with a wound while his engine smoked and belched flames, he couldn't fight off two Bristol fighters and down he went in a fiery ball. I decided to bring on Richthofen, although it was a black triplane as the original lost its magnet while unpacking. Andy lost an SE5 and brought on a Camel as replacement, somewhere in the maelstrom Ryan also lost one of his. All this time I kept plugging away at the balloon with my remaining DVIII, the damage cards were piling up on it while my pilot dodged death for a long time, sadly though he too spiralled earthwards. The triplane arrived to help but he didn't last long, there seemed to be something wrong with our bloody planes today, or something like that. I took a Fokker DVII for my last choice, as had Ryan and we both sped towards the badly damaged British balloon, the one I had badly damaged may I add and suffered while doing it. In came a red nosed Fokker, a quick burst and five points to Ryan Air. 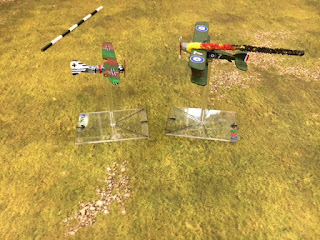 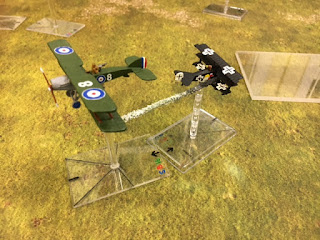 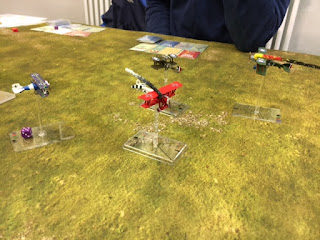 So according to the victory conditions we had won, but alas there was fifteen minutes to go and Simon was closing on our balloon while Andy fought off what was left of the German defenders, my fingers were crossed under the table. Although Simon got a shot in at the balloon, it still had one point left, but that was rendered useless by the fact it burst into flames, thereby ensuring it would not survive. So both sides had managed to destroy each others balloon but Simon ended with twelve points and Ryan with ten, Andy had very little but at least he didn't have a minus score like me.

A good game but I would like to try it with more players at some point. Elsewhere we had a boardgame and a large Frostgrave game.

I have almost finished the Carolingian cavalry, I will give them some shading tonight and then have them varnished and ready for the weekend. I have a few small projects of my own to get sorted out and will also have to get the organisation for the new army done so that I know what I am looking at. Doing some Bolt Action at the weekend, looking forward to that.
Posted by George Anderson at 21:42