Soldiers of the Queen

Another lazy night at the club for me, Rob brought along his extensive Sudan collection for a Black Powder game, not a fan of the rules but I will eat my hat as they work fine for this and we always have a tense game. My default setting here is British and Jocks, no Johnny Foreigner for me, which is just as well as I was put in charge of the 'Highland' Brigade on the British left flank.

The scenario involved an Egyptian army dug in along a wadi protecting a small village and oasis, the Imperialists had a mix, the Jocks then a French brigade and lastly an 'Indian' brigade, the deployed in that order, me on the left, the Frenchies in the centre and the Indians on the right.

To take advantage of my excellent troops I quickly formed line and advanced as fast as I could, this left my artillery behind or without a clear line of sight but it couldn't be helped. Once at close range I opened up with my Royal Marine marksmen, a misnomer as it turned out, throughout the game these crack shooters caused one casualty and eventually simply retired having given up trying. The Scots on the other hand were brilliant, I did lose the Highland Light Infantry as they recoiled from an attempt to charge the wadi, however the Black Watch made up for it and stormed in routing their opposite numbers. 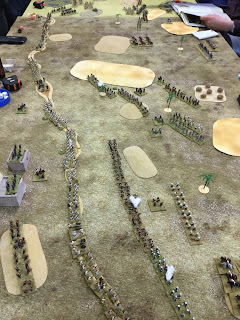 The Seaforths now took their turn and once again to the skirl of bagpipes the brave lads grabbed more of the wadi, albeit the Black Watch helped with this attack catching the Egyptians in the flank. A hole had opened up which would allow the French to pour through and rout the remaining enemy unit holding this part of the wadi, get intae them shouted the Jocks. Despite this urging the blighters simply marched up and took station behind my hard fighting troops in the wadi! Elsewhere the gaily caparisoned continentals were having a hard time closing with the enemy, 'whit are they up tae' thought my boys. Away over on the right flank the Indians were holding their own against several assaults by Egyptian infantry, cavalry and camelry, the British cavalry on this flank turned in a wonderful performance and threw back several enemy units causing them to eventually head for Cairo. As night fell and the Royal Marines rallied back the Black Watch took more of the Wadi while some of their French allies headed for the rear hastened by the jeers of derision from my troops. 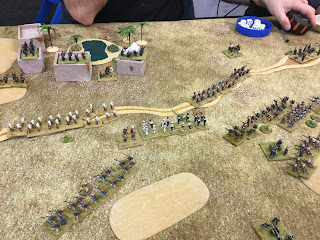 Another good game and plenty of excitement, it was noted that the dice gods were being particularly favourable to me last night, something which I enjoyed as I threw my troops in with abandon against the enemy. Although the battle was declared for the Allies there was still a way to go to get the Egyptians to relinquish the village and oasis, we would have had to regroup for this but I think we would have managed in the end.

Elsewhere we had a Bloodbowl game, a boardgame and a Chain of Command 1941 Eastern Front game. I kept my eye on the latter and it seemed that it took nearly three hours to move one German squad from a bit of rough ground, everything else was basically in the same places they had been at the start.

Tomorrow I have a War and Conquest game and next week we take to the skies over the Western Front. I caught this on Facebook  https://www.youtube.com/watch?v=croWDsDhgPo I have never seen this guy before, Lindybeige is his name, and although I may not agree with his ideas they were excellently put forward and gave me a new way to look at an old problem. I grabbed a cuppa later in the night and watched more of his videos, very entertaining and some are thought provoking, give him a try if you have ten or twenty minutes spare.
Posted by George Anderson at 14:43