Yes, dismal again, just like my mood at the moment. Were you among the small number in the country who enjoyed the tropical heatwave of BBQ weather yesterday before the hurricane hits, did you lounge in the area warmer than Istanbul, how do these people still have jobs at the end of the month. I have deliberately lay in a bit more than usual today as I have no plans whatsoever and the highlight of my day will be a nice fried breakfast in an hour or so, but it is early yet.

At sometime during this morning I passed 200,000 hits on here, I am quite chuffed with that, this blog managed to scratch my writing itch once I gave up on the Wargame magazines and my cartography took up the spare time which a declining customer base in the Post Office gave me. My co-author has mooted a new flag booklet for the Confederate Army of Tennessee at some point, but otherwise I shall stay with the blog.

The public don't want it, doctors don't want it, politicians don't want it, almost nobody wants it, what am I? I am an imposition on your privacy which you will be asked on a visit to any NHS outlet near you from 2019, you will be asked your sexual preferences, yes you can say no but there is a tick box for that as well, but not one for 'what the hell has this to do with my ingrown toe nail.' Oh, who does want it, the LGBT Foundation lobby group in Manchester, who are obviously out of touch as you can now add another fifteen letters to that, but the NHS are using their Joker, sorry, white flag on this one.


Another surrender involves a trader in Loughborough who has been banned from the market in case her wares bring back memories of the Crusades which may upset a certain part of our population, do we have a lot of Saracens here, she sells mugs and bric a brac with Knights Templar themes. Now considering the vast majority of the public have such a grasp of history that they think Winston Churchill is a dog mascot selling insurance they might be a tad premature with this one. They didn't ban her when her mugs etc. showed Nazi memorabilia, go figure. 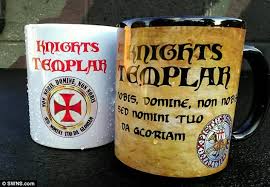 I read last week that we were preparing our plans for going to war with North Korea in the event the Americans pull our lead. Yes, the badly coiffured leader of that country is a nut, but what have the North Korean's ever done to us? Couldn't we just sit around the table and ask him if he seriously thinks anyone would want his country and just whom is he 'defending' it from. Besides, how stupid would it be to send an aircraft carrier with no planes and hardly enough surface ships to provide proper anti-submarine and anti-air cover to protect it.

And while we are on about the RN, not the one I was in of course it was different back then, who would have thought a woman on a submarine would have an affair with one of the officers, well just about everyone who didn't think putting women on ships and submarines was appropriate to be honest. Now we have the prospect of one of our nuclear submarines 'striking' because of some hanky panky in the wardroom, and when were matelots allowed to strike? More than one person being bolshie together could be considered mutiny in my day.

And anyway what 'special' relationship do we have with the US, it seems to have come as a shock to our ruling class that we are no more thought of, and perhaps less thought of than Papua New Guinea etc. Yes Ronnie Reagan had a soft spot for us but Obama's first act on moving in to the White House was to ditch Churchill's (the man, not the dog) statue, the defence rests M'lud.


I don't leave many reviews on TripAdvisor, I could count them on one hand, I sometimes say we will have to but I then don't get around to it, but in exceptional circumstances I will. If I had paid £38 for two nights at a hotel in Blackpool to 'celebrate' my wedding anniversary and it was really bad I would keep my mouth shut. The £19 a night price tag tells you you are not going to have your bed turned down and a Ferrerro Roche on the pillow, so why you would go to the newspapers and crow about it is beyond me.