An NCO and a Gentleman OBE

As I was lying reading 'Normandy 44' by James Holland last night a name came up which I had heard before, Ken Tout, whose book of being a tank crewman during WWII I had heard was a great read and a classsic. I went on to Amazon to see if the book was still available and popped Ken's name in the Search, several books came up and one popped out at me 'How Modest are the Bravest', I suddenly realised I had drawn the maps for that book at the end of last year. I had conversed with Ken, albeit by email, not realising who he was, a real Normandy veteran, Ken is still writing at 95! I feel honoured to have drawn the maps for his book, thankfully he was very happy with my efforts.

I have enjoyed Holland's book so much that I spent my Fathers Day book token today on two more of his books, I had wanted 'Burma 44' but am happy enough with what I got, I can wait for Burma. I can thoroughly recommend his Normandy book. A few years back I drew the maps for the release in English of 'A Combat History of the 21st Panzer Division' the maps came in a separate booklet, the same thing is going to happen with 'Bloody Streets: Battle for Berlin' later this year. I decided therefore to get myself a copy, I don't buy all the books I draw for, the missus wouldn't let me and I would need an extension anyway. So I looked up the 21st Panzer book and was shocked to see it retailing at £300+ for the hardback new on Amazon, I was crestfallen to say the least, I should have got one when it came out. Missus A to the rescue, she tracked down a copy for £65, I have paid for it but would have expected it by now, the sale has gone through so I will just have to be patient. 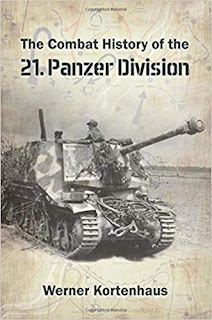 While in Kendal looking at books I also popped in to Games Workshop, unless you have been hiding under a rock lately you will have heard of the new Contrast paints, I have watched videos of them in action and thought I might have some use for them although I am an average painter and not an expert. My main thought was that they would be good for white French uniforms and I wouldn't have to make up a light grey wash which never seemed to look right. So I got one suitable for white, decided to also try red and treated myself to the old favourite Snakebite Leather. I also thought they might be good for horses but forgot all about that and did not get anything to try. As usual the guy in the shop was more than helpful and I chatted for a good fifteen minutes with him. I am looking forward to trying these out. 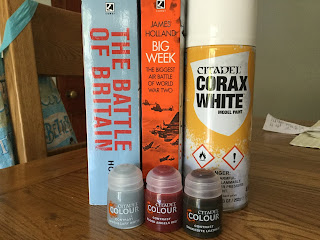 Posted by George Anderson at 16:48