While the rest of Britain, from the Midlands south, basks in the hottest summer since Rorke's Drift oop here in't North it is grey, windy and on occasion rain falls, so what better to do than take in a wargame show, especially as the Morecambe Kite Festival of yesterday robbed me of two hours of my life.

Phoenix is only 45 minutes away at the Rheged Centre in Cumbria, a strange kind of place which holds all sorts of events and has a cinema, a grass roof and a very strange car park, I think it is supposed to be environmentally friendly but it confuses me, I am never sure which part I am in. This is very much a local show albeit some big names were there, Sarissa, Warlord and Colonel Bill's, the rest of the traders were much smaller outfits but there was a decent range of products if not huge. There was a small but brisk bring and buy where you buy a space and some time and then showcase your wares, most of this was GW stuff which seems to be very popular in these here parts. I thought GW and Victrix from Kendal would have been here but they were not. So for a local show not a bad turn out from traders.

Now the games, there were a few participation games, an ACW Rebels and Patriots with some very nice terrain and figures and a coastal naval game, not Cruel Seas which also had some lovely models involved. I think there was also a fantasy table of some sorts but that would be it. One of my reasons for popping along was that there was a Seven Years War game advertised, this turned out to be based on the British in India, the figures were 28mm and very nice, the terrain did not do justice to them as it was uninspiring, but maybe this is what it was. I eventually managed to ask someone who the manufacturer of some of the figures was but the gent did not know, others looked on frightened it seemed that I would ask them. I could return later when the owner was back, I said I would. Half an hour later I did get a word with the owner but it was a quick one and he then turned his back on me to converse with some other guys. I did get a good talk with the ACW guy and especially Jim from the Dumfries club who was running the naval game. I hate to say it but the 'game' side of things was not great, I feel a bit guilty saying that as we have a club 45 minutes away and no presence. 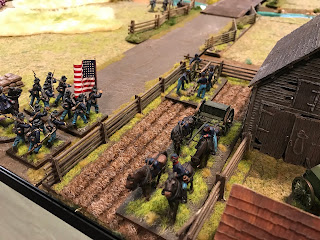 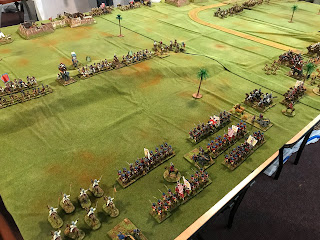 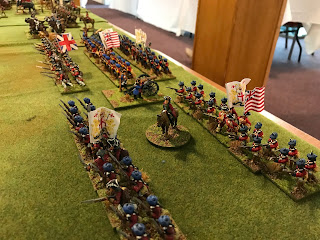 Yes I did buy some stuff, I got some blue Contrast paints, some battlefield bits from Colonel Bill and a few paintbrushes from ABC Brushes. I usually buy the horrendously expensive Winsor and Newton brushes but have found recently that some have not been up to scratch, I think they will be my last, I used ProArte years ago and I think I am going back there. 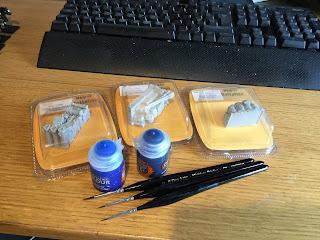 I also ran into David Bickley (Tales from GHQ) and Phil Robinson (News from the Front) up here on their hols and taking some time to bag a wargame show before heading home
Posted by George Anderson at 15:39