Yesterday was a good day for me, a splendid D-Day, our veterans were rightfully commemorated, and I got some new stuff. Isn't it a great joy to get a parcel in the post filled with hobby goodness, to fight through the armoured tape and eventually get your hands on the contents. I love it.

Warlord played a stormer and I got my D-Day book on 6th June, it is a very heavy tome, it is chock full of pictures, information, new theatre lists and scenarios. I got the book not because I am going to leap straight into beach and airborne landings but just as one of those 'in case' books, the way we used to collect rules until they got too expensive. I have already expressed my doubts about some of the lists but will get a better look later, to be honest I have also still to digest the Budapest book in detail. I am dubious about what seems to me an attempt to turn WWII into a version of 40K with all the different takes on a simple infantry squad, maybe I am wrong, we will see. 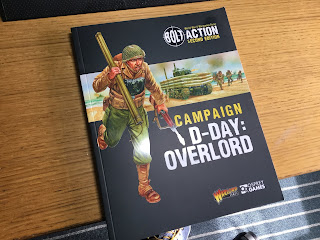 Rob is supposed to be running a D-Day themed game at the club on Tuesday, I can field enough vehicles for a German reconnaissance force but just felt something was missing. I had an idea to add a heavy armoured car to 2nd Panzer and this gave me the excuse not to wait. I ordered a Blitzkrieg model Sdkfz 231 from Great Escape Games on Wednesday morning and it arrived Thursday lunchtime, amazing turn around. It is not a kit but a resin model, as far as I know there is no kit for this vehicle at the moment, so I was stuck. The car is very nice and my only complaint which is minor to be honest is that the finish is not quite as smooth as it should be on the upper deck for some reason and when primed you can see very minute ridge lines.

I put magnets on the turret and body as it was too loose otherwise, I also added an aerial. I had the machine primed, base coated and camouflaged before going to bed, I used a sponge for the camo pattern. This morning I put on the decals, on these vehicles this is usually only the number plates, occasionally you see a national cross, it would seem crews gave their cars names as well, I am still thinking about this. 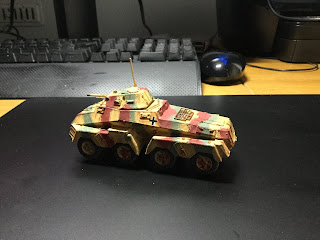 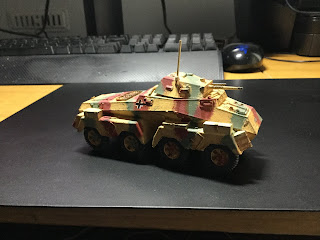 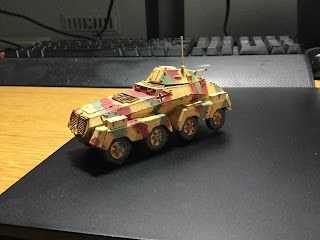 So there you have it, someone complained recently that there was too much German war material available to the detriment of the Allies, and for some reason he was jumped on and howled at for suggesting such a thing and told the Germans in fact needed more!

The French are almost there then I have to buy more!

Posted by George Anderson at 11:23