Now you see me, now you don't

My tinkering with my WWII collection continues, I have always wanted to put some foliage on my vehicles, especially the Germans as they needed to hide from the Jabo's during the day. My first attempts used a kind of rubberised stuff, not sure what it was, I think I got it off some old trees I had lying about, sprinkled with flock it seemed to work but I knew it didn't. I turned back to this problem and tried the same trick with lichen, it looked fine but again I knew it wouldn't do.

I then came across a guy showing off a tank on Facebook (damn you Zuckerberg) and it looked the very dab, I asked him what he used but before he answered I did some surfing and came up with Scrim Foliage from 4Ground. This was the stuff as it turned out, it comes in Spring, Summer, Lush Hues and Autumn, you get a small blanket(?) of the stuff in a blister pack, don't be put off by the size you can make it go a long way, it comes in at around £4 depending on where you get it.

I wanted Summer as my forces are for the summer of '44, needless to say most summer foliage was out of stock and I wasn't sure about Lush Hues, I did eventually manage to track down a Summer blister from Great Escape Games and got it within 24hrs. With my usual impatience I set to on several Wehrmacht vehicles, I cut small sections from the blanket and then teased them out, decided where they were going and gave the area a few blobs of PVA before pressing on the foliage, simples. I think it looks great. As you work with it lots of 'leaves' fall off, don't throw these away, if you have lichen or some other stuff on earlier vehicles, give it a brush of PVA and sprinkle the leaves on, far better than flock. I have done this with lichen on the bonnet of the 251 in the middle. 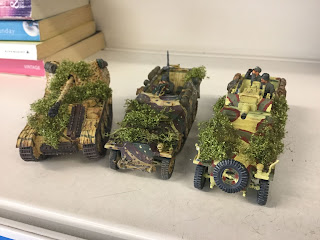 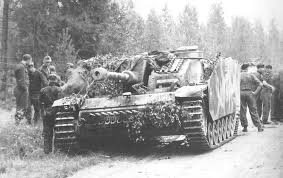 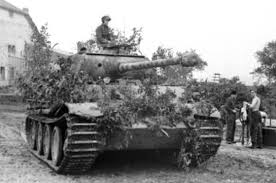 I have looked at some early reviews of the new Warlord D-Day campaign book, needless to say it is being praised although the new theatre lists may not be suitable for tournament play unless toned down. I try and be as historical as I can when playing Bolt Action and a couple of the things highlighted from the new book have me shaking my head. The British and maybe the Americans are allowed naval gunfire support, at this scale that must tip the advantage to the Allies. There is a new squad for the Germans which has up to two LMG's, four panzerfausts and most of the men armed with SMG's, complete fantasy when almost all the initial defenders in Normandy were second or third rate units lacking almost everything including training. I have yet to see the book myself although I have it on pre-order but it is going to be interesting. I have also noticed the upsurge of German units from manufacturers running about with StG 44 assault rifles, they were not used in Normandy, many were issued to newly raised Volksgrenadier divisions later in '44 but generally these did not make their way in large numbers to 'normal' infantry units. It's like making a night attack and running into that one Panther with the infra red capability, tosh.

Posted by George Anderson at 13:22