A cool evening last night for the club but I still braved the weather in my shorts, too lazy to change. After being all campaigned out with Bolt Action I decided to drop the first campaign and instead learn from the second. There are things which were wrong and having now fought five games I think I need to use the Patrol Phase from Chain of Command, although I do not like CoC this part has always seemed like a good idea. So instead of a campaign game I took along the Cowboys.

A simple shoot out was on the cards, the back story being two mining outfits are at each others throats and one decides to hijack the others latest consignment of gold on its way to the Wells Fargo office, as the escorted wagon arrives in town the boys in Rogan's Bar get all het up and decide to throw down on Main Street. 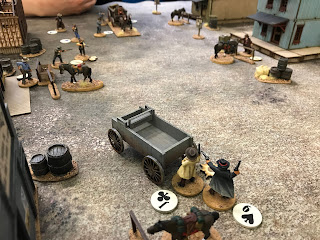 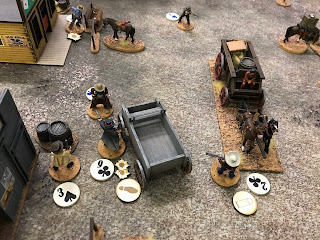 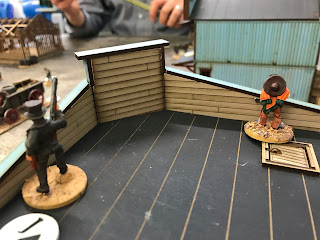 As the Newby Co. men move along the street two Anderson men climb on to the roof of Rogan's and open fire, all hell then breaks loose as the rest of the Anderson men exit the bar the better to take down their opponents. The Newby men are almost all armed with repeating rifles but the Anderson men close the range to negate this, neither side wants to withdraw but neither can manage any kills. Things get more ferocious as the pistoleers close in and the men on the roof find their range, several Newby men hit the dirt. Things turn around very quickly and it is the turn of the Anderson boys to eat lead. With both gangs having lost more than half of their numbers incredibly each side decides to back off and call it a day. This is a shame as the wagon had actually driven through the mayhem and made it to the Wells Fargo Office, but the driver alone could not unload, should the Anderson men have retained the ground they could also have picked up the gold, but no, that would have been asking too much of Fate.

A great little game and a lot of action, I was doing very well right up until the last minute when Simon evened up the losses and we both lost out morale checks. So the way things are going a draw is a triumph for me.

Elsewhere Rob, Andy and Patrick were involved in an AWI 15mm game which looked very good, Julian and Ryan still in beautiful fantasy land, X-Wing and a boardgame were also in evidence. I have another Saga game next week so no doubt I will be back in the doldrums although I think I am using the Saxons rather than the useless Byzantines. 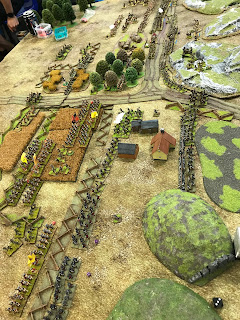 I have managed to get a hardback copy of the Combat History of the 21st Panzer Division for which I drew the maps for back in 2014, it was a hefty price but nothing like the ludicrous cost on Amazon. It is a heavy tome with everything you wanted to know about the new, reconstituted armoured division but were afraid to ask. Looking at the maps now I would do them different as I have learned a lot since then and the map book to accompany 'Bloody Streets' later in the year will reflect this. 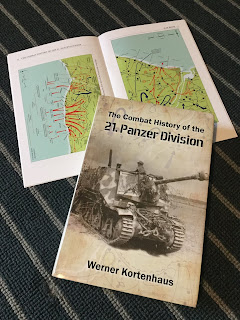 I have received two more artillery pieces for my SYW armies, one Front Rank and one Eagle Miniatures, both are nice but the latter is the best, I think I got the former gun as they have a different 6lb gun from Eagle and wanted a change, they give you two barrels for the gun, one which I suspect is a howitzer, I shall have to email them. Anyway these are up next and will complete the forces for my first game. I have also got a couple of SYW MDF buildings for a  small farm (built up area) from Warbases, not sure about these but I need a couple for the game and these will have to do for now. 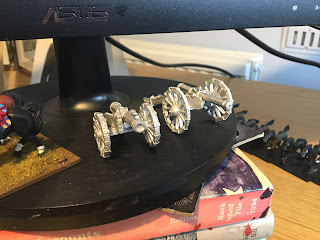 Posted by George Anderson at 12:04