It Can't be the Dice

Saga campaign game again at the club, one of my two defending games, Saxons had invaded the empire and I had to sort them out, they had obviously heard of the fabled wealth of Byzantium and came to grab their share.

Once the preliminaries were out of the way we had five turns to play, in a line I had Hearthguard, Warriors, Warlord, Hearthguard and archers, I cannot not take archers as far as I know, I had decided this time to plonk them in some terrain which helped their defence if attacked. The Saxons (Dan) put most of his men on my left and at when it looked like his hearthguard might suffer from some archery (yeah right) he turned these towards his right as well. So I moved the archers forward as you would do, but this was a mistake, back came the Hearthguard at the trot and smashed into the archers, shades of Manzikert again.

But this time the archers did not die in droves, well they did but enough remained to fall back, this opened up some opportunities for me, I ran my cavalry into the Saxon Hearthguard and killed all but one, who legged it, on my left I threw more cavalry into the Saxon Levy. Now with elite Byzantine heavy cavalry coming at them these should have been a mere speed bump, but no, they managed to survive in large numbers and fell back, leaving my cavalry open to being shot to death next turn. Surely having been beaten by cavalry these guys would have ran as fast as they could, not merely dawdle back and prepare a killing storm in the next turn, but, it is Saga not history.


Shortly after this I had another chance to wipe out the one remaining Hearthguard and take a control dice off the Saxons, a miserable dice throw ruined this perfect opportunity. I had shot my bolt, the Saxons recovered and I was left with all my units but with only one or two men in each. The game ended and I had narrowly lost although looking at the table is seemed to be a mini Manzikert. I felt I had a slightly better grasp of the game but I get caught out by how many initiatives you can give one unit and hence how far it can travel, one minute it looks safe next you are getting hammered. Low grade javelinmen in numbers seem to be the way forward, to hell with bows, or is it just me.

My third British cavalry squadron is complete, the 4th Horse later the 7th Dragoon Guards, I enjoyed painting these and have now jumped right in with the second squadron for the French Apchon Dragoons. I am almost there for the forces I want to play one of the Honours of War scenarios, I ordered up two more cannon, one for each side so the artillery is also now covered. This leaves a couple of built up areas and I still cannot decide on which buildings to get, one possible set are MDF and a decent price, the other is resin and far more expensive, I cannot leave the decision much longer. 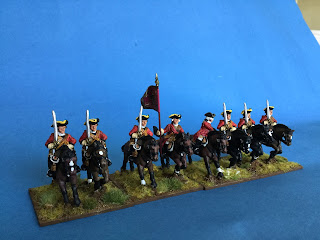 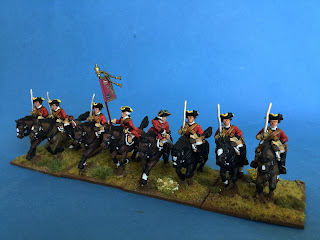 I got two pots of contrast blue paint at Phoenix last week, the light blue is Talassar and the other Ultramarine, I applied them to two spare figures with a white undercoat, I think they would have been better with grey. I will get a chance to try them out in the coming months once I get back on to painting more SYW infantry, I am already sold on the red. 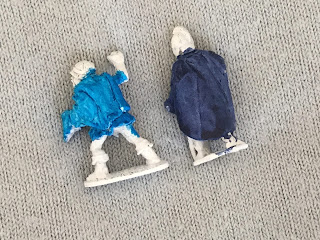 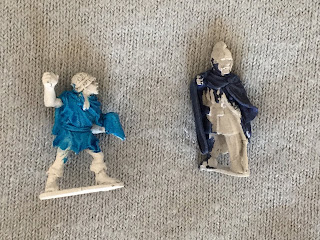 Posted by George Anderson at 19:03