Some of you out there are going to roll your eyes to the heavens in a mo, I am thinking of giving Chain of Command another shot, there I have said it. Why, well I am not sure, I watched a couple of videos the other night and what went on looked a lot easier and less horrendous than all my other attempts to like this game. Now I could just have been utterly useless and stunned by my previous attempts and I will admit to not being the best WWII player around, but I am a wargamer of some experience and the situations I found myself in were terrible and not a lot of fun. They were also multiplayer games and like Bolt Action at the end of the day these are designed for 1v1 play, maybe that was a problem, maybe not.

I also cannot get away from the fact that I think the Patrol Phase is one of the best mechanisms I have ever not used, in fact I am surprised it has not been adapted for other periods, maybe with a bit of tweaking but it must have potential. When, now I have to read the rules first then either sort out an opponent or give it a solo trial, we will see.

I also think I now have enough troops to fight one of the scenarios from the Honours of War rulebook, again not sure whether this will be a solo run or against a human being, maybe even a run through at the club. I have just finished the second squadron of the Apchon Dragoons and am now half way through two artillery pieces for each side. I found out what the second gun barrel was on the Front Rank model, it would seem the 6lb cannon had two barrels one fired a more powerful shot at short range thus they were changed for use, I should have wrote it down. 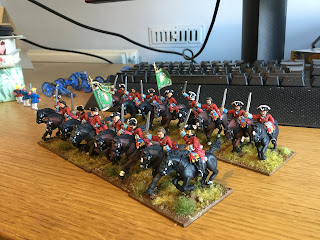 I have several little projects to complete at the moment, some terrain scatter for both the SYW and WWII, not a lot but the odd piece. I have also built a couple of buildings and a small cart to provide a 'built up area' for the SYW, this will be a farm, I am not convinced I shall need a huge town for my games so will probably keep things rural. These are from Warbases Prussian range. 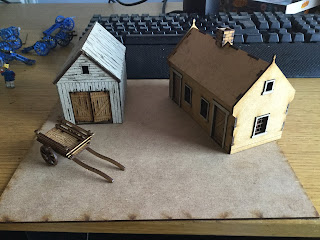 I have had a bad attack of Wargamers OCD lately, when finishing the Apchon second squadron I realised I had not painted the shoulder tab on the first squadron, so I brought them up this afternoon and sorted it, I am sure they will repay me with courage and fortitude on the field of battle. The next was my artillery, having picked up the rules again for a quick look the author recommended not gluing the carriages down so that when a crew ran the gun was left behind, this seemed eminently sensible so I pried the artillery off their bases, repaired them and now all my guns and crews are separate. I am not out of the woods yet, one of the British squadrons has a flag which the spray varnish has diminished and although I tried to wash it off I know it is not right, and I have another flag in the drawer, so that will be next so that I can sleep peacefully of an evening. 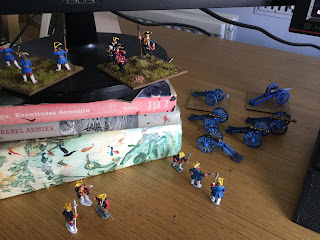 What else, well I have a shed full of WWII stowage heading my way so most of my vehicles will be getting another facelift, I am even toying with the idea of getting some tank riders and putting the odd one or two on the tanks instead of covering a tank with a whole squad.

Oh, I have used the blue Contrast paints on the artillery crews for the new guns, they have to be used with the grey undercoat, this changes them completely from the horrible white examples. For my purposes they do not save me time but I will use them again now. These guys are not completely ready yet but you can see them at the bottom of the picture above.
Posted by George Anderson at 20:37