I am not superstitious but I am beginning to wonder when my inherent military genius will enable me to climb out of the trench of defeat or at best a draw. I was humbled at the weekend at Risk by Mrs A jubilantly conquering Australia, South America, Africa etc. and leaving me with a ragged rearguard in Kamchatka, a Scotswoman quite happy to put the boot into a man who is down and she is from the genteel side of the country. 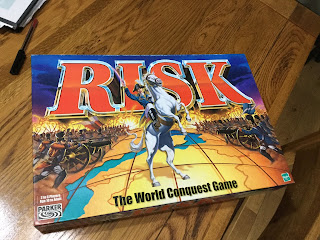 No matter, I have completed the next of my SYW troops, another battery each for the French and British, I got a Front Rank piece but in future I will stick with Eagle Miniatures as they are very nice castings, I also got a small ammunition wagon for a small vignette and it will be primed today. I am a bit stuck for artillery crews because they will obviously all begin to look the same as I only use Front Rank at the moment, I shall have to use some ingenuity if I can find some. Foundry are too big and others are too small while other SYW manufacturers simply do not do gunners. I did look at Perry but their gunners are in a completely different uniform, no matter it will be a bit before I get back to artillery. I have tried without success really to lighten the blue on the British carriages so have bought a grey/blue for the next lot. 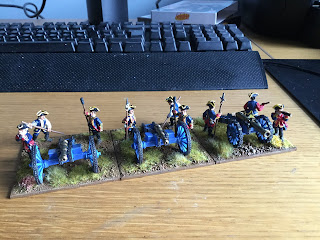 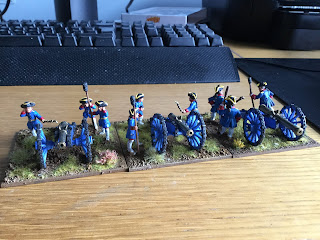 I have also completed my little farmstead buildings, they turned out very presentable, I used Charlie Foxtrot tiles on the roof of the farmhouse, before I base them I have to do some scatter, barrels, boxes, sacks etc. so a wee while yet before they are complete. 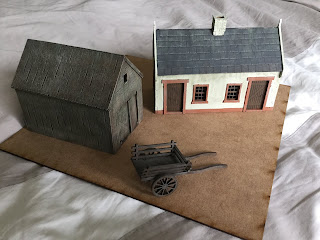 I don't have any urgent map projects on the go at the moment so I spent Friday afternoon sorting out some markers for Chain of Command, I had plenty of 40mm round bases, some people have a lead mountain, I have an MDF mountain. I originally looked online for something to buy then thought I could do better and make them more personal, so I chose division signs used in Normandy as my forces reflect this period. I managed to get some of them and with a bit of cut and paste got them to fit my bases, I simply drew the others, I could have drawn them all but it would have taken more time and as you know my patience has limits these days. The divisions are, in no particular order, 15th Scottish (natch), 43rd Wessex, 7th and 11th Armoured for the British and 2nd, 21st, Lehr Panzer Divisions along with 12th SS for the bad guys. If you like these then contact me and I'll send you the .jpg file. 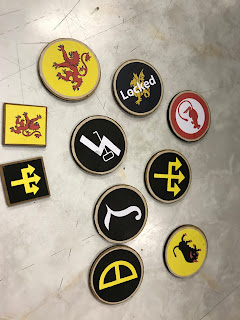 So, how is my new interest in CoC going, I have watched even more videos and have realised that my foray into Operation Martlet using a blend of rules was pretty rubbish, it is either one or the other to be honest. Stuart from the club got in touch and asked me if I would like to do Martlett with CoC, he thought someone was impersonating me on the CoC FB page due to my past comments, so I agreed and we kick off on Thursday hopefully, so I shall have to buckle down over the next few days and read the rules again. I also have a large Napoleonic game organised by Rob and Julian on the 28th coming up as well, Quatre Bras I believe, or part of it.

On the paint tray for now is the bits and pieces for the farm and some other table scatter, I have no large body of troops to paint, next up is another look at stowage for my vehicles then back to more troops, maybe next month.
Posted by George Anderson at 11:01