As you know I didn't make it to the club last week so Rob kindly put off his Muskets and Tomahawks game until this week, he didn't make it either, we had a lot of members AWOL last week it would seem.

Anyway I dragged myself from my sick bed and found myself in charge of a blood curdling mob of Woodland Indians, all beautifully painted by Rob and Stuart, I still feel like jumping into this period every time I see them. The premise was I had just completed a raid on a village and burned it to the ground, those who had survived my depredations had fled into the nearby woods, I now had to scour said woods to find them. Simon on the other hand with a hastily put together rescue party also had to make his way through the woods but this time to find and succour the fugitives. 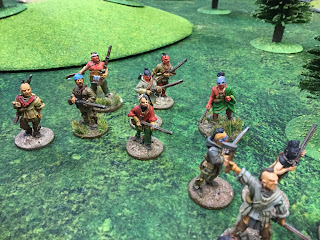 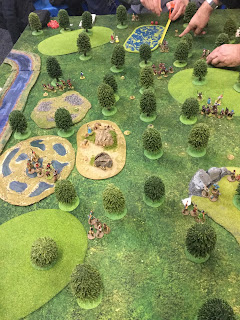 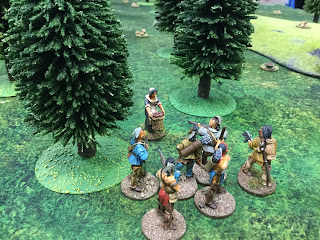 The whole table was covered in trees and difficult ground, scattered around were lots of little markers, these markers once approached were diced for and may be nothing, or one or two of the fugitives. I had the choice of butchering them or taking them prisoner, Simon of course had to protect them and get them safely back to a holding area, game on. 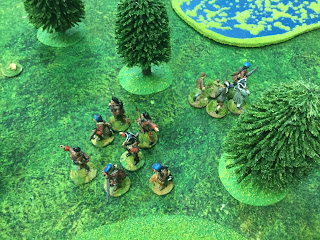 I came upon several fleeing women, servant types and duly killed them, I then ran into two who could obviously handle themselves as they shot one of my braves and caused the others in his party to run. I picked up from some of the things Rob said that these two were the women from 'Last of the Mohicans' and if I killed or captured them I would have Hawkeye and his mates after me so I reluctantly let them go on their merry way. The Gods next rewarded me with a high ranking British officer, he was not going under the knife and he was led to the rear. 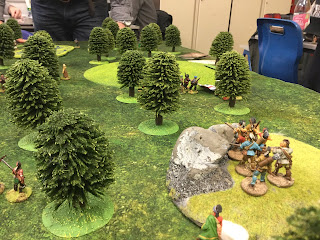 It was now that both sides were fairly close to each other and most of the civilians had been killed, captured or rescued, a stand of Colours had been spied but had got away only to be shot down, this looked like a high value target to both of us. I tried to get into a position to make an assault but the terrain was against me as was my shooting, after some time I had to give up and the flag disappeared back through the forest. I did manage in the last minutes of the game to bag a small party by killing the two soldiers protecting it. Simon also did not have things all his own way, he rescued a senior officer who immediately demanded to be in charge and for a time confused his men (I was given charge of this character if I beat a die roll). He also found a child who slowed his men down and a fight broke out when a drunken lout was flushed out of hiding and set about his rescuers. 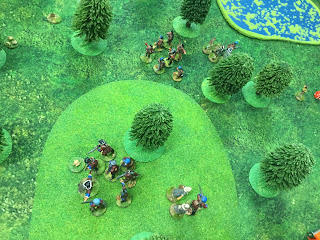 At the end the scores on the doors showed a win for Simon, I could have done much better if I had not killed so many of the fugitives and merely captured them, but hey, I was in character. It was a great idea and once again showed how flexible these rules can be and how you can let your imagination run riot, with this and other scenarios I think Rob should get them published.

My next set of figures are being primed in the outhouse as we speak, I used the recommended super-superglue by someone on Facebook only to find it works no better than other super glues, he obviously has not tried to glue Aventine figures. I went back to using Bicarb as a setting agent and hey presto, job done.

It is Birthday Eve here in the Anderson household, a new holiday I have instigated as King of the Andersons and High Heid Yin of the Clan, it only pertains to the leader of course and means that I should be shown due deference as befits my position and upcoming big day.

We have our club Christmas Game next week, I am not sure what it is yet as it is under wraps, Julian, our star baker will once again be spoiling us with his mince pies. I have already let it be known that this year there should be a more equitable sharing of the goods as last year I only managed to grab one, I think my pleas have fell on deaf ears. 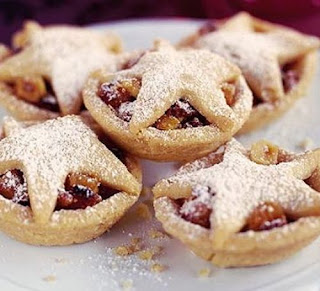 Posted by George Anderson at 09:46