Not as exciting as my red letter day yesterday but wargaming stops for no man.

After an initial setback the German breakout from Konigsberg is gaining traction, the village of Moditten is in German hands and the spearheads are pushing forward, the last Soviet resistance in the area is dug in around a Girls School just a few kilometers further on.

This time the Germans have brought some heavy weapons in the form of a Panzer IV and a PaK40 anti-tank gun knowing that they expect now to run into Russian armour. The Russian defenders are down to two squads but the school is easily defended and is ringed with entrenchments, support is provided by a T34/76, the defenders wish to sell themselves dearly and inflict heavy damage on the attackers. 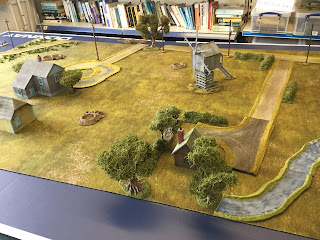 The Boche are attacking from two flanks and the plan is to build a fire base around the old pump house and once the defenders have been softened up the tank will help with the assault, the Soviets merely want to hold out as long as they can. The trenches are manned and the T34 slinks at the back of the school facing the pump house area. The Germans quickly deploy an MG42 and the PaK 40, the latter cannot get a line of sight on the T34 but can lay down fire on the defenders facing it. 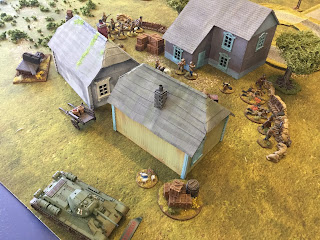 Once again the Russian fire is deadly and the MG42 takes massive casualties and the survivors run for it, the PaK is ineffectual in pinning the defenders, and with the MMG out of the way the Russians now concentrate on the anti-tank gun. To better prepare for the assault the Germans now bring the tank on to open up a secondary front, this again is taking a long time to damage the enemy squad in front of it. The German commander is loathe to bring infantry to the fight as the T34 is patiently sitting waiting for just such an intervention, along with an MMG in the main school building and the very dangerous heavy squad in the trenches. 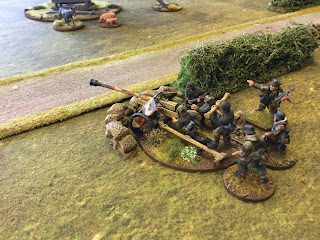 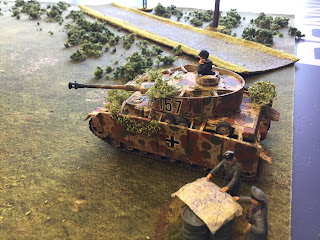 The PaK40 now starts to suffer from concentrated fire and its crew break for the rear. Panzergrenadier now move up to take on the Russians from the pump house, a panzerschreck team curse and wait for the T34 to move or come off overwatch so that they can advance and get a shot off as it would be suicide to just move up. The German commander throws in a Command Dice and as lady luck eventually smiles at the Teutons the Russian heavy squad are cut to pieces and forced to retire. The Russians are now left with one squad and the T34 to defend the school, the platoon commander decides to withdraw before the full weight of the German grenadiers is thrown at him. 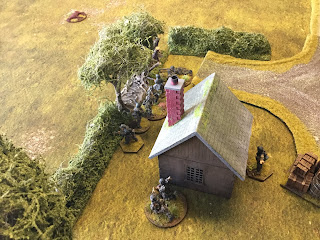 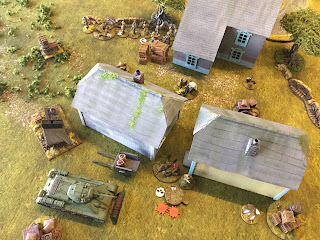 Despite having almost wiped out the German supports the main platoon lost only one man so although again the Russian defence proved tenacious it did not impact the Germans in the way it has done in the last two battles. The Russians again right at the end wound up with fairly heavy casualties, the T34 proved fairly useless but did at least put the fear of god into the German commander for a long time. How did the game go, well the Russian shooting was again pretty spectacular and took out the MMG and the PaK both of which were behind entrenchments, the German command roles again let them down with many phases being just useless to them, again they were forced to bring on their Senior Leader to help with command.

The Germans have nine games to reach their objective at Powayen (Table Six), game four is next on Table Three, they have to take the town of Gardenstadt Metgethen. The Russians are on the back foot for the next game as the Germans bring more forces to bear as their attack gains momentum, after this game I suspect the Soviets will need replacements, they also have a wild card to play after Table Three which they can use to mount a counter-attack.

Posted by George Anderson at 09:10