Road to Bremen VI (Bob loses out on the girl)

As Colonel Bob and his men approached the industrial outskirts of Bremen only the old men and youngsters of the Volksturm stood in his way, would they surrender or fight, Hauptmann Krosbi had survived several combats and evaded the squads carrying out summary executions of 'traitors' in the rear areas and managed to convince the local Gauleiter that he had to make a stand.

I am glad the Volksturm were going to fight otherwise my new industrial buildings would have remained on the shelf until 2525 when the lockdown is lifted. These forces were much weaker than the army and Waffen-SS troops which had gone before and consisted of two infantry squads variably armed with SMG's, assault rifles, rifles and panzerfausts (sadly the old type), in support they had a Pak 36 upgraded with the steilgranate and a panzerschreck. The area was too large for this small force to defend so Krosbi decided to use his forces in the complex nearest the rear and abandon the other. The British kept 1 Platoon in the spearhead as it had taken very little casualties in the last fight, this time two of the infantry squads were carried in halftracks while the heavy support involved one of the remaining Shermans, the plan was to be aggressive and rush forward to overwhelm the defenders. 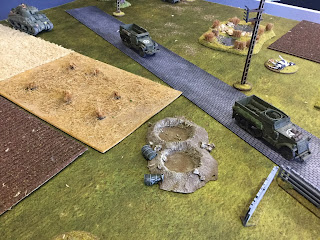 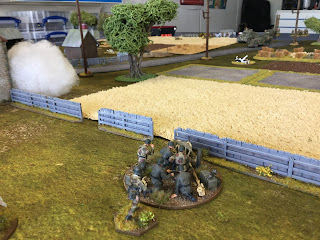 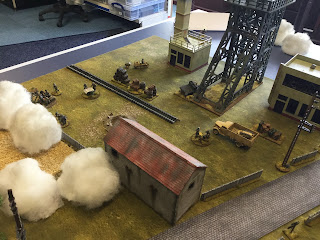 As the Germans waited for the British to show their hand one enemy platoon advanced quickly on the left flank towards the empty complex, once that had arrived the halftracks were ordered forward covered by smoke and the Sherman. Krosbie now brought on his anti-tank assets and they both opened up on the Sherman, over a couple of phases when the smoke cleared they managed to damage the gun sight and kill the gunner while inflicting some shock, but never managed to knock out the Sherman which still managed to support the British attack. It was now time to bring on the Volksturm, however one squad trying to make for one of the buildings took heavy casualties on the way and only just made it to cover, the other defended against the debussed British infantry who had managed to close the gap to the defence line due to smoke cover. These brave men put up a gallant fight against larger odds but soon found themselves whittled down until only Krosbi and the Junior Leader remained standing. 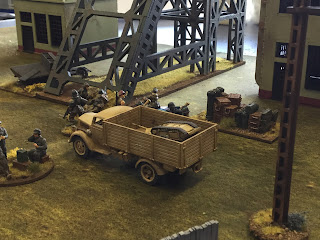 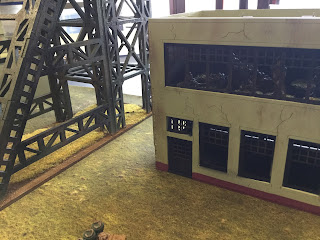 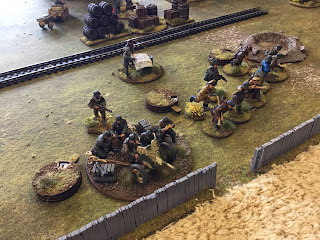 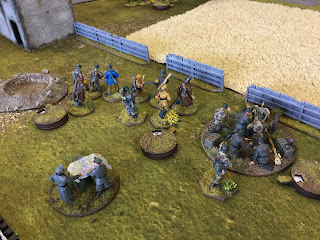 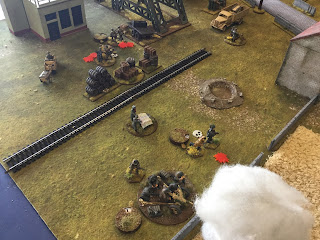 With the writing on the wall the Germans surrendered amid the chaos, in a later interview a wounded Krosbi confirmed there were no more troops between Hope's men and Bremen, the British were relieved. Sadly though the Germans had managed to sneak a minor victory due to their tenacious defence of the Hedge of Death for three turns, well done Matt. The maps are a work in progress, I hope eventually to cover all the vehicles etc. I have and to tart up the terrain, I didn't have time to work with a Pak 36. 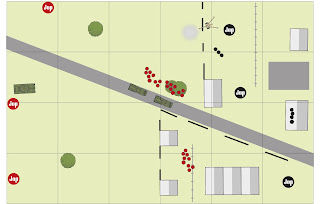 A fitting end to a great little campaign, I was very happy that both my new buildings and Fall of the Reich units made it into combat and very pleased the old men had fought so well considering the odds. The campaign is a very fitting fight for solo gaming as the Germans have to commit all their forces apart from possible reinforcements to certain tables so the onus is on the British to clear the way, my thanks to friend Matt for allocating these. The mechanic whereby the Germans might think twice about dying for Hitler and surrender is also quite brilliant. Could anything improve the game, possibly, I think some of the maps are a bit too open and would have liked more choices for my British support but perhaps as they start with three platoons that would be a bit greedy. This Campaign is in the Lardy 2017 Special and is well worth the few quid, I would like to play this again in a face to face encounter.

I have played quite a bit of Chain of Command since the lockdown and during these games introduced several house rules from the Lardy Forums, some worked, others I dropped. The big one is how to reduce the effect of one side getting two or more phases in a row, I tried dropping a die for every subsequent phase but all this did was limit the amount of orders you could give and actually stopped you taking advantage of the double or triple phase. I found the best way to limit this was not to let anyone fire twice, this means you cannot simply wipe out an enemy squad with impunity and you can focus on maneuver more, both players are then happy, or happyish. I also made the mortar blast area a 9" circle rather than a square, not a huge difference but a bit better, I might also try an 8" beaten zone, again a circle at some point. I also allow pinned troops to move away from the enemy without losing movement to shock. I had also at one stage introduced a sixth die for the attackers, this really didn't work for me mostly because I was just unlucky with the throws, managing to get 4, 5 or 6 with it which in the event were useless, but I still think in some games it is worth considering, especially in games where the attacker has a lot of support, too much to manage with five dice.

As you know I did not have a Pak 36 to use with this campaign so just had to buy one, and as luck would have it Matt rolled one for support in the last game, so I spent a couple of days getting it ready. The kit is from Rubicon and is an excellent model, a lovely little gun with five crew, it is marked as early war but I wanted it as a last ditch weapon used during the late war by garrisons and ad hoc units in the paths of the invaders. To this end I gave it a late war camo scheme and painted two of the crew in camo jackets so that they fit better with my existing Volksturm and Volksgrenadiers, I am happy with the result. You get a steilgrenate with the gun which is what allowed it to be used until the end of the war and the new ammo could penetrate 180mm of armour (basically all Allied tanks) at close range, I decided not to fit the grenade but leave it on an ammo box just to remind me the gun had one.The crew are also far better than the normal 'Ken doll' types you get with Rubicon, and you get five! 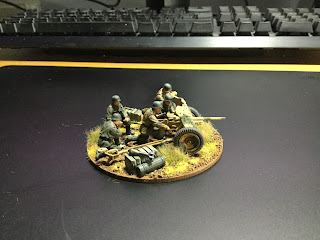 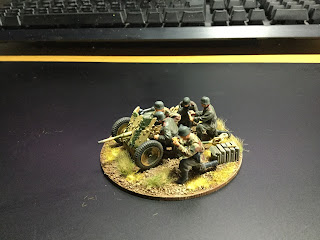 Posted by George Anderson at 10:39